Rex W. Tillerson, chairman and CEO of ExxonMobil Corp. for the past decade, is being floated by President-elect Trump as his pick for secretary of state. 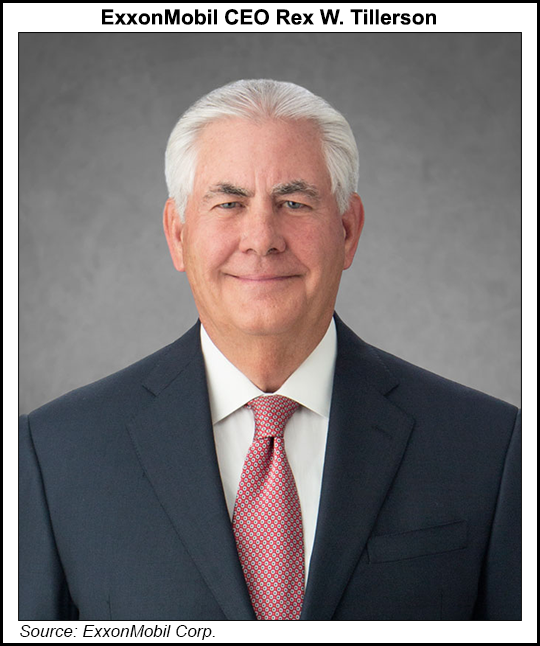 As the chief of the largest publicly traded international oil and gas company in the world, Tillerson, 64, is ExxonMobil’s top ambassador, well traveled and respected around the globe. The dark horse candidate, who has never held any public office, would be fourth in line to the presidency if he were to become the nation’s leading diplomat.

“He’s much more than a business executive,” Trump said of Tillerson in a television interview over the weekend. “He’s a world-class player.”

Tillerson’s selection would require confirmation by the Senate, and some Republican and Democratic members expressed concern over his relationship with Russian leader Vladimir Putin. ExxonMobil has key developments underway with state-owned oil companies.

The partnerships with Russia, forged since Tillerson took over, and the producer’s developments in hot spots around the globe — with friends and foes to the United States — may cause closer scrutiny of Tillerson than other better known candidates, with policy experience, would have.

Some of Tillerson’s views also would appear to be at odds with his future boss. For example, Tillerson, who has worked for ExxonMobil and predecessor companies his entire career, long has advocated that Congress consider enacting a revenue-neutral carbon tax to help limit greenhouse gas emissions. He also believes in climate change.

“I firmly believe it is not too late for Congress to consider a carbon tax as the better policy approach for addressing the risks of climate change,” he said in a 2009 speech. “Indeed, there has never been a more opportune time for Congress to pursue this course of action.”

Tillerson has made a compelling case over the last 10 years that fossil fuels contribute to climate change. The company now is facing allegations that it misled investors — before Tillerson took over — about how its oil and gas operations may impact temperatures.

But he has faced down adversaries in industry and among the shareholders, and he is rarely ruffled. During an arduous annual meeting in May, when shareholders took Tillerson to task for more than two hours regarding climate change policies, he forcefully argued that management lived in the “real world.”

There is “no room,” he said, between ExxonMobil’s stance and that of the United Nations’ Intergovernmental Panel on Climate Change (IPCC), which in 2014 concluded that emissions were at unprecedented levels and urged stringent strategies be undertaken by business.

“Our difference on policy choices are, I think, one that is grounded in reality,” he told shareholders last spring. “And the reality is, there is no alternative energy source known on the planet that is available to us today to replace the pervasiveness of fossil fuels in our global economy and in our very quality of life — and I would go beyond that and say our very survival.” The judgment is a “balance between future climatic events, which could prove to be catastrophic — but are unknown by the IPCC’s own acknowledgement — and more immediate needs of humanity today to address poverty, starvation, broad-based disease control and the quality of life that billions of people are still living in today, which is unacceptable to many of us.”

The “only way out of that is to provide them the energy sources we have today,” Tillerson told shareholders. “And that’s why we continue to believe fossil fuels will have a significant and important role to play for as far as we can see. No government studies disagree with that.”

In addition to being the No. 1 natural gas producer in North America and a leading oil producer, ExxonMobil’s operations are stretched around the world through the Americas, Europe, Middle East/North Africa, Subsaharan Africa and in the Asia Pacific.

Russia’s oil and gas reserves, controlled by the state, have been a big target in the past few years. In 2011 Tillerson helped to forge an agreement with Russia’s OAO Rosneft to jointly explore and develop projects in the tight oil fields of Texas and the Gulf of Mexico, as well as in Russia and other countries around the world. The two oil giants also agreed to share technology in the wide-ranging transaction. A year later the partners agreed to develop oil reserves in Western Siberia.

The Texas native, who was born in Wichita Falls, earned a bachelor of science degree in civil engineering at the University of Texas at Austin (UT). He joined predecessor Exxon Company U.S.A. in 1975 as a production engineer. He was tapped as general manager of the central production division in 1989, which gave him oversight for oil and gas production operations across a large swath of Texas, Oklahoma, Arkansas and Kansas.

The former Eagle Scout is immediate past national president of the Boy Scouts of America. During his tenure and his advocacy, the organization embraced members who identified as gay.

He currently is vice-chairman of the Ford’s Theatre Society and is a former director of the United Negro College Fund. Tillerson also is a member of UT’s Chancellor’s Council, Development Board and the Engineering Advisory Board, and was named a distinguished alumnus in 2007. In 2011, he received an honorary doctorate engineering degree from the Worcester Polytechnic Institute.

Environmental groups, some of which are behind the #ExxonKnew campaign to uncover the company’s “history of climate deception,” took Tillerson’s nomination as an affront.

“This is unfathomable,” said 350.org Executive Director May Boeve. “We can’t let Trump put the world’s largest oil company in charge of our international climate policy. Tillerson may be a friend of Putin’s, but he’s no friend of the planet. ExxonMobil is still a leading funder of climate denial and is pursuing a business plan that will destroy our future. Tillerson deserves a federal investigation, not federal office.

“We’ll be pressuring senators to turn the confirmation process into a hearing on ExxonMobil’s history of climate deception. If Exxon is found guilty of working with other oil companies to deceive the public and their shareholders about the threat of climate change, they could be on the hook for fraud and racketeering charges. It would be the largest corporate scandal in history and could not only stop Tillerson’s appointment, but take down the entire company.”

Under ExxonMobil’s mandatory retirement age of 65, Tillerson would be stepping down as CEO in 2017. The company offered no comment about any transition plans that may be in place. However, a deep bench of talent surrounds Tillerson, led by principal financial officer Andrew P. Swiger, ExxonMobil President Darren W. Woods and Senior Vice Presidents (SVP) Michael J. Dolan, Jack P. Williams and Mark W. Albers.

Swiger joined the company in 1978 as an operations engineer and was named executive vice president (EVP) of ExxonMobil Production Co. in 2004. He was promoted to president of ExxonMobil Gas & Power Marketing in 2006 and named SVP of the corporation in 2009.

Wichita-native Woods joined Exxon Company International in 1992 as a planning analyst and in 2005 became vice president of ExxonMobil Chemical Co. He was appointed vice president of the corporation in 2012 and named SVP in 2014. Early this year he was elected president and appointed to the board.

Dolan joined Mobil Oil Corp. in 1980 and was promoted to the worldwide petrochemicals division in 1993. He became president in 2004 of ExxonMobil Chemical and in 2008 was appointed SVP of the corporation.

Williams, an Ohio native, joined Exxon in April 1987 as a drilling engineer. In 2010 he was named president of ExxonMobil’s North American onshore subsidiary XTO Energy Inc. and in 2013 was named EVP of the production unit. Two years ago he was elected as SVP.

Albers, a Calgary native, joined the company in 1979. He became president of ExxonMobil Development Co. in October 2004 and elected SVP of the corporation in April 2007.