Tilbury LNG has become the sixth active Canadian LNG export project to enlist the native community as a site supporter and potential part-owner. 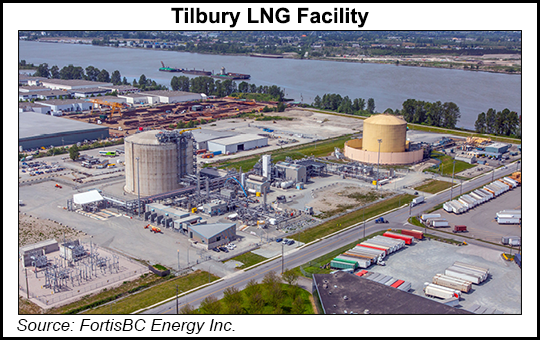 Sponsor FortisBC Holdings Inc. and the Musqueam Indian Band announced a planning, regulatory approval and possible investment agreement for the project in the Vancouver suburb of Delta.

Such partnerships are becoming common in British Columbia (BC) and elsewhere in Canada as the support of First Nations is proving crucial to getting long-planned liquefied natural gas export projects off the ground.

The Haisla Nation and Pembina Pipeline Corp. are in alliance on the Cedar LNG at Kitimat, BC. Squamish Nation and Pacific Energy Corp. are working on the Woodfibre LNG venture north of Vancouver.

In addition, Nisga’a Nation and gas producers are partnering in the Ksi Lisims LNG at Prince Rupert, BC. There also are tribes in alliance for the Coastal GasLink pipeline for LNG Canada at Kitimat.

On Canada’s east coast, Miawpukek First Nation has teamed up with LNG Newfoundland & Labrador Ltd. on a proposal to export tanker cargoes of byproduct gas that offshore oil platforms store under the sea floor of St. John’s.

Cross-cultural alliances of industry and natives across Canada have emerged as standard practice after the defunct Mackenzie Gas Project enlisted tribes as prospective ownership partners in a proposed arctic pipeline during the early 2000s.The northern project died of delays and competition as reserves from the onshore gas fields grew.

In the Tilbury LNG case, Musqueam chief Wayne Sparrow expressed the native view of partnerships with industry in a nutshell.

“For thousands of years, Musqueam has lived along a trading route and supported trade in the region,” he said. “Through our relationship with FortisBC, we are building on this strength while being leaders in energy stability and ensuring benefits for future generations.”

The Tilbury plan, now seeking approval by the BC Environmental Assessment Office, calls for exports of up to 325 MMcf/d. The project is forecast to cost C$3-3.5 billion ($2.4-2.8 billion).

FortisBC, the province’s primary gas distribution company, has operated a modest LNG plant at the proposed Delta terminal site since 1971 as a supply supplement for periods of peak demand in its Vancouver franchise area.

Gradual expansion of the operation is advancing as a Vancouver Harbor LNG marine fuel dealership for ferries and freighters. Ships are projected to cut greenhouse gas (GHG) emissions by replacing diesel with cleaner-burning gas.

The Delta project would have a competitive edge on markets expected to demand deepening cuts of GHG emissions associated with all energy projects, said FortisBC president Roger Dall’Antonia.

Thanks to connections to government-owned BC Hydro dams, “Tilbury is powered by renewable hydroelectricity, which means it can produce LNG that is nearly 30% less carbon intensive than the average global LNG,” Dall’Antonia said.