Winners were able to maintain a slight numerical advantage over losers, but when the averages were tallied the NGI Weekly Spot Gas Average came in at $4.21, down 6 cents for the week ended May 23. Most points were within a dime of unchanged. Of the actively traded points, Tennessee Zone 4 Marcellus made the greatest gains adding 12 cents to $2.24, but Northeast losses were far greater. Weekly quotes on Iroquois Zone 2 fell 37 cents to $4.22 and were closely followed by a decline of 34 cents to $3.54 at the Algonquin Citygates. 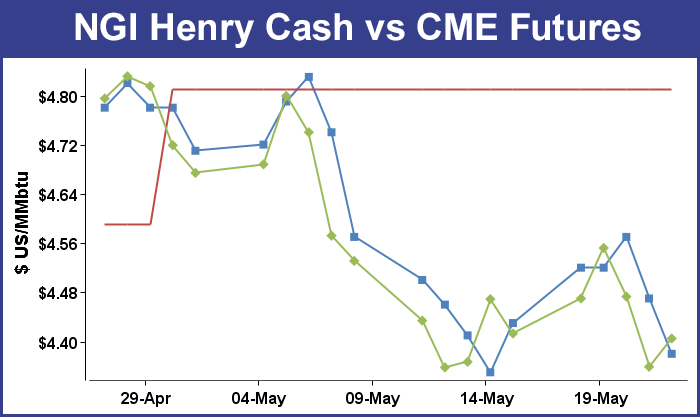 Regional changes were also held to a dime or less. The Northeast and California posted the largest losses of 10 cents to $3.46 and $4.65, respectively, and the Rocky Mountains shed 4 cents to $4.25.

In Friday’s trading buyers saw little risk in being caught short of gas Tuesday following the extended Memorial Day weekend and prices fell across the board. Every market point followed by NGI dropped into the loss column, with eastern and northeast points posting double-digit declines. Benign weather patterns were in place across the country, but futures managed a modest gain. At the close June had gained 4.6 cents to $4.405 and July had added 4.8 cents also to $4.405.

Market players Thursday got a taste of just how polarized the bulls and bears are when the Energy Information Administration (EIA) released its weekly storage report. Expectations were for a build of about 102 Bcf, but the actual figure came in just 4 Bcf higher at 106 Bcf. Prices tanked and June futures ultimately ended up down 11.4 cents on the day at $4.359.

“This sizable price reaction to a storage figure barely removed from street ideas underscores a lot of pushing and pulling that has been taking place in this market all month,” said Jim Ritterbusch of Ritterbusch and Associates in closing comments Thursday to clients.

“The bears remain adamant in an opinion that production will come to the rescue in this market in the coming months in accelerating enough into record territory to erase the bulk of the current supply deficit. The bulls, on the other hand, still see storage some 43% below five-year average levels and continue to see a market capable of spiking viciously to the upside on first indication of sustainable hot temperatures or even minor supply disruptions.”

One of those bulls is Teri Viswanath, director of commodity strategy for natural gas at BNP Paribas. She sees problems with a timely rebuild of working gas inventories. “According to EIA, working gas in storage stood at 1,266 Bcf as of last Friday or a net stock increase of 106 Bcf,” said Viswanath. “This compares to last year’s injection of 90 Bcf for the same week and indicates that supply/demand balances are currently 2.29 Bcf/d looser than year-ago levels. In the event that the industry can maintain this supply advantage, working gas in storage would rise to 3.419 Tcf by end October.”

She’s not buying that outcome. “However, we expect that stocks will ultimately fall short of this level as electric power demand growth reduces the surplus supply available for restocking. We note that electric power demand has increased nearly every summer, despite the seasonal variability in the total generation and competing fuel prices. A closer look at the disaggregated monthly generation data reveals the fact that natural gas plants have steadily increased market share over the past several summers. While this trend in dispatch is particularly noteworthy for shoulder periods (April-June and September-October), we also see a marked increase occurring during the peak months (July-August).

“Perhaps the most important contribution to resilient utility summer demand is the structural change in dispatch. Since 2008, 25.5 GWs of coal capacity has been retired. Between now and the end of 2015, this figure will double as units are idled in advance of the implementation of new federal regulations. Many of the units that have, or will be, retired played a critical role in serving either mid-merit or peak load obligations. The removal of these units from the stack has significantly favored the operation of natural gas-fired generators.”

Once the smoke cleared following the release of the inventory data, traders realized that in the bigger picture not much had changed. “Traders were saying anything over 100 Bcf was bearish, and under 100 Bcf bullish so we made a new low for the day when the number came out. Nothing has really changed, we are still stuck in a range from $4.25 on the downside to $4.75 on the upside,” said a New York floor trader.

Inventories now stand at 1,266 Bcf and are 774 Bcf less than last year and 943 Bcf below the 5-year average. In the East Region 65 Bcf were injected and the West Region saw inventories up by 12 Bcf. Inventories in the Producing Region rose by 29 Bcf.

Ritterbusch is also looking higher. “Rather than attempting to anticipate every 3-4% price swing, we have laid out a trading theme in which prices will eventually rotate higher and possibly approach the $5 mark depending upon early summer weather events,” he said. “At the same time, we have advised selectivity in approaching the market strictly on price pullbacks and we have suggested the $4.40-4.45 zone as appealing in this regard.

“We would suggest holding any long positions within the summer portion of the curve while advising stop protection below $4.29 on a close-only basis using the nearby contract as a reference. We don’t expect much downside price follow-through [Friday] as existing shorts will likely be more interested in accepting profits ahead of a long weekend rather than adding to bearish holdings.”

Tudor, Pickering, Holt & Co. analysts Dave Pursell and Brandon Blossman said Thursday morning that they still believe storage will reach 3.6 Tcf by the end of the refill season in mid-November.

Pursell and Blossman said a combo of normal weather and gas-to-coal switching is needed to get to 3.6 Tcf. “The main show will be gas power gen market share as summer weather heats up. What if we see above normal temperatures? Then storage likely trends closer to 3.4 Tcf and have to acknowledge a more bullish 2015 price outcome (say $4.5/Mcf-plus). With normal weather, 3.6 Tcf is achievable and 2015 priced at $4/Mcf is more likely.”

The TPH analysts said supply is currently setting up to surprise to the upside, with all the year-over-year growth coming from the Northeast currently, with the more recent sequential growth occurring in nearly all regions.

“Current data indicates we are running at 3-plus Bcf/d of incremental year-over-year gas supply. Supply is up 4-plus Bcf/d from the Northeast, but netting back to 3 Bcf/d largely on Gulf Coast onshore declines. The recent trend is for sequential growth from most regions with the last couple of months showing 500 MMcf/d of incremental production driven by smallish contributions across all non-eastern basins. Much of this looks to be seasonal recovery but, if the trend continues, Producing and West storage levels will be incrementally easier to refill, driving summer 2014 Henry Hub prices lower.”

Prices in the East and Northeast Friday fell hard as temperatures in many locations were forecast to have a hard time climbing above normal. The National Weather Service in suburban Philadelphia said, “an upper air disturbance will cross the area this evening [Friday]…followed by another one on Saturday. High pressure will build across the area Sunday and Monday. A cold front…associated with low pressure over Canada…will cross the area Tuesday into early Wednesday. More high pressure will follow for later next week.”

Wunderground.com predicted that the high in Boston Friday of 58 degrees would warm to 60 on Saturday and 77 by Monday. The normal high in Boston this time of year is 68. New York City’s high Friday of 67 was anticipated to rise to all of 71 Saturday before making it to 83 on Monday. The seasonal high in New York this time of year is 73. Philadelphia’s 73 high on Friday was expected to ease to 72 Saturday before also reaching 83 on Monday. The normal late-May high in Philadelphia is 70.

At the Algonquin Citygates trading for the extended weekend saw prices plunge 47 cents to $3.09, and on Iroquois Waddington deliveries dropped 31 cents to $3.96. Gas on Tennessee Zone 6 200 L retreated 24 cents to $3.48.

In the Mid-Atlantic, prices also took some double-digit hits. Gas headed for New York City on Transco Zone 6 for the extended weekend fell 25 cents to $2.93, and gas on Tetco M-3 shed 21 cents to $2.96.

With the proliferation of gas from the Marcellus turning traditional pricing upside down, judging just by extended weekend gas prices the traditional producing region of the Gulf Coast would be the place to send gas. Some Gulf points were well over $1 higher than the East Coast. Gas on ANR SE for the weekend and holiday period shed 8 cents to $4.27, and gas on Columbia Gulf Mainline was down 7 cents to $4.30. Gas at the Henry Hub also slid 9 cents to $4.38, and packages at Transco Zone 3 were 8 cents lower at $4.35. On Tennessee 500 L parcels for the weekend shed 7 cents to $4.35.

The Midcontinent also lost ground, but like the Gulf retained a premium to East Coast locations. Gas on ANR SW was seen 14 cents lower at $4.16, and gas at the NGPL Midcontinent Pool was lower by 10 cents to $4.20. On OGT weekend, Monday and Tuesday gas fell 8 cents to $4.07, and on Panhandle Eastern gas changed hands at $4.05, down 12 cents.