Weekly cash prices climbed alongside a surge in demand early in the period, production concerns and a momentous futures market rally. 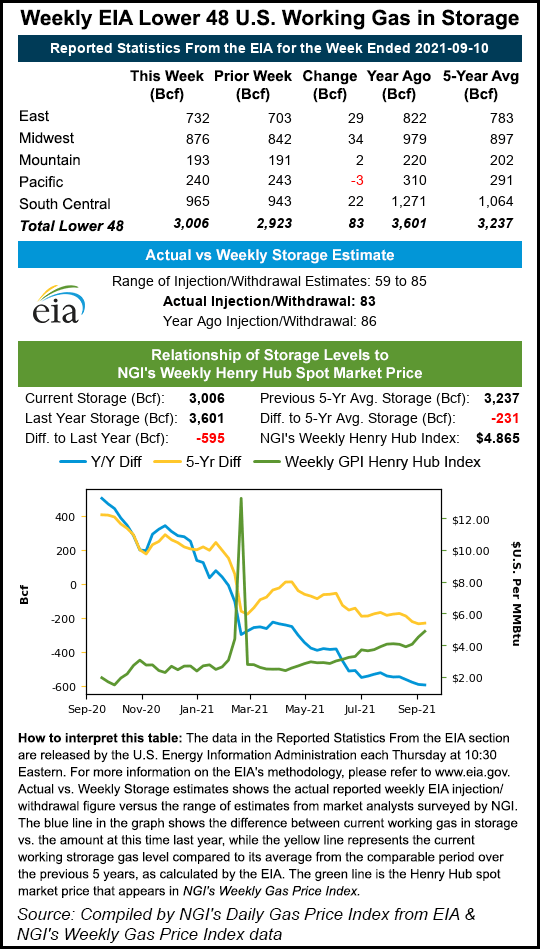 Temperatures were lofty through much of the week, with highs in the 80s and 90s in the Midwest, East and swaths of the West. Stretches of the Southwest and Southern California were baked with triple-digit highs, fueling robust cooling demand late in the final swing of summer.

Bespoke Weather Services said that, while notable heating-degree day levels often arrive by mid-September in the northern United States, that has not been the case to date in 2021. Cooling-degree days, however, remain above normal and continue to drive solid demand for natural gas in the physical markets.

NGI’s Weekly Spot Gas National Avg. for the September 13-17 period jumped 32.5 cents to $5.320, led higher by a burst in demand and soaring prices over the first three days of the trading week. In that span, cash prices spiked 67 cents.

Meanwhile, fueled by strong late-summer demand and the potential for a supply crunch in the United States and Europe ahead of winter, the October Nymex futures contract rallied furiously over the first three days of the week, gaining more than 50 cents and reaching both a 2021 peak and a seven-year high on Wednesday. That burst was more than enough to propel a weekly gain despite a pullback on Thursday and Friday.

The prompt month settled at $5.105/MMBtu to finish the trading week on Friday, up more than 3% from the prior week’s finish. Futures advanced 5% the previous week.

Forecasters anticipated a lull in weather demand over the final days of September, given cool fronts in the Northern Plains and moderating temperatures elsewhere. But in the wake of Hurricane Ida and Hurricane Nicholas earlier this month, natural gas production in the Gulf of Mexico remained lower than it did in August, adding to already simmering concerns about supplies.

U.S. production was light relative to pre-pandemic levels before Ida, which struck the U.S. on Aug. 29 and was followed by Nicholas at the start of the past week. Output hovered near 90 Bcf in recent days – well below the 92 Bcf/d average reached earlier in the summer and far below the 96 Bcf/d peak level prior to the arrival of the coronavirus.

Against that backdrop, bulls may still have room to roam in the week ahead, though price swings in either direction are likely as summer demand starts to fade, Bespoke said.

Early winter conditions are “still a few weeks away,” the firm said, and trading could prove “quite volatile until we reach that point.”

Natural gas futures rallied three consecutive sessions to kick off the week, touching highs for the year each day as traders focused on the possibility of sparse supplies in the United States and Europe ahead of the looming winter season, when demand for gas typically peaks.

In addition to strong domestic consumption over the summer and production limits imposed by the recent storms, liquefied natural gas (LNG) export levels have been elevated for months, fueled by demand from Asia and Europe. Supplies of gas in Europe, in particular, are precariously light, necessitating steady calls for Lower 48 exports to replenish stockpiles for winter.

Analysts say that if demand proves exceptionally strong this winter, U.S. supplies of gas needed to heat homes and business could be low.

“Usually, as the weather cools heading into fall, so do prices, but that’s unlikely this year as the European gas storage inventory is at the lowest level for this time of year than we’ve seen in recent history, and the time to replenish stocks for the winter is rapidly running out,” said RBN Energy LLC analyst Lindsay Schneider.

Futures did pull back later in the week after the U.S. Energy Information Administration (EIA) on Thursday reported an injection of 83 Bcf into natural gas storage for the week ended Sept. 10.

NGI estimated a 72 Bcf increase for the report. The prior five-year average was an increase of 79 Bcf.

The injection topped analysts’ expectations and markets received the result as an indicator of stronger builds to come this fall. Several previous storage reports were bearish relative to expectations.

Participants on The Desk’s online energy platform Enelyst said Ida’s lingering effects – cooling rains and flooding — appeared to impact not only output but demand during the covered week more than expected. That resulted in a solid increase in South Central storage, in addition to gains in the Midwest and East, and at least temporarily eased supply concerns.

The build for the Sept. 10 week lifted inventories to 3,006 Bcf and put the market on track for 3.5 Tcf in storage for winter.

However, those figures compare meekly to 2020. Stocks totaled 3,601 Bcf a year earlier and the five-year average was 3,237 Bcf. At the end of injection season last year, supplies stood at 3.9 Tcf.

If the winter starts early or is exceptionally cold, supplies could run low and prices could escalate. “My new view is that oil and gas prices are just gearing up,” The Desk’s John Sodergreen said. “This winter will be a doozie.”

NatGasWeather said Friday forecasts pointed to steady weather-driven demand through the weekend and into the start of the next trading week. However, by midweek and through the remainder of September, most of the United States is expected to experience “perfect highs of 70s and 80s besides locally hotter 90s across the Southwest and cooler 60s over the Northern Plains.”

With that on the horizon, cash prices retreated from lofty highs reached earlier in the week.

For the week ahead specifically, NatGasWeather said the Midwest and Northeast “will be comfortable with highs of 70s to 80s as weak cool fronts track through with showers,” while California to West Texas will be hot “with highs of upper 80s to 100s as high pressure rules.”

In the final week of the month, the southern part of the country is projected to be warm – though pleasant with highs in the 80s in many markets – and the Midwest to Northeast are forecasted to experience mild temperatures in the 70s and low 80s. While still hot in the Southwest and parts of California, the Northwest and Rockies “will be mild and showery early with highs of 60s-70s as Pacific systems track through,” NatGasWeather said.

Overall, the forecaster said, “weather patterns are quite bearish the next 15 days for the lightest national demand in months.”

“As far as the tropics,” the firm added Friday, “Nicholas has fizzled but there remain a couple other tropical systems of interest, with one grazing the Mid-Atlantic Coast the next couple days, while a second system tracks toward the Caribbean this weekend,” but it is “unlikely to hold a course toward the U.S.”