Natural gas futures quickly bounced back from the prior day’s nosedive as traders were hopeful Gulf Coast exports would soon resume full operations after a barge sunk near a key export terminal. Buoyed further by the latest government storage data, the November futures contract jumped 13.9 cents to $2.775/MMBtu. December climbed 7.2 cents to $3.261. 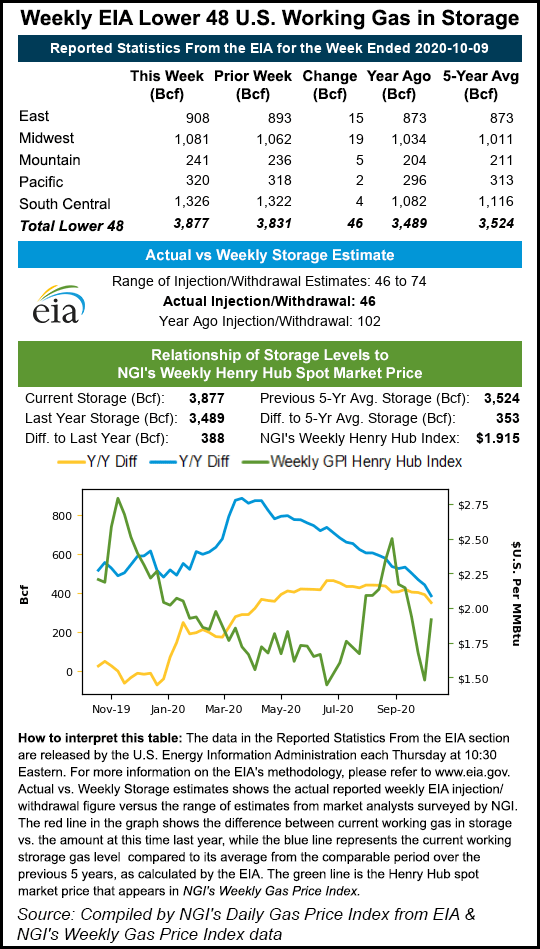 Spot gas prices were stronger across the vast majority of the country. NGI’s Spot Gas National Avg. tacked on 9.0 cents to $2.080.

Erratic trading continued in the futures market, with extensive buying following Wednesday’s sell-off on the sunken barge news and some warmer trends in the weather data. Thursday brought about a solid step back higher as models reverted back colder, and there may be some LNG optimism, given that volumes have held steady over 7.5 Bcf, according to Bespoke Weather Services. However, the exact timetable for the return of the Cameron liquefied natural gas (LNG) terminal is not yet clear, and more volatility is likely until that happens.

Cameron continues to take in around 600,000 Mcf of feed gas, but full utilization of the terminal remains unclear. Late Tuesday, a sunk barge was discovered in the Calcasieu Ship Channel. The barge was one of three obstructions said to be in the channel, including an oil rig and a recreational boat.

The latest government storage report also factored into Thursday’s price action. The Energy Information Administration (EIA) reported a surprising low-side 46 Bcf injection into natural gas storage inventories for the week ending Oct. 9. Although the figure was well below consensus, Bespoke chief analyst Brian Lovern said the market seemed to be expecting a lower number, as the rally off the report was very short lived. “We did see some warmer changes in the midday Global Ensemble Forecast System, however, which may also have played some role in the pullback from the highs,” he said.

NatGasWeather said the latest run of the American ensemble data gave back much of the demand it gained overnight, primarily because projected cold air was focused over the Rockies and northern Plains instead of the Great Lakes and Ohio Valley. However, the firm cautioned that the weather data beyond Oct. 23 has been “inconsistent and subject to big swings.”

Lovern said “things are quite tricky from here,” and much will depend on the weather pattern as the market transitions into the more “weather-heavy” time of year. “We have been expecting a warmer shift to end the month and start November, owing to our analogs based on the global state, of which the La Niña phenomenon is a large part of, but we admit lower confidence in this idea right now.”

Lovern said September and October have deviated from what these analogs had been pointing toward, and medium range guidance has not been consistent. As such, the forecaster needs more consistency before gaining confidence either way.

“This, along with uncertainty regarding Cameron’s return, likely means more back and forth price volatility is yet to come, at least until there is clarity in these issues.”

Cooler weather in the western half of the United States, and continued heat out West, propped up cash prices across most of the Lower 48.

Prices in the Midwest were stronger. Chicago Citygate next-day gas climbed 13.5 cents to $2.210.

The higher prices were on the back of cooler outlooks for the region for the next several days. NatGasWeather said chilly Canadian air was expected to send overnight lows in the Midwest into the 10s to 30s. Though the eastern states were expected to remain fairly mild, the chilly nights through the weekend across the Midwest and Ohio Valley were expected to drive up national demand.

Meanwhile, recent weather model runs have shifted some of the cold forecast for next Tuesday-Friday farther west, limiting the demand boost for next week, according to the forecaster. However, data was colder with weather systems into the Midwest and Northeast in the final days of October. “This is a bit of change compared to Wednesday’s data that had the East warmer.”

Spot gas prices throughout the Gulf Coast also posted double-digit gains as LNG demand is set to increase now that Kinder Morgan Inc. has returned two more compressor stations along Natural Gas Pipeline Co. of America. Although the force majeure it implemented ahead of Delta remains in force, the added throughput could add a significant chunk of demand.

Over in the Rockies, Northwest Sumas moved against the pack, falling $1.065 to $3.025 despite more maintenance-induced gas flow restrictions in the region. Genscape Inc. analyst Joseph Bernardi said maintenance beginning Friday on Northwest Pipeline (NWPL) would cut about 280 MMcf/d of east-to-west flows through southern Washington, isolating the portion of NWPL’s system serving demand in Seattle and Portland.

Planned maintenance requires cutouts of the pipeline between Goldendale and Willard, WA, taking operational capacity through this segment to zero. The work is scheduled to last through next Tuesday (Oct. 20), forcing NWPL to source alternative molecules for supply to the Seattle-Portland demand corridor because the affected section of pipeline is the only connection between those demand centers and the rest of NWPL’s system to the east, according to Bernardi.

“East-to-west flows here have averaged 282 MMcf/d in the past 30 days and showed signs of decreasing already during initial cycles for Thursday’s gas day,” the analyst said. “The two main sources to make up these lost flows are the Sumas border point and Jackson Prairie storage.”