Three bills that if enacted would place a moratorium on using hydraulic fracturing (fracking) in drilling operations, as well as review oil and gas drilling practices, have advanced in the California legislature along partisan lines in a body dominated by Democrats. 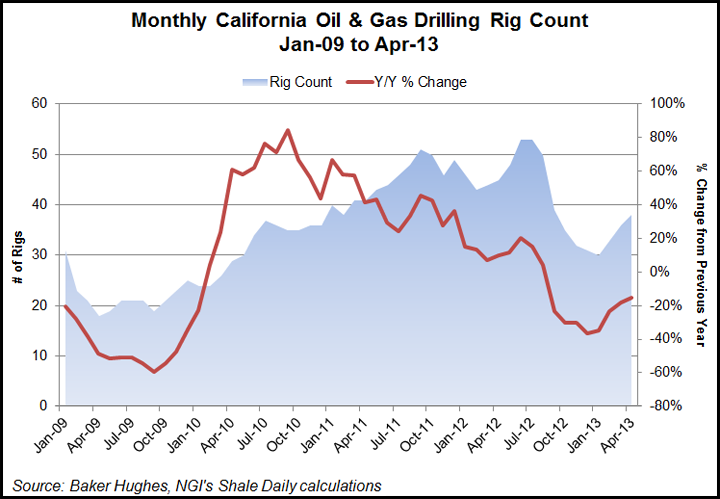 All three passed out of the Assembly Natural Resources Committee on 5-3 votes Monday, the five Democratic majority members supporting the bills and the three minority Republicans opposing them.

During a heated hearing, energy industry representatives challenged environmental representatives about past environmental impacts and water contamination that may have resulted from using fracking during horizontal drilling. A Western States Petroleum Association (WSPA) representative noted that the practice had been used for more than 60 years in California with no confirmed problems and could inject a “chilling effect” on future state investments, according to the Los Angeles Times.

According to Baker Hughes data and NGI’s Shale Daily calculations, the number of rigs operating within California’s boundaries has fluctuated greatly over the last four years. For example, there were only 18 rigs drilling for oil or natural gas in April 2009, but there were 53 in the hunt in July 2012. Last April there were 38 rigs in operation, down 16% from the 45 rigs in operation during April 2012.

Two of the bills (AB 1301 and 1323) would impose a moratorium on fracking while more review and study is done. AB 649 and AB 1323 both also call for creating an advisory committee to review health, environmental, economic and other effects. The state’s Department of Conservation’s Division of Oil, Gas and Geothermal Resources (DOGGR) currently is holding hearings around the state on a set of proposed rules governing fracking that could be finalized some time next year (see Shale Daily, Dec. 21, 2012).

AB 1323 sponsor Assemblywoman Holly Mitchell (D-Los Angeles) has said that scientific studies have pointed to a range of environmental and health impacts. Many of her constituents live near the active Inglewood oilfield (Shale Daily, Oct. 12, 2012; June 26, 2012). Mitchell also is sponsoring AB 649, which would give state officials until January 2019 to decide if fracking may be reinstated in California if the moratorium is imposed.