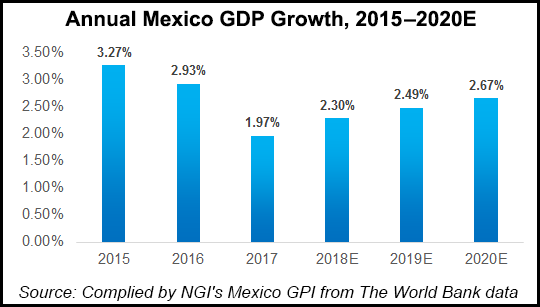 Prud’homme was central to the development of Cenagas, the nation’s natural gas pipeline operator, an entity formed in 2015 as part of the energy reform process. He began his career at national oil company PetrÃ³leos Mexicanos (Pemex), worked for 14 years at the Energy Regulatory Commission (CRE), rising to be chief economist, and from July 2015 through February served as the ISO Chief Officer for Cenagas, where he oversaw the technical, commercial and economic management of the nascent Natural Gas Integrated System (Sistrangas).

The opinions and positions expressed by Prud’homme in the following column do not necessarily reflect the views of NGI’s Mexico Gas Price Index.

The far-reaching energy reform put into place between 2013 and 2014 in Mexico entailed a promise: that the opening to private investment and the promotion of competition in the only sector that had remained closed in Mexico would lead to greater growth, more jobs and lower prices of electricity, natural gas for domestic use and gasoline.

Among many factors that explain last year’s electoral defeat of the political group that promoted the opening of the energy sector is the failure of that promise. An abrupt increase in the price of gasoline in January 2017 — the “gasolinazo” — caused widespread anger and invalidated the energy reform in the eyes of the public. The advances and benefits that were achieved as a result of the reform became invisible, its relevance limited to specialized groups.

In the gas sector, the creation of an independent organization such as pipeline operator Centro Nacional de Control del Gas Natural (Cenagas) and the substantial growth in the length and capacity of the gas pipeline network that runs through the country have also gone largely unnoticed.

But the changes have been crucial and vast. For the first time, decades after the opening to private investment in 1995, the main pipeline system in Mexico offers open access to third parties, firm capacity is being assigned through an open season, and the decoupling of the molecule and transport services (unbundling) has been achieved.

Although perfectible, general terms and conditions for transport have been applied effectively, limiting discretionary treatment of users by providing clarity in their rights and obligations, thus creating an even playing field for the entry of gas suppliers. The transportation service offered by Cenagas as the manager of the national Sistrangas pipeline system is programmed in cycles of nomination and confirmation that follow North American Energy Standards Board (NAESB) practices, while information relevant to users is now published frequently in an electronic bulletin board (EBB).

Incentives are in place to attract marketers that allow end users to have different supply options to state oil company PetrÃ³leos Mexicanos (Pemex). This unbundling is focused on providing buyers with the option of contracting directly with Cenagas a maximum daily quantity (MDQ) of gas, which becomes an asset that gives supply certainty and offers flexibility to optimize use through a secondary market.

If you add to this the growth of the gas pipeline system that now spans 15,000 kilometers, with global capacity of almost 15 Bcf/d and coverage that leaves only four of the 32 states of the country without access to natural gas, Mexico has before it an unprecedented opportunity to use natural gas as a lever for growth, development and wellbeing, goals that are also part of the aspirations of the current government of AndrÃ©s Manuel LÃ³pez Obrador. However, as mentioned, these advances are little known.

This invisibility represents an important risk to the country, especially if an effort is not made to highlight the possibilities offered by the legal framework and the splendid conditions present in the market. The determined pursuit of “energy sovereignty” by the current government could actually hinder the design of a solid energy security strategy that diversifies sources of energy supply.

Allowing Pemex and state power company ComisiÃ³n Federal de Electricidad (CFE) to be the main actors in preparing and executing the expansion plans of the gas network, and thus leaving aside private participation in decision-making, can lead to sub-optimal solutions that do not resolve congestion and, worse still, could leave consumers unattended.

Limiting the independence of Cenagas as operator of the Sistrangas can make open access ineffective, inhibit competition and leave state companies as the only agents with the possibility of anchoring new pipelines. Failure to encourage unbundling favors the hoarding of large intermediaries and limits the potential benefit of having access to different production basins in Texas and Mexico.

The first measure to mitigate this risk is through information dissemination among agents and stakeholders. As long as the public knows that it has more options than it had a couple of years ago, it is likely to be interested and involved in not losing those options.

But information must also spread out to the big players in the neighboring market of the United States too. Producers and marketers in Texas must understand that there are already options to get their production to consumers in Mexico, and that the gas supply chain does not necessarily require Pemex as an intermediate step. It is pertinent that gas suppliers, producers and marketers understand that leaving the comfort of the Pemex and CFE monopsonies can lead them to sophisticated customers sensitive to price differences for whom the continuity of service is a priority.

There are three additional points that are crucial to get across for the natural gas market in Mexico to flourish.

The first has to do with energy security. It is important to demonstrate that this idea of dependence on U.S. natural imports as being dangerous is a fallacy. There will be no political circumstance that prevents the continuous flow of gas from the United States to Mexico because cutting off supply represents an economic loss that producers and marketers are not willing to accept. In this regard, producers and marketers that deliver gas from Texas are allies of the Mexican government.

The second has to do with Pemex and CFE. It is important to convey a clear message that Texas’ natural gas supply, private participation in pipeline development and commercial intermediation activities are not a threat to Pemex; they are a source of complementary services and goods. There is nothing reprehensible in the idea of the new government in visualizing Pemex as a public policy tool as long as the rules of coexistence between actors are clear and given certainty. In summary, the industry should send a clear message of collaboration but strongly ask for clarity on rules and policies.

The third point has to do with the principal message of the new Mexican government, which gives it legitimacy within the Mexican population, and that has to do with the fight against poverty and corruption. The gas industry must make an emphatic commitment to the principles of transparency, accountability and fair competition. A coherent message about the free market as a way to defeat opaque practices must be developed, along with the idea that efficiency as a result of competition can contribute significantly to reduce poverty. Finally, an open gas market can promote investment, job creation and the general affordability of the basic energy basket.

Disseminating knowledge on both sides of the border may allow all of us see that we are not a danger to one another but instead a clustering of good coincidences that provide multiple opportunities to everyone involved.