Physical gas for next-day delivery fell hard and fell often and didn’t need any help from the stricken futures market as most traders made a concerted effort to get their deals done ahead of the morning Energy Information Administration (EIA) storage report. 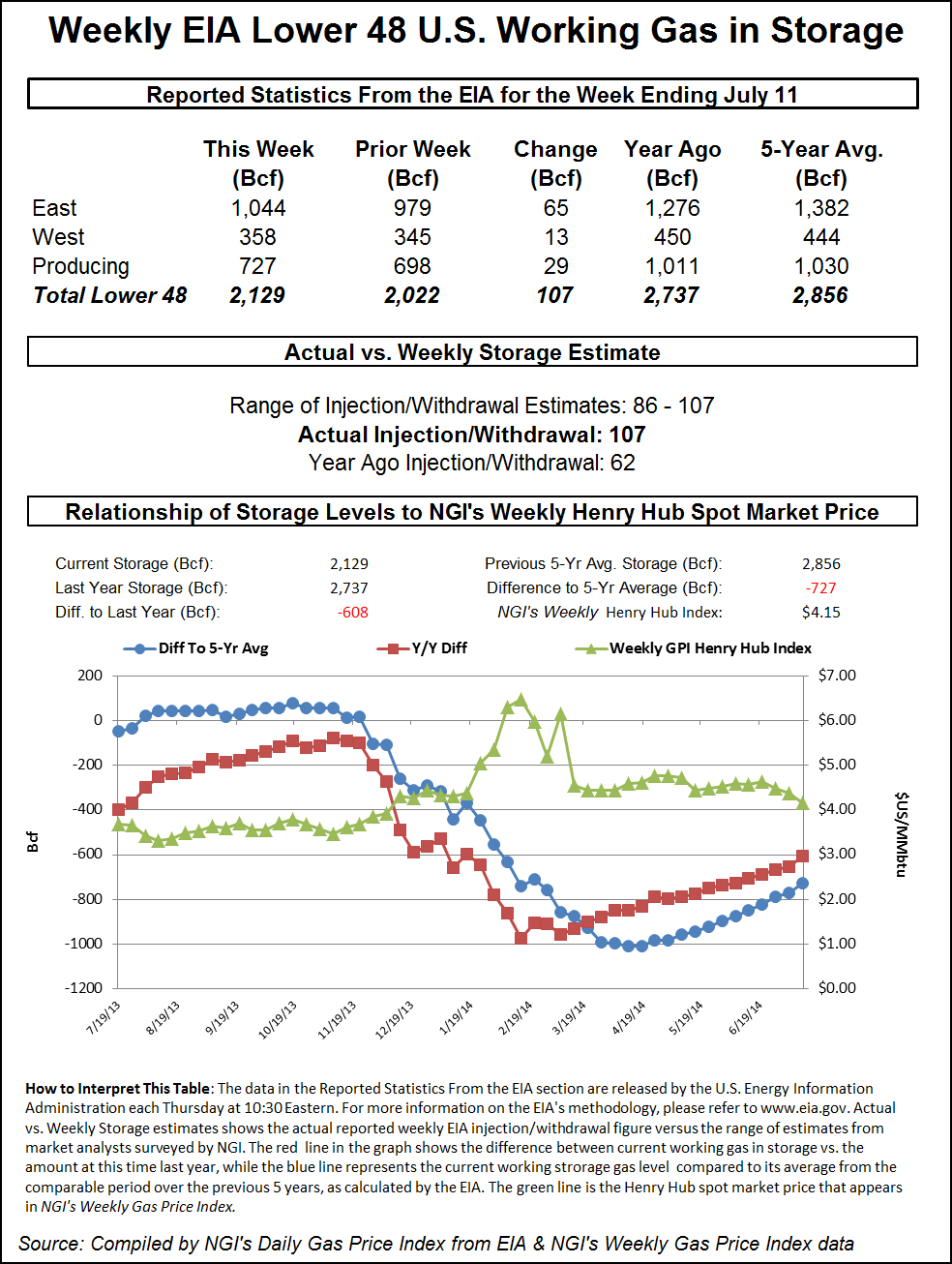 West Coast locations suffered drubbings of as much as a quarter at some points, but not to be outdone, New England, the Mid-Atlantic and Appalachia posted hefty drops of their own. The EIA reported an increase of 107 Bcf in working gas inventories for the week ending July 11, well above expectations, and prices immediately plummeted close to the lows of the day, with futures breaking below the important $4 support level. At the close, August futures settled 16.5 cents lower at $3.954 and September dropped 15.9 cents to $3.957. August crude oil gained $1.99 to $103.19/bbl.

Next-day deliveries on the West Coast took heavy hits as a trio of mild weather, slipping power loads, and lower next-day peak power prices all combined to soften prices. The National Weather Service in San Diego said “fair weather will continue through the weekend…with a deep marine layer and strong onshore flow spreading low clouds inland to the coastal slopes during the nights and mornings. Daytime temperatures will remain near or a little below seasonal averages for most locations. The onshore flow will also bring locally gusty west winds to the mountains and desert slopes during the afternoons and evenings.”

Forecaster Wunderground.com predicted for the most part that next-day highs from northern to southern California would move little from seasonal norms. San Francisco’s Thursday high of 68 was expected to drop to 63 Friday before adding 2 degrees Saturday. The seasonal high in San Francisco is 72. Los Angeles’ 76 degree maximum Thursday was seen dropping to 75 Friday and reaching 77 by Saturday. The normal mid-July high in Los Angeles is 75. San Diego’s high of 75 on Thursday was seen easing to 74 Friday and Saturday, just a touch below the normal high of 75.

Quotes at New England locations suffered a similar fate with temperatures failing to get beyond seasonal norms. Wunderground.com reported that Boston’s high of 81 Thursday was seen sliding to 79 Friday and 77 on Saturday. The normal high in Boston this time of year is 82. Hartford, CT’s Thursday high of 83 was forecast to reach 84 Friday and ease back to 83 Saturday. The normal high in Hartford for mid-July is 87.

Mid-Atlantic and Appalachian locations were not spared the slicing and dicing either. Gas for Friday on Dominion South dropped 19 cents to $2.33, and deliveries to Columbia Gas TCO fell 9 cents to $3.95. Gas bound for New York City on Transco Zone 6 shed 22 cents to $2.49, and parcels on Tetco M-3 fell 21 cents to $2.49.

The reported injection of 107 Bcf caught everyone off guard. “We were looking for a 97 Bcf to 98 Bcf build, so this was a big surprise,” said a New York floor trader. “From here you have to start looking at market support at $3.75. If the market settles below $4, that will also be big.”

“The net injection of 107 Bcf was more than expected, implying a further weakening of the background supply/demand balance, presumably on a further increase in supply. This has bearish implications for the forward data as well,” said Tim Evans of Citi Futures Perspective.

Industry pundits are by and large undecided about what a proper ending inventory is, but last year only 62 Bcf was injected for the week, and the five-year average is for a 65 Bcf increase. This time around a more rapid refill was expected. Analysts at IAF Advisors in Houston calculated a 103 Bcf injection, and at United ICAP they were expecting a 100 Bcf build. A Reuters survey of 26 traders and analysts revealed an average injection of 98 Bcf with a range of 86 Bcf to 107 Bcf.

Inventories now stand at 2,129 Bcf and are 608 Bcf less than last year and 727 Bcf below the 5-year average. In the East Region 65 Bcf was injected and the West Region saw inventories up by 13 Bcf. Inventories in the Producing Region rose by 29 Bcf.

Analysts suggest that if present storage trends continue a season-ending storage inventory above 3.0 Tcf is well within the industry’s grasp. “With 9 weeks of 100+ Bcf injections, the market is steadily eroding the storage deficit and outperforming expectations,” said Phillip T. Golden, director of risk and product management at Energy Market Exchange. “The drop we are seeing now in the market could lead to very attractive buying opportunities for the balance of the month, pending a significant weather event. As of week 15 of the injection season, storage has typically hit 72% of the value for the end of injection season. If this pattern were to hold, storage at the end of the 2014 storage season would be just under 3,000 Bcf. However, given recent injection trends, a number closer to 3,200 Bcf is more realistic.”

“Thanks to persistent mild summer weather, prices have dipped below $4/MMBtu with the possibility of further deterioration as cooling demand begins to ebb,” said Teri Viswanath, director of commodity strategy for natural gas at BNP Paribas. “Yet, while recognizing that the weather this summer has lessened the inventory supply risk next winter, we remain optimistic that supportive fundamentals will shortly re-emerge. Specifically, we anticipate that the combination of increased fuel-switching and the potential for early heating demand will lift gas prices before the end of the season,” she said in a report to clients.

“While we do see the possibility of lower prices ahead, the well-worn expression, “the cure to low gas prices is low gas prices,” will undoubtedly hold true the longer prices remain below $4/MMBtu.”