A thaw from early January’s bone-chilling temperatures had natural gas spot prices retreating across the board for the week. Another round of winter weather forecast to arrive over the long Martin Luther King Jr. holiday weekend couldn’t offset early-week East Coast moderation from record highs, and the NGI Weekly Spot Gas Average dropped $7.10 to average $3.61/MMBtu. 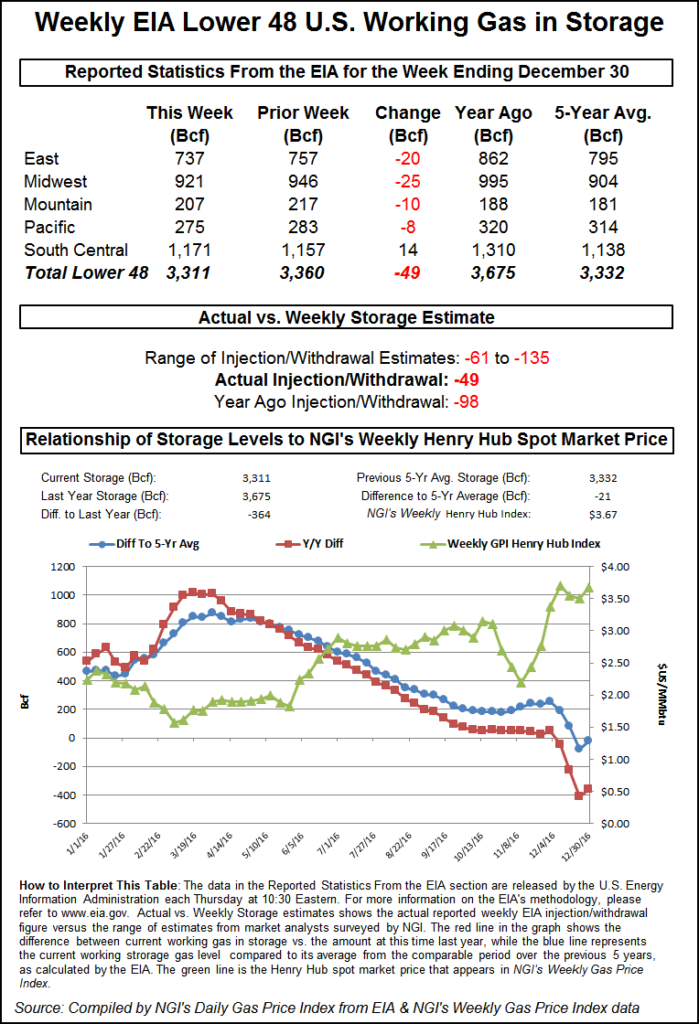 A break in the cold saw temperatures fall to more reasonable levels after pipeline constraints and elevated demand the week before had sparked spot price blowouts in the Northeast. Transco Zone 6 New York, after recording a record-high $175 MMBtu/d Jan. 4, dropped $57.13 for the week to average $6.80. Algonquin Citygate followed suit, dropping $30.84 to $9.63.

It was a similar story away from the East Coast. Price spikes had been less extreme in the Midwest, but a fall-off in demand saw prices at Chicago Citygate tumble $3.19 to average $3.18 for the week. Northern Natural Ventura fell $2.90 to $3.34.

But the big story for the week came in the form of weekly government storage data. It was a record-setting doozy of a number and a clear reminder of just how positively frigid the recent Arctic blast had been.

Coming off the most potent stretch of heating demand since the notorious polar vortex-influenced 2013-2014 winter, consensus estimates before the report had predicted a record withdrawal. But the actual number still surpassed the median estimates by around 25 Bcf.

Following the release of the report Thursday, the February contract surged 17.8 cents to $3.084. The prompt month then traded higher Thursday overnight and carried that momentum through to the close Friday, adding another 11.6 cents to settle at $3.200.

The -359 Bcf figure seemed to have loosened the bears’ grip on the market Friday, according to Societe Generale analyst Breanne Dougherty. After 2018 “got off to a very cold start…the forward market seemingly shrugged it off,” she said. “In the week ended Jan. 5, the prompt-month contract reached only as high as $3.06/MMBtu, and by the end of the week the price was back below the $2.80/MMBtu level.

“It is almost as though the market needed proof that the cold did in fact mean something for fundamentals, and the historic record draw of 359 Bcf reported Thursday apparently was the proof that was needed,” she said.

Prior to Thursday, the largest net storage pull on record from EIA was a 288 Bcf withdrawal reported on Jan. 10, 2014. The 359 Bcf withdrawal in this week’s report is more than double the year-ago and five-year average withdrawals of 151 Bcf and 162 Bcf, respectively.

Coming off the most potent stretch of heating demand since the notorious polar vortex-influenced 2013-2014 winter, consensus estimates before the report had predicted a record withdrawal. But even with such lofty expectations, the actual number still surpassed the median estimates by around 25 Bcf.

A Reuters survey of traders and analysts showed on average a 333 Bcf withdrawal for the week. Responses to the Reuters survey ranged from -285 Bcf to -362 Bcf. A Bloomberg survey showed a median -332 Bcf, with a range of -305 Bcf to -345 Bcf.

The final withdrawal figure came in “an impressive 31 Bcf more than our estimate,” Bespoke Weather Services said shortly after EIA’s report. “The holiday effect was clearly counteracted by soaring cash prices that led storage optimizers to release this record amount of gas.

“The anticipation of this number drove prompt month natural gas prices far higher on the day, and the initial reaction was bullish to a much tighter print compared to last week,” Bespoke said. “Yet we are already seeing early signs of a ‘sell the news’ event, with later contracts along the strip declining significantly off the print…strip weakness advertises caution above $3.02.”

Total working gas in underground storage ended the week at 2,767 Bcf, versus 3,182 Bcf a year ago and five-year average inventories of 3,149 Bcf. The year-on-year storage deficit widened for the period from -192 Bcf to -415 Bcf, while the year-on-five-year deficit increased from -192 Bcf to -382 Bcf, EIA data show.

Genscape Inc., which had called for EIA to report a 352 Bcf withdrawal, said the record “was driven by three things. One, an all-time record cold week by more than 20 gas-weighted heating degree days (HDD). Two, production freeze-offs, which took nearly 3 Bcf/d offline week/week. And three, the impressive growth in residential/commercial (res/com) demand per degree day that we have seen over the last few winters.

“Res/com demand last winter was approximately 1.5 Bcf/d higher” relative to heating degree days (HDD) than in the 2011-2014 timeframe, the firm said. “This has been driven by a number of factors across the country, but in the Northeast it has been driven by a big push to convert homes and businesses from heating oil to natural gas.”

In the midday weather data Friday “colder trends held” for the coming week before a break expected Jan. 19-22, NatGasWeather.com said. But guidance “was impressively colder-trending with a weather system tracking out of the Central U.S. and into the East Jan. 23-25,” which appeared to get a reaction from the market, according to the firm.

“We must expect that any further colder trends over the weekend and prices could continue higher, while if the Jan. 24 system were to trend back milder” and if warmer conditions Jan. 26-28 “were to look to last a little longer, a gap lower could be expected,” NatGasWeather said.

With futures hovering in the $3.20 area after the close Friday, “at this stage technical indicators simply do not matter, as this market will solely be driven by forward weather expectations and observed demand over the coming few weeks,” Bespoke Weather Services said in a note to clients.

“Over the past week we have seen atmospheric indicators, climate guidance and ensemble guidance all align in showing significant warm risks for the final third of January. Such a strong signal” would normally “translate fully into the medium-range” but hadn’t yet as of Friday, leading to uncertainty, Bespoke said.

The major weather models were also showing disagreement, according to the firm.

“Indicators show risk skewed bearish. Raw afternoon model guidance trends show risk skewed bullish,” Bespoke said. “Should we get the warmth that has been telegraphed $2.92 would not be far off, but the confidence is not there yet in this highly volatile weather pattern.”

Roughly one week later, East Coast cash prices were once again elevated on the arrival of another round of wintry temperatures pouring into the Lower 48.

“Weather-related natural gas demand will start its multi-day jaunt higher beginning Friday as the newest, very cold Arctic front plunges southward into the U.S. before transitioning eastward,” PointLogic Energy analyst Alan Lammey told clients Friday. Daytime highs were expected to range from around 10-25 degrees colder than normal across the northern United States in the one- to five-day period, with the cold hitting the East Coast by the weekend.

“Throughout the densely populated I-95 corridor, warmth will linger…However, that will rapidly change as the Arctic air mass that is presently centered over the Plains will expand to the eastern third of the nation by the end of the weekend. Even as early as Saturday, demand will spike as the cold front clears the major metropolitan areas of the East Coast,” Lammey said.

The New England power market could have some additional help with the return to service of the 688 MW Pilgrim nuclear plant in Plymouth, MA, according to Genscape. The plant was shut down Jan. 5 as a fast-moving storm was pummeling the East Coast with blizzard-like conditions.

“In addition to the return of Pilgrim, our liquefied natural gas team noted…that Everett has received three refill cargoes in the last two weeks, helping replenish storage levels drawn down by high sendout during” the recent storm, Genscape said. It cited its “proprietary monitoring of truck-based deliveries into the New England market.”

Consistent with Friday’s spot price action, below-normal temperatures were expected to spur demand increases over the weekend and in the week ahead — but not to levels seen during the record-setting week ending Jan. 5.

Genscape said Friday its supply and demand (S&D) models showed demand cresting “the 100 Bcf/d mark again next week. Genscape meteorologists were forecasting another round of cold weather to descend upon the eastern two-thirds of the country beginning Saturday. By Sunday, Lower 48 population-weighted HDDs were forecast to run about 28% colder than normal through next Thursday.

“Accordingly, our S&D has demand breaching the 100 Bcf/d mark on Sunday and continuing to the week’s forecast high near 107 Bcf/d Wednesday and Thursday,” Genscape said, noting that the extended weekend including the Martin Luther King Jr. holiday could dampen demand.

Cash prices from Texas and the Gulf Coast up through the Midcontinent and the Midwest climbed higher Friday after gaining earlier in the week. Henry Hub jumped 76 cents to $4.00, while further north, Northern Border Ventura surged $1.19 to $4.59.

Genscape said the event was expected to reduce flows through the compressor to 2,230 MMcf/d, down from 2,530 MMcf/d.

“Northern Border experienced a similar force majeure at Glen Ulin from Dec. 31-Jan. 4 that contributed to elevated basis prices at the Northern Border Ventura hub,” according to Genscape. “That event reduced operational capacity to 2,330 MMcf/d. Though nominations were not significantly affected at Ventura, Northern Border’s primary delivery point which connects with Northern Natural, the restrictions did tighten system flexibility at a time when Midwest demand was running in excess of 20 Bcf/d,” or about 28% above the prior 14-day average.

PointLogic analyst Luke Larsen said in a note to clients Friday that in preparation for the latest round of Arctic temperatures several other pipelines across the region were “evaluating system conditions and notifying shippers and customers accordingly.”

Ahead of the cold, Columbia Gas (TCO) was taking steps Friday to manage storage and transport on its system. TCO notified shippers of storage critical days effective Sunday through Tuesday, with penalties enforced for withdraws exceeding contracted volumes. The pipeline operator also declared transport critical days for the same period across multiple operating and market areas on its system, including similar penalties for shippers taking gas above contracted volumes.