The United States now holds more recoverable oil reserves than Saudi Arabia and Russia, thanks to the unconventional revolution, according to a three-year global review by Rystad Energy. 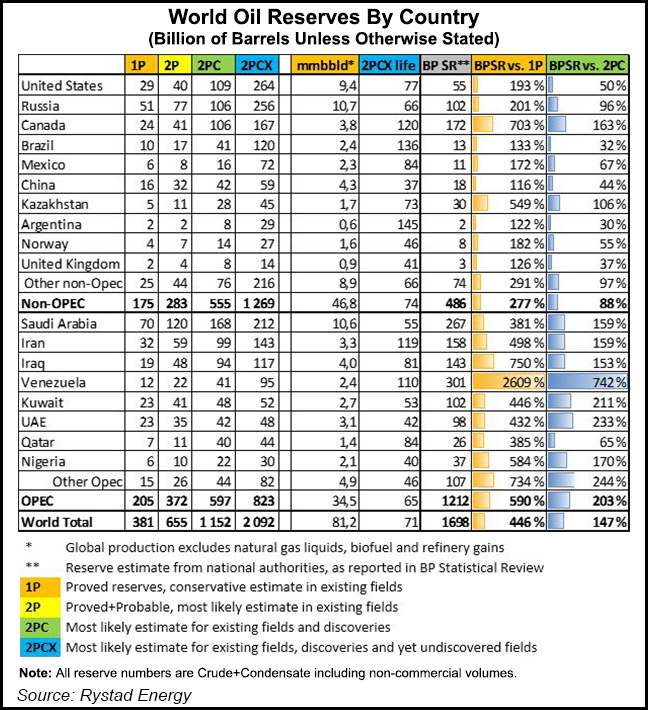 “An established standard approach for estimating reserves is applied to all fields in all countries, so reserves can be compared apple-to-apple across the world,” said Rystad’s Per Magnus Nysveen, head of analysis, told NGI’s Shale Daily.

“There is little potential for future surprises in many other countries, but in the U.S. there is,” he said, pointing to prolific discoveries being unearthed in the Permian Basin and the Midcontinent. “Three years ago the U.S. was behind Russia, Canada and Saudi Arabia.”

Rystad’s data collection, Nysveen said, is done differently than other providers, including BP plc’s Statistical Review of World Energy, which many consider the gold standard. Some countries, such as Venezuela, “apparently” include still-to-be-discovered oil in their recoverable reserves figures, while others such as China and Brazil “officially report conservative estimates and only for existing fields.”

Venezuela, a member of the Organization of the Petroleum Exporting Countries (OPEC), only has 95 billion bbl of recoverable reserves under Rystad’s review, versus the country’s official estimate of 301 billion bbl.

Rystad reviewed 60,000 fields worldwide over a three-year period. It concluded that total global oil reserves are 2.1 trillion bbl, 70 times the current production rate of about 30 billion bbl/year. For comparison, cumulatively produced oil up to 2015 amounted to 1.3 trillion bbl.

Based on current global crude and condensate production of 81.2 million b/d, the world’s oil reserves would last for close to 72 years, Rystad estimated.

The data, said Nysveen, “confirms that there is a relatively limited amount of recoverable oil left on the planet. With the global car-park possibly doubling from 1 billion to 2 billion cars over the next 30 years, it becomes very clear that oil alone cannot satisfy the growing need for individual transport.”