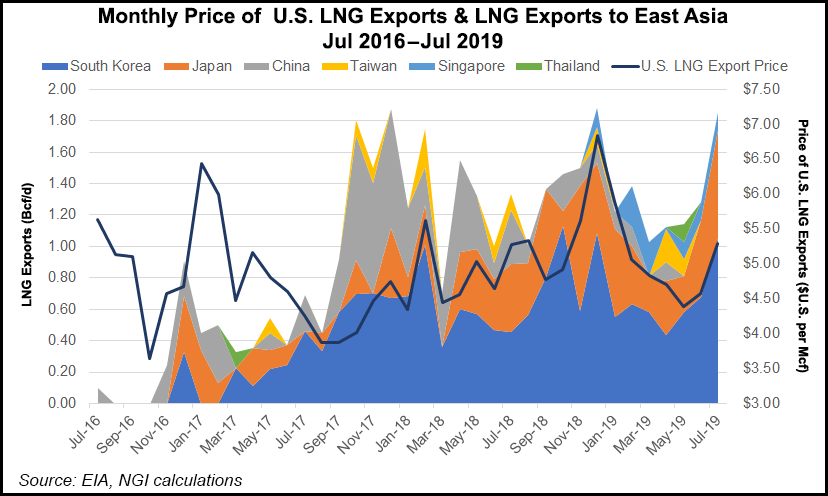 He said the government would support PTT’s gas business at the regional level and the country’s Energy Regulatory Commission (ERC) would ease related regulations for LNG import and re-export.

“PTT is capable of becoming a regional [LNG] trader because the company is heavily invested in gas infrastructure and human resources,” Sontirat said.

“The company is studying the feasibility of the LNG trading business, expecting to reach a conclusion in a couple of months. The business plan will be proposed to the National Energy Policy Council in December.”

PTT also unveiled a plan last month to provide small-scale LNG distribution to marine vessels and heavy-duty trucks in the region, development of a gas pipeline and feeding LNG to a power generation system.

PTT also has two innovative projects for LNG distribution selected to join the ERC plan for testing before commercial adoption.

The International Gas Union defines small-scale LNG (SSLNG) as any facility with a liquefaction and regasification capacity of 0.05â€“1.0 million metric tons/year (mmty) and vessels with a capacity of 60,000 cubic meters or less.

Sontirat’s statements come less than two weeks after The Industrial Estate Authority of Thailand said it had signed an agreement worth $1.33 billion with Gulf MPT LNG Terminal Co. to build the country’s third LNG import terminal.

PTT operates the country’s only LNG import facility, the Map Ta Phut LNG project, southeast Asia’s first LNG import terminal. It has a regasification capacity of 11.5 mmty. The company is also increasing loading facilities at the project. The company also constructing the new Nong Fab LNG import terminal in Rayong. The terminal is expected to have a regasification capacity of 7.5 mmty and become operational by 2022.

With a total capacity of 19 mmty by 2022, and around 24 mmty with the completion of the first phase of its third LNG facility, Thailand could capture considerable LNG market share as both a reseller and provider of the fuel in southeast Asia, particularly as neighboring southeast Asian tiger economies, including Vietnam, the Philippines, Bangladesh and possibly Cambodia, will bring LNG import facilities onstream within the next few years and will be looking for shorter term, flexible supply deals. These countries are also proposing small to mid-sized LNG to power facilities that would also help PTT develop its LNG trading business model.

Because many smaller outlying islands in the Asia-Pacific region, including hundreds of stranded islands in archipelago countries like the Philippines and Indonesia, as well as islands offshore Myanmar, are still using aging oil-fired power plants to supply electricity, Thailand’s push for LNG distribution to neighboring countries could help the region transition to more efficient and cleaner gas-fired power usage, in addition to providing more demand for large LNG producers that could still be struggling with a supply overhang of the fuel up to the mid-part of the next decade.

LNG is also increasingly replacing high sulfur fuel oil for marine vessels which would also help reduce greenhouse gas emissions. Southeast Asia could also follow the lead of the United States and China by using LNG as a fuel for the long-haul trucking sector.

There are several advantages of using SSLNG, including quicker buildout time, being less capex intensive, and providing more flexibility on logistics and transportation.

The increase of SSLNG development could also benefit from the recent drop in spot prices for LNG in Asia, which are at multi-year lows amid warmer temperatures in North Asia (home to around two-thirds of global LNG demand) and more supply hitting the market, particularly from the United States. The ongoing supply overhang is projected to last until at least 2022 with some analysts forecasting the glut to persist even longer. As long as LNG prices remain competitive or even below oil price equivalency, this price differential will help boost interest in SSLNG.

However, SSLNG is not without unique headwinds, such as supply chain optimization, training large numbers of people skilled in handling LNG, and trying to accurately predict future demand in remote areas, according to the Asian Pacific Energy Cooperation. The complexity of its value chain also makes its cost per unit more expensive. Also, the different nature of SSLNG supply chain as compared to the traditional large scale LNG supply chain suggests that new business models are needed for players in the SSLNG market, Enerdata said in a report.

SSLNG is projected to grow globally across various sectors. French energy giant Engie forecasts that global demand for SSLNG by 2030 will steadily increase, including 24 mmty in the power sector, 57 mmty in the marine fuel sector and around 85 mmty in the LNG trucking sector.