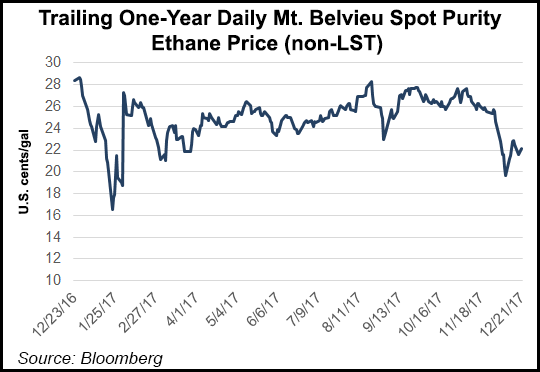 In a brief update posted on the project website on Thursday, the company said it would have a “significant update that will demonstrate momentum for this project early in 2018.” About two years ago, PTTGC committed $100 million for preliminary design work on the facility, initially saying it would have an FID by 2016 or early 2017. But in February, the company said it needed more time to review the early plans drawn up by two engineering firms, and it pushed the FID back to late 2017.

As the year draws to a close, Thursday’s announcement was not entirely unexpected, as local and state officials, as well as those in the industry, have speculated in recent weeks that an FID was more likely to be made sometime next year. In an interview earlier this week, Ohio Oil and Gas Association (OOGA) spokesman Mike Chadsey said the organization was hearing early 2018 as the next possibility for an announcement.

OOGA, he said, is keeping a close eye on the cracker project, and said Hurricane Harvey, which pounded the Gulf Coast over the summer, could be factoring into PTTGC’s decision because there’s a possibility that components for the facility that would likely be manufactured in the Gulf could be delayed.

But PTTGC spokesman Dan Williamson said Friday that is not a factor. He added labor is not a concern either, nor are commodity prices. It’s simply a “big, complicated project,” he said, adding that “it’s just taking a long time” for the company to reach a decision.

Feedstock prices have indeed declined over the last year. Ethane prices have trended downward, finishing at about 22 cents/gallon on Thursday. They were about 28 cents/gallon at this time last year, according to Bloomberg data, but natural gas has been pressured to break out in that time, keeping ethane down as well.

Professor Edward Hill, who teaches economic development and public policy at Ohio State University, wasn’t surprised about the delay either. “It is easier and faster to get to ”no’ on a project of this size and complexity than it is to get to ”yes,’” said Hill, who tracks the region’s oil and natural gas development and its effects on the economy. “Also, the amount of capital required is so large, and the market risk stretches so far in the future, that the investor needs certainty on as much of the project as they can to box in their risk.”

PTTGC, the petrochemical and refining subsidiary of Thailand’s state-owned oil and gas company, PTT pcl, reiterated in its November earnings release that the “investment consideration process” continues. It has previously said that the phase is crucial to the project’s success.

Matthew Englehart, a spokesman for the state’s private economic development organization, JobsOhio, which has worked closely with the company, said PTTGC continues to “collaborate with JobsOhio and local partners while investing time and resources to move this project forward.”

PTTGC has already signed purchase option agreements for part of the 500-acre site it plans to build on. It has also secured commercial arrangements with producers for feedstock as well as those for utility supplies, product marketing and logistics. The company has also received permits related to site preparation.

The facility is being designed to produce 1 million metric tons per year of ethylene, a key building block for plastics. It would have the capability to consume about 65,000 b/d of ethane.

Shell Chemical Appalachia LLC recently entered the primary construction phase for its 100,000 b/d ethane cracker in western Pennsylvania. It took about five years for Shell to reach an FID for that facility after indicating its interest in the region in 2011 and then announcing that it would move forward with the project in June 2016. Shell’s facility is expected to enter service sometime in the early 2020s.