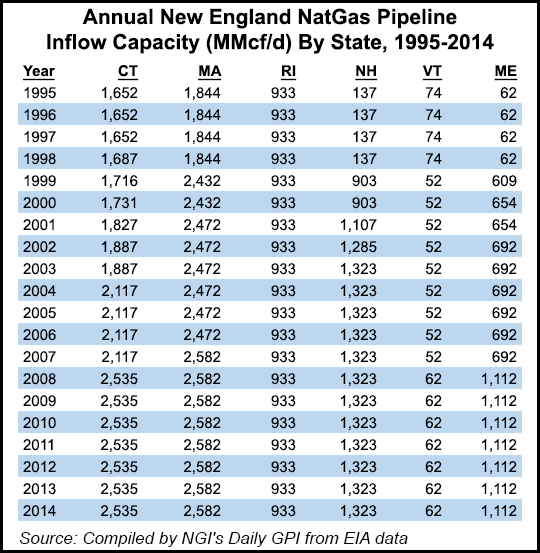 “In the absence of a comprehensive agreement among New England states, it is in Massachusetts’ interest also to pursue, on an independent and parallel track, unilateral efforts to underpin incremental pipeline capacity into the region for the benefit of Massachusetts’ energy consumers,” TGP said in a filingwith the state’s Department of Public Utilities (PUC).

Massachusetts could “achieve benefits for its energy consumers by contracting for additional pipeline capacity, regardless of the actions of the other New England states,” TGP said.

Earlier this month, TGP told New Hampshire’s PUC that the Granite State should go it alone to secure pipeline capacity to feed power generators and combat high costs for heat and electricity, rather than wait for other New England states to act in concert (see Daily GPI, June 4a).

In both cases, the Kinder Morgan Inc. pipeline promoted its Northeast Energy Direct (NED) project as a cure for chronically high natural gas and power prices in New England states, which are essentially in the backyard of the booming Marcellus Shale gas patch. “Massachusetts should prioritize commitments to pipeline project(s) that offer: scale, the direction connection to incremental domestic gas supply, direct service to substantial natural gas-fired generation, and the ability to serve other regional pipelines with low cost natural gas,” TGP said in its Massachusetts filing. “Tennessee’s NED Project satisfies these criteria, and will help maximize the benefits to Massachusetts citizens in the form of lower energy costs.”

Massachusetts, which would receive gas supplies via NED, has questioned whether the project is even needed and has raised concerns about its environmental impact (see Daily GPI, Sept. 18, 2014).

The state does need more pipeline capacity, at least according to a recent study. An analysis of eight different scenarios indicated that through 2019 “electric generators have insufficient supply of natural gas, which results in spiking natural gas prices,” according to the report(see Daily GPI, Jan. 12).

Simultaneous to its New Hampshire filing, TGP downsized NED, striking from the project two pipeline laterals as well as previously planned modifications at three meter stations (see Daily GPI, June 4b). The project was announced last year with a planned capacity scalable from about 800,000 Dth/d to 1.2 Bcf/d, or ultimately up to 2.2 Bcf/d, depending upon final customer commitments (see Daily GPI, July 30, 2014).