Natural gas futures rallied decisively for a second straight session Wednesday, putting bears on the run as the market begins to look ahead to winter. After picking up more than 7 cents a day earlier, the October Nymex futures contract surged another 8.7 cents to settle at $2.445/MMBtu. November added 9.5 cents to settle at $2.492. 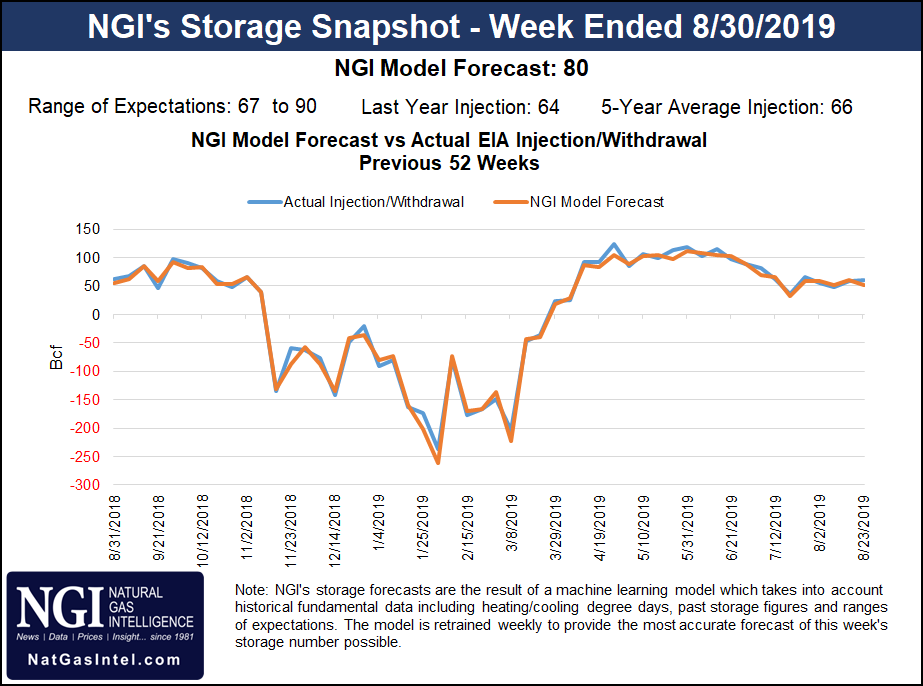 As a group, speculators have held a large net short position that is not quite a record but “pretty close to it,” according to INTL FCStone Financial Inc. Senior Vice President Tom Saal, who regularly breaks down Commitment of Traders data for clients. This week’s rally is “textbook short covering,” he said.

“Nobody should be surprised. I’ve been telling everybody for a long time,” Saal told NGI. Speculators “have been short, and there’s only one way to take a profit when you’re short, and that’s to buy it.”

“We’re trading October now. We’re no longer in summer,” Saal said. Speculators may not want to be “too short going into the winter, so now they’re buying their contracts back, and I don’t think they’re done.”

Along with recent hotter trends in the forecast, record-level liquefied natural gas (LNG) exports and a limited demand impact from Hurricane Dorian have contributed to this week’s rally, according to NatGasWeather.

“Dorian will still bring heavy rain and cooling to the Carolina coast the next couple days, including power outages, although impacts overall will be relatively minor for a storm that was once a catastrophic Category 5,” the forecaster said.

As for the latest Global Forecast System (GFS) run Wednesday, the data “lost a little demand for late this weekend but added demand for mid-September. Even with these changes, the GFS remains just hot enough into early next week but then not hot enough after.”

NatGasWeather still sees balances as loose, with the upcoming pattern likely to keep weekly storage injections at above- or near-normal levels over the next few weeks.

“The current rally has been impressive, likely aided by an imbalance of too many bears versus bulls causing a short squeeze,” NatGasWeather said. “But now that prices have reached $2.40, they could be getting expensive based on what remains a rather loose supply/demand balance,” making Thursday’s weekly Energy Information Administration (EIA) storage report “of considerable interest.”

Estimates as of Wednesday showed the market expecting EIA to report a build in the upper 70s to low 80s Bcf for the week ended Aug. 30. A Bloomberg survey on Wednesday showed a median 78 Bcf prediction, based on 10 estimates ranging from 73 Bcf to 90 Bcf. A Reuters survey also pointed to a 78 Bcf injection, with responses ranging from 67 Bcf to 90 Bcf.

Last year, EIA recorded a 64 Bcf injection for the period, and the five-year average is a build of 66 Bcf.

Energy Aspects issued a preliminary estimate for an 84 Bcf injection for this week’s report.

“Our estimate for power burn has been static at a 5.1 Bcf/d week/week drop, given consistent forecasts calling for a 30% week/week drop in population-weighted” cooling degree days for the report period, Energy Aspects said in a recent note to clients. “We currently are forecasting flat production week/week in the week ending Aug. 30. There is some risk to this estimate though, given late-month production numbers are often prone to revision.”

LNG’s impact on the North American supply/demand balance is growing, and the marketplace is evolving to reflect this. Starting next month, LNG buyers will be able to purchase physical volumes through a new LNG futures contract offered by CME Group, the company announced Wednesday.

The U.S. LNG Export futures contract is to be available for trading on Oct. 14, pending regulatory review. Participants would take delivery at Cheniere Energy Inc.’s Sabine Pass LNG facility in Louisiana, while Freeport’s LNG terminal on the upper Texas coast and others are to be included in future delivery months.

Feed gas deliveries to U.S. LNG terminals have consistently totaled above 6 million Dth/d over the past two weeks, hovering above that mark every day since Aug. 23, according to NGI’s daily U.S. LNG Export Tracker.

“The overall theme into the weekend is comfortable conditions across the Midwest to Northeast with highs of upper 60s to 80s for relatively light demand,” NatGasWeather said. “However, it will be hot across the western and southern U.S. with highs of upper 80s to 100s, hottest over California and the Southwest for strong demand. Overall, national demand will be decent this week but not exceptional.”

Heat in Southern California and further upstream in the Desert Southwest, coinciding with maintenance-related import restrictions, should continue to put upward pressure on SoCal Citygate prices this week, according to Genscape Inc. analyst Joe Bernardi.

“The two Topock points have gone to zero operating capacity, a 400 MMcf/d reduction, while the rest of the area zone has been reduced by 70 MMcf/d,” Bernardi said. “This has left only the interconnect with Transwestern at Needles with the ability to bring any gas onto SoCalGas in this area zone.

“…With its tenuous import capacity cut further by this maintenance, SoCalGas will likely resort to increased storage withdrawals to meet higher system-wide demand and could even execute more withdrawals from Aliso Canyon depending on system balancing dynamics. SoCalGas withdrew from that storage field last week, the first time this had been done under the new, less-restrictive Aliso Canyon Withdrawal Protocol that went into effect earlier this summer.”

Elsewhere, forecasts calling for temperatures to cool off over the next several days along the populated Interstate 95 corridor coincided with easing prices in the Northeast. Maxar’s Weather Desk called for temperatures in Boston and New York City to fall from highs in the mid-80s Wednesday to the mid- to low 70s Thursday and Friday.

According to Genscape, over the Labor Day holiday weekend, Texas Eastern Transmission (Tetco) returned more capacity through its Lines 10 and 25 in Lincoln County, KY, continuing restoration efforts in the aftermath of an explosion last month on its Line 15 in the same area.

“Operational capacity was restored to 1,359 MMcf/d, or 70% of total capacity” available prior to the Aug. 1 explosion, Genscape analyst Anthony Ferrara said. “Additional capacity was also returned to Berne, Tompkinsville and Barton…The full return to service date is currently still unknown.”