Texas operators are turning their attention to old business — completing previously drilled wells — rather than drilling new ones, according to Railroad Commission of Texas (RRC) data. 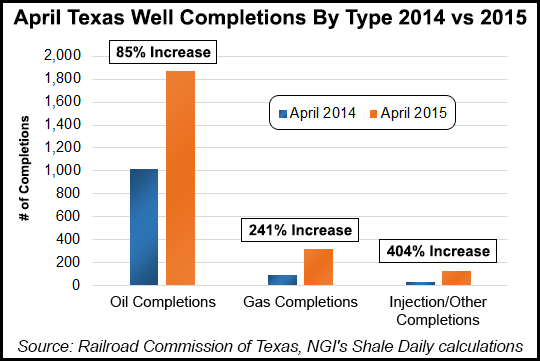 Operators completed more wells in April than they did one year ago; however, total completions are still behind where they were at this time last year. Meanwhile, permitting for new wells is way down compared to a year ago.

According to RRC data released one month ago, in March operators had turned their attention to completing natural gas wells while completing fewer oil wells compared with March 2014 (see Shale Daily, April 28).

In April RRC issued 848 original drilling permits, fewer than half the 1,919 issued in April 2014. The latest tally includes 721 permits to drill new oil and gas wells, nine to re-enter existing well bores and 118 for recompletions. There were 218 oil permits issued, 51 gas, 530 oil and gas, 40 injection, zero service and nine “other” permits.

The average Texas rig count as of May 22 was 372, representing about 44% of all active land rigs in the United States, according to Baker Hughes Inc. data cited by RRC. Before the oil price collapse, Texas had about half of the country’s operating rigs. Since then, both the Permian Basin and Eagle Ford Shale have seen sharp weekly declines in activity, but that appears to be at or near a plateau (see Shale Daily, May 22).

RRC said that in the last 12 months, total Texas reported production was 939 million bbl of oil and 8.3 Tcf of natural gas.