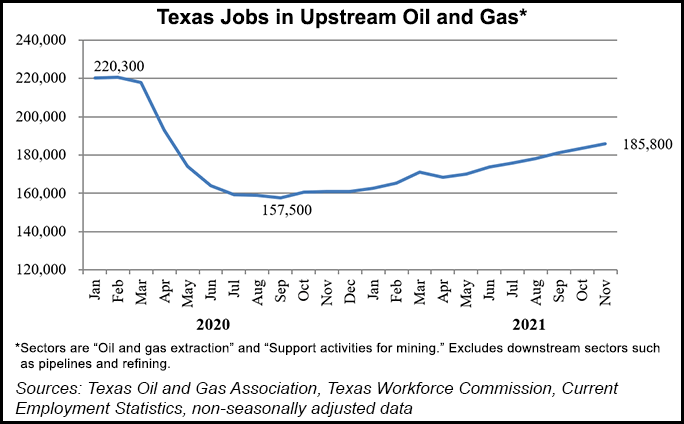 The Texas Oil and Gas Association (TXOGA) observed the Lone Star State has picked up an average of 2,633 oil and gas jobs six months in a row.

“The Texas economy continues to rebound and the upstream sector’s addition of 2,000-plus jobs every month for the past six months is a prime example of how critical this industry is to the state’s recovery,” said TXOGA President Todd Staples. “These jobs pay among the highest wages in Texas, and the activity of this industry supports communities across the state, whether you live in the oil patch or not.”

According to TIPRO, strong upstream, midstream and downstream job posting data for November align with overall rising employment – and ongoing demand for talent – in Texas’ oil and gas industry. The association said its latest workforce analysis shows 65,914 total job postings for the state’s oil and gas industry in November. It added that 9,613 of those postings were unique, marking a 100-job increase in unique postings month/month

TIPRO said the above figures show a posting intensity of 7-to-1, or one unique job posting for every seven postings. It noted the ratio approaches the 6-to-1 posting intensity for all other occupations and companies in the region and shows that employers “are putting average effort toward hiring for these positions.”

Based on statewide employment across 14 specific oil and gas industry sectors, TIPRO said that support activities for oil and gas operations claimed 2,183 unique job postings in November – more than any other sector. With 1,612 unique postings, crude petroleum extraction came in second, followed by petroleum refineries with 1,246 postings, the association noted.

TIPRO also has estimated the direct, indirect and induced economic impacts of various upstream positions. It calculated a 6.8% multiplier effect per job for crude petroleum extraction — the highest impact from its analysis. The trade group also arrived at a 5.2% impact for natural gas extraction, 2.4% for drilling oil and gas wells and 2% for support activities for oil and gas operations.

Longanecker also offered his expectations for Texas oil and gas in 2022.

“Despite concerns over the latest Omicron variant and any related restrictions to economic activity, underinvestment in the oil and gas sector, along with growing demand for our product projected for next year, will likely lead to tighter supplies and higher prices,” he said. “A more restrictive regulatory environment for the U.S. oil and natural gas industry would further exacerbate both and add to inflationary pressures.”