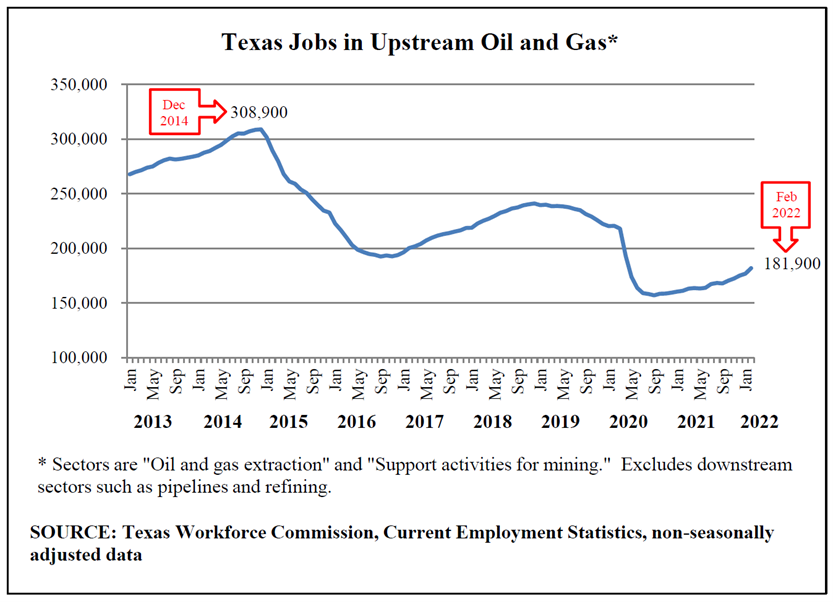 February’s month/month upstream job growth is more than four times that of the 1,200 jobs Texas added from December to January. The Texas Oil and Gas Association (TXOGA) called the monthly gain “the highest spike in over a decade and the second highest jump in at least 32 years,” trailing only the 5,600-job gain in June 2011.

“News of this historic job growth in Texas’ upstream sector is encouraging for all Americans, because Texas continues to lead the way in meeting our energy needs, fortifying our national security, and assuring continued environmental progress,” said TXOGA’s Todd Staples, president.

Based on its classification of Texas’ oil and gas industry across 14 specific sectors, TIPRO said support activities ranked highest in February with 2,712 unique job postings. Crude petroleum extraction, with 1,239 listings, and petroleum refineries, with 905, claimed the second and third spots, respectively.

With 3,319 postings, Houston ranked highest among Texas cities for unique oil and gas job listings in February. Next in line were the Permian Basin hubs Midland (1,048) and neighboring Odessa (541).

For February, TIPRO noted that Baker Hughes Co., with 524 listings, was the top company based on oil and gas job postings in Texas. National Oilwell Varco, Inc. (450) and Halliburton Co. (422) were second and third, respectively.

“Though the U.S. energy sector is not immune to supply chain challenges and workforce shortages presented by both Covid-19 and the unfolding conflict in Eastern Europe, Texas oil and natural gas operators stand ready to supply growing energy demand here and around the world,” said Longanecker.

In addition to “taking immediate action” on all U.S. liquefied natural gas export facility and gas pipeline applications, promoting domestic output would require “ending the moratorium on new leases on federal lands and putting a stop to the political rhetoric against our industry, including the inaccurate and irresponsible notion that the oil and natural gas sector is taking advantage of the global energy crisis to increase profits,” said Longanecker.

Texas’ upstream workforce has added 24,900 jobs overall since hitting a low point in September 2020 and has expanded 15 of the past 17 months, said TXOGA.

Overall, Texas added 77,800 nonagricultural jobs in February and saw its unemployment rate drop one percentage point month/month to 4.7%, according to the Texas Workforce Commission (TWC). The latest TWC data show 13,184,100 jobs in the state – a year/year gain of 832,200 positions from February 2021.