The direct upstream job count in the Lone Star State surpassed the 200,000 mark in August for the first time since the pandemic-related freefall in employment in 2020, the Texas Independent Producers and Royalty Owners Association (TIPRO) reported last week. 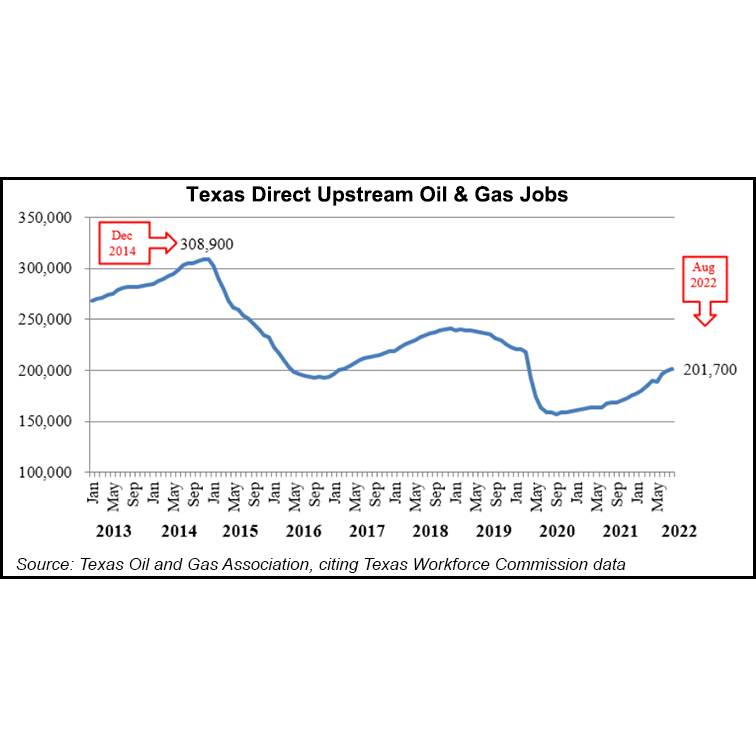 Based on the trade group’s analysis of U.S. Bureau of Labor Statistics (BLS) data, Texas upstream gained 2,600 jobs from July to August to hit a 201,700 direct employment figure.

“The continual growth in the Texas oil and natural gas industry, and its critical role in strengthening energy security for our country and allies abroad, is truly extraordinary,” said TIPRO CEO Ed Longanecker.

The 201,700 figure for August represented a 33,400 year/year gain in direct upstream employment, according to TIPRO. The trade group noted that 25,000 of the additional jobs were in oilfield services (OFS), with the remaining 8,200 in oil and gas extraction.

The Railroad Commission of Texas earlier this month reported state-issued drilling permits were up 26% year/year in August, with even higher annual growth rates for the gassy Haynesville Shale and oil-rich Permian Basin.

The most recent Baker Hughes Co. (BKR) rig count showed a 51% year/year increase in Haynesville drilling units and a 32% increase in the Permian.

Since bottoming out in September 2020, the state’s direct upstream workforce has grown by 44,700 jobs, noted the Texas Oil and Gas Association (TXOGA). Prior to August, the upstream direct jobs tally was last north of the 200,000 threshold in March 2020, according to TXOGA.

Across the state’s oil and gas value chain, TIPRO observed a total of 11,909 active unique job postings for August. Analysts said that 3,906 of those listings were added in the month.

TIPRO, which delineates the Texas oil and gas industry across 14 unique sectors, said support activities for oil and gas operations showed the most unique job listings in August with 3,115 postings. The crude petroleum extraction (1,486 listings) and petroleum refiners categories commanded the second and third positions, respectively.

TIPRO said the top three categories indicate “a continued emphasis on increasing exploration and production activities in the state.”

The most August job listings were in Houston, the state’s leading oil and gas hub, with 4,344 postings. Taking the next two slots were the neighboring Permian cities Midland (1,225) and Odessa (549).

The Lone Star State added a total of 16,400 nonfarm jobs in August, bringing total nonfarm employment to 13,530,100, according to the Texas Workforce Commission (TWC).

“Private industry jobs are up more than 6% from this time last year, and Texas employers continue to expand their workforces,” said TWC Chairman Bryan Daniel.