Routed by Covid-19, the Texas upstream oil and gas sector has lost more jobs this year than originally reported, according to a top industry group. 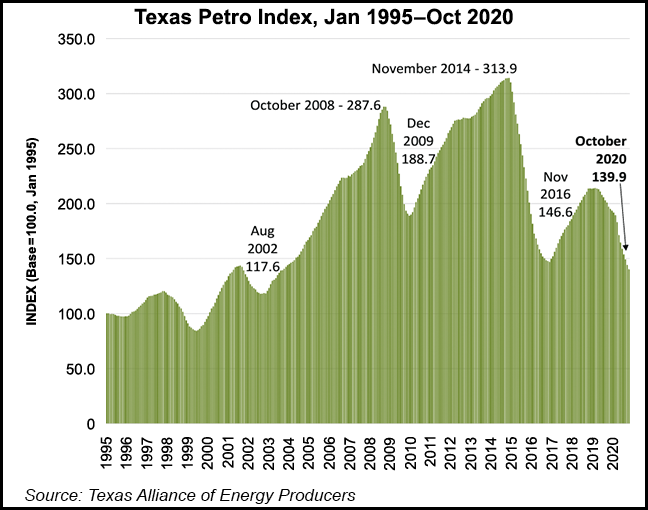 Using internal data and information provided by the Federal Reserve Bank of Dallas, aka Dallas Fed, workforce reductions in the state over the past year are steeper than first estimates, said the Texas Alliance of Energy Producers (TAEP).

“The headline industry employment data, which is only updated and revised once a year, indicates the loss of nearly 70,000 jobs from December 2018 through August 2020,” TAEP noted. “However, new data from the Dallas Fed and the Alliance suggests the employment loss is much deeper, with more than 80,000 jobs lost during the same period. In addition, nearly 60,000 jobs were lost from February to August of this year, rather than the 50,000 previously reported.”

TAEP, which serves more than 3,000 members, compiles a monthly Texas Petro Index (TPI) using industry employment estimates from the Dallas Fed. The data is seasonally adjusted and “early benchmarked” to enhance its ongoing accuracy. The estimates also are adjusted to remove “mining jobs” unrelated to oil and gas.

Blame the ongoing unprecedented pandemic for most of the staffing downturn, said TAEP petroleum economist Karr Ingham, who created the TPI.

“The revised employment estimates clearly suggest that Covid-19 has cut into the upstream oil and gas sector to a deeper extent than previously thought, and those numbers were bad enough to begin with,” he said.

“More than 35% of all upstream jobs were lost in a 20-month period from December 2018 to August 2020. Most of that occurred in 2020, with the industry shedding nearly 30% of upstream oil and gas jobs just between February and August of this year.”

The downward revisions were nearly all in oil and gas “support activities,” which include oilfield service (OFS) and drilling jobs. Oil and gas extraction (operating and producing) jobs mostly were unaffected by the recent revisions.

In a smattering of positive news, August for now appears to be the “trough in the current job loss,” as about 1,500 people since then had been added back to the payrolls through October.

“It will be a long climb back, and indeed, time will tell whether or not the industry will ever return to the pre-downturn levels reached in late 2018,” Ingham said.

The state’s October total upstream employment estimate was down by nearly 78,600 jobs, falling for the 20th straight month. That compares to the December 2018 cyclical peak of 228,500. Upstream employment consists of “oil and gas extraction” (operating and producing) jobs, OFS and drilling jobs.

The monthly estimates are also used in calculating the TPI, which was revised downward based on the revisions in employment data. The TPI fell to 139.9 for October from a revised 144.0 in September, and was off by nearly 29% from the October 2019 TPI of 196.8.

“Through October, the index has lost nearly 35% of its value since its recent peak of 213.8 achieved in February 2019,” according to TAEP. Since February alone, the TPI is down 26%.

The TPI table of monthly upstream indicators continued to reflect “deep year/year declines in most components of the index.” However, most data have improved from the Covid-19 low points earlier in the year, including oil prices, the rig count, and for now, industry employment.

“A turnaround is coming in the Texas Petro Index as various measures of oilfield activity continue to improve,” said Ingham. “Crude oil prices have continued to register improvement sufficient to grow the statewide rig count from record low levels, and other upstream indicators will follow suit.”

According to TAEP, 5,427 original drilling permits were issued by the Railroad Commission of Texas in the first 10 months of the year, off by more than 45% year/year.