Upstream oil and natural gas employment in Texas expanded in August, with monthly jobs gains since last September —  the low point — outnumbering declines, according to a top energy industry group. 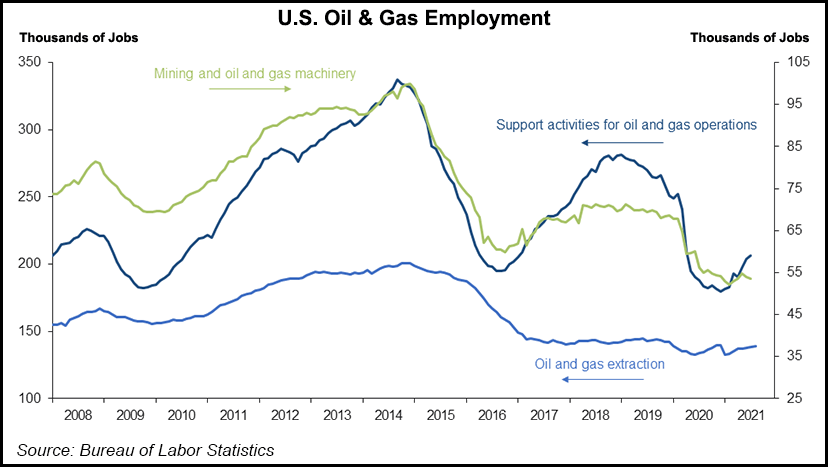 “Since the low point in employment in September 2020, months with job gains have outnumbered decline months nine to two,” TXOGA noted. In addition, July’s estimated upstream gains were revised higher by TWC to 2,100 jobs from an initial estimate of 1,500.

“Oil and natural gas jobs pay among the highest wages in Texas so job growth in this sector not only bolsters our economy and energy security, but also has a tremendous, positive impact for thousands of Texas families,” said TXOGA President Todd Staples.

“Every direct oil and natural gas job in Texas generates an additional three jobs elsewhere in the state’s economy,” he said, citing an analysis by TXOGA and the American Petroleum Institute.

The Federal Reserve Bank of Dallas in a note this week said the combined number of jobs in U.S. oil and gas extraction, which is mostly exploration and production (E&P) companies and oilfield services (OFS), had risen by 16,400 over the four months ending in July.

“This was driven by support activities industries that are responsible for operating drilling rigs, hydraulic fracturing equipment and logistical services,” said economists at the Dallas Fed, as it is known.

However, a preliminary estimate of revisions to national payroll data for March, to be finalized in February, “indicates that payrolls in the mining and logging sector were overestimated by 12%, or 63,000 jobs,” economists said, citing Bureau of Labor Statistics (BLS) data.

“This would change the estimated decline in oil and gas payrolls in the February 2020 to March 2021 period from the initial estimate of 61,000 jobs to as much as 124,000, depending on how the losses are allocated across oil and gas, logging, coal and other mineral extraction industries.”

BLS data indicates that extraction activities, including E&P, and OFS activities, “accounted for over half of U.S. mining and logging jobs in 2020,” economists said.

Meanwhile, mining jobs, along with oil and gas machinery manufacturing jobs, have ticked up “modestly” this year, according to the Dallas Fed.

However, there could be “significant revisions” in 2022.

“Beset by an overabundance of idle equipment, new orders for drilling rigs,  remanufacturing of equipment and other oilfield machinery have been limited,” said economists.

There is an exception, however. Purchases are climbing for energy-efficient and “emissions-reducing purchases, such as hydraulic fracturing equipment that is powered by electricity from the grid.”