With activity climbing in Texas, the U.S. rig count surged nine units higher to 767 for the week ended Friday (July 29), according to the latest tally from oilfield services provider Baker Hughes Co. (BKR). 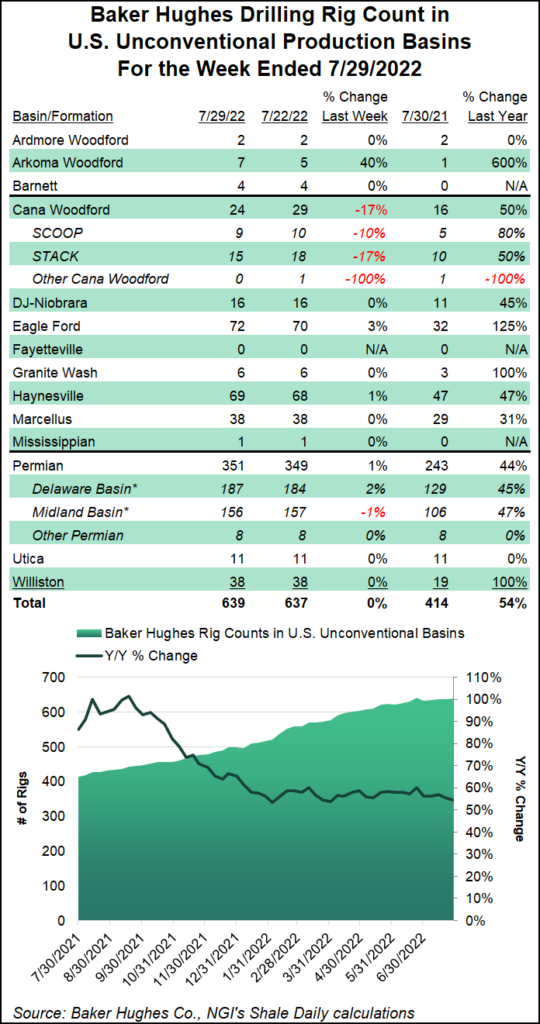 Oil-directed drilling increased by six rigs domestically, with two natural gas-directed rigs and one miscellaneous unit also added for the week. The combined 767 active U.S. rigs as of Friday represents a 279-rig year/year increase, according to the BKR numbers, which are partly based on data from Enverus.

Land drilling rose eight units for the period. Horizontal rigs increased by 10 in the United States, while one vertical rig was added. Partially offsetting was a two-rig decline in directional units. Offshore, the Gulf of Mexico picked up one rig to raise its total to 15.

The Canadian rig count, meanwhile, rose nine units to end at 204 as of Friday. Changes there included a 13-rig increase in oil-directed rigs, partially offset by a four-rig decline in natural gas-directed drilling.

Counting by major drilling region, the Permian Basin, Eagle Ford Shale and Arkoma Woodford each added two rigs week/week, while one rig was added in the Haynesville Shale. On the other side of the ledger, the Cana Woodford posted a five-rig decline week/week in the latest BKR count.

In the state-by-state count, Texas saw a six-rig increase for the period, while Louisiana, New Mexico, Oklahoma and Pennsylvania added one rig each. West Virginia saw a two-rig decline week/week, the BKR data show.

Domestic crude production recently rebounded to its 2022 peak, according to the latest data published by the Energy Information Administration (EIA).

But producers ramped back up during the week ended July 22, boosting output by 200,000 b/d week/week to average 12.1 million b/d, the EIA said Wednesday in its Weekly Petroleum Status Report.