Texas once again is the most attractive jurisdiction in the world for oil and natural gas investment, according to the Fraser Institute’s 11th annual global survey of energy executives. 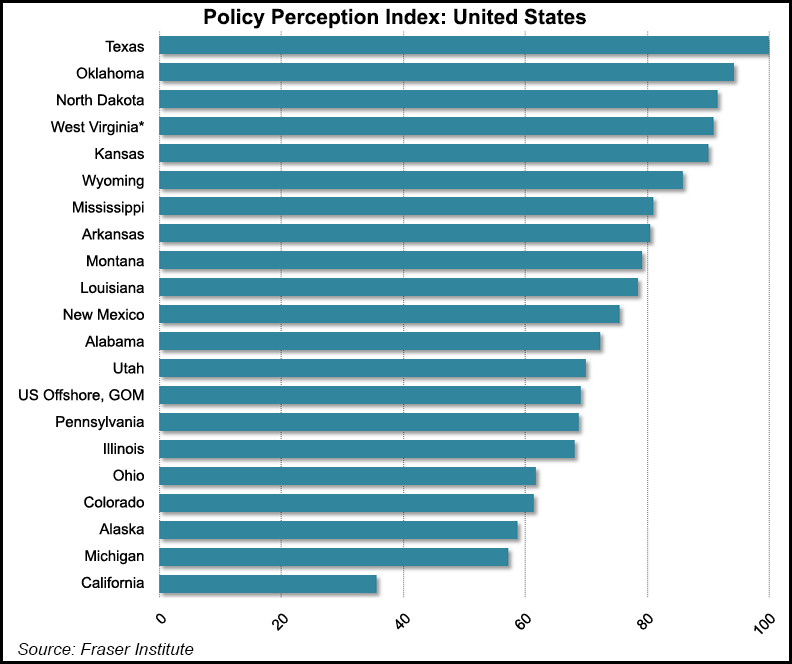 Oklahoma, second in this year’s survey, last year was ranked the leading global jurisdiction for energy investments, the Canadian think-tank said in its survey issued Tuesday.

“Texas and Oklahoma have, for years, been seen as the most attractive jurisdictions in the world for oil and gas investors — proof that sound regulatory policies and stable environmental protections help attract scarce investment dollars even when commodity prices are down,” said Fraser’s Kenneth Green, senior director of natural resource studies and the survey’s co-author.

The 2017 Global Petroleum Survey tallied responses from 333 oil and gas executives to evaluate 97 jurisdictions that hold 52% of proved global reserves and account for 66% of total output.

Of the 15 jurisdictions with the largest petroleum reserves worldwide, Texas is No. 1, followed by United Arab Emirates, Alberta, Kuwait and Egypt. Among regions, Europe finished second to the United States, followed by Canada and Australia.

However, every global region except Africa, Canada, Latin America and the Caribbean experienced declines in investment attractiveness from 2016, according to the survey.

“With oil and gas investors losing confidence around the world, it’s crucial for policymakers to pursue sound regulatory and tax regimes — and perhaps most importantly stable environmental protections — that attract, not deter, petroleum investments,” Green said.

Of the 39 jurisdictions with medium-sized reserves, the 10 most attractive for investment are Oklahoma, North Dakota, Newfoundland & Labrador, West Virginia, Norway-Other, Wyoming, Norway-North Sea, UK-North Sea Offshore, Arkansas, and the Netherlands.

The only Canadian jurisdictions in the medium-size group are Newfoundland & Labrador, which ranked third of 39, and BC, which was 31st of 39.

Canada may be the third leading jurisdiction for energy investment, but British Columbia was ranked as the least attractive Canadian jurisdiction, followed by Alberta.

Texas, Oklahoma, North Dakota and Saskatchewan have been ranked in the top 10 in the last six surveys.

Countries, provinces, states and geographical regions such as offshore areas were ranked by Fraser based on the extent of barriers, which include tax rates, regulatory obligations, environmental regulations and the interpretation/administration of rules governing the upstream industry. Also ranked were concerns about political stability and security of personnel and equipment.

Jurisdictions evaluated were assigned scores on each of 16 questions pertaining to factors known to affect investment decisions. These scores were used to generate a Policy Perception Index for each jurisdiction to reflect the perceived extent of the barriers to investment.

The jurisdictions then were sorted into clusters based on the size of their proved reserves, which allowed for an apples-to-apples comparison of policy perception in the context of the resources available for commercialization.

“Our analysis of the 2017 petroleum survey results indicates that the extent of negative sentiment regarding key factors driving petroleum investment decisions has increased in many of the world’s regions,” said the authors.