The Texas upstream oil and gas industry added 2,300 jobs during February, still not back to its pre-pandemic levels, but slowly rising since last September, according to the Texas Oil & Gas Association (TXOGA). 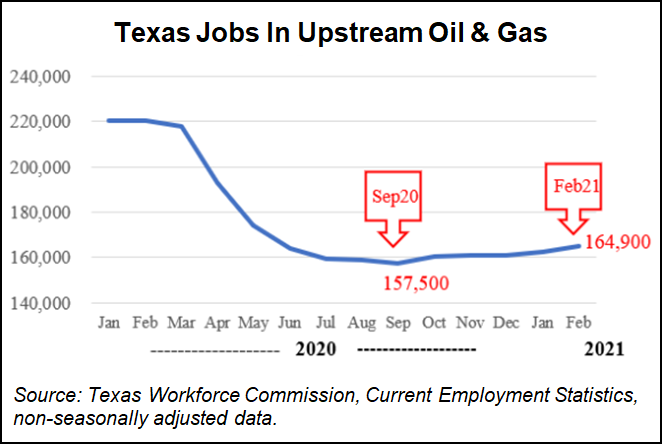 Texas Workforce Commission data indicated that the upstream sector has added 7,400 jobs since the low point in September. Total upstream employment in Texas stood at around 164,900.

“The resilience and reliability of the Texas oil and natural gas industry is remarkable, and it is the reason this industry will be essential to the energy mix for decades to come,” TXOGA President Todd Staples said. “Every Texan should be encouraged that jobs in this vital sector are returning after a difficult season.”

The country saw thousands of jobs lost over the course of last year as energy demand dried up and prices fell. The losses hit Texas particularly hard. Most U.S. energy companies are headquartered in Houston, and most of the country’s activity is centered in the Permian Basin, the largest field in the country.

Texas is reporting more activity in the oilfields of late based on rig count data and surveys of executives.

A recent survey by the Federal Reserve Bank of Dallas also showed oil and natural gas activity — including jobs — sharply expanded during the first three months of the year in Texas, New Mexico and Louisiana.

A recent analysis by the Texas Independent Producers and Royalty Owners Association, aka TIPRO, indicated jobs were rising in the Lone Star State.

Unique job postings in the Texas oil and gas sector totaled 7,090 in January, up from 6,764 in December and 6,559 in November. The TIPRO report corresponded to the period from November through January.