Texas oil and gas regulators are looking for ways to reduce natural gas flaring, a particular problem  in the Permian Basin, by providing incentives and requiring operators to justify why they need exemptions. 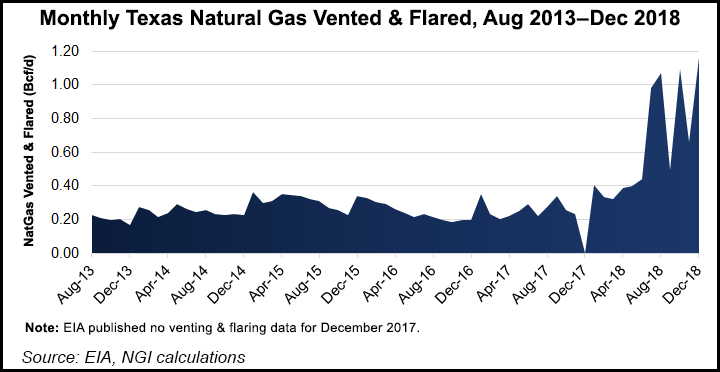 Draft rules were approved Tuesday by the three-member Railroad Commission (RRC), and will now undergo a 30-day comment period.

Chairman Wayne Christian said the RRC “took an important first step in ensuring we have the data necessary to get an accurate view of the scope of flaring in Texas. Since the downturn, the rate of flaring has gone down with more than 99.5% of the gas produced in the month of May sold and beneficially used to generate electricity, cook dinner or make hundreds of consumer products.

“Now is the opportune time to implement meaningful recommendations to reduce flaring before oil and gas production climbs back to previous highs.”

The RRC for months has worked on ways to reduce the wasted gas. In June, regulators heard from exploration and production (E&P) executives about how to curb flaring and venting, with an industry coalition issuing recommendations on best practices. The draft rules incorporated recommendations from the industry task force. If they were to become final, the rules would:

The RRC last year granted about 7,000 exceptions for flaring/venting, 27% more than in 2018, as a lack of gas infrastructure, particularly in the Permian, led some E&Ps drilling for oil to burn off the gas.

The vote by the RRC to advance the draft rules coincided with new data provided by staff that showed there were nearly 480 potential violations during 2Q2020, which included flaring/venting without approval, unlit flaring and failing to flare for safety reasons.

RRC conducted more than 1,900 inspections during the quarter, mostly in the Permian and the Eagle Ford Shale.

The rate of flaring, which is the ratio of gas flared to gas produced, declined overall from June 2019 to May, according to the RRC data. Nearly 66% of the decrease was recorded between February and May, as the Covid-19 pandemic led many operators to shut-in or curtail production.

In addition, nearly 100% of the Texas-produced gas in May was not flared or vented, Christian noted.

The vote came one day after 15 members of the Texas House and Senate sent a letter to the three-member RRC urging more stringent rules to reduce flaring and venting by 2025.

“In the last seven years, the commission has granted operators more than 27,000 permits to flare, one resulting in the burning of nearly 1 Tcf of gas,” the joint letter stated. “Flaring rates in Texas are twice the rates in neighboring New Mexico. This profligacy wastes the state’s fossil fuel resources, results in lost tax revenue, harms our environment and public health, and is a ‘black eye’ for the state of Texas.”

In 2018, the representatives noted, “venting and flaring in just the Permian Basin wasted more natural gas than the annual gas use of Arizona and South Carolina. In addition, Texas does not collect taxes on most gas that is flared, preventing the state from gaining any revenue from wasted natural gas for the rainy day fund, schools and roads. Flaring is a significant source of global warming pollution.”