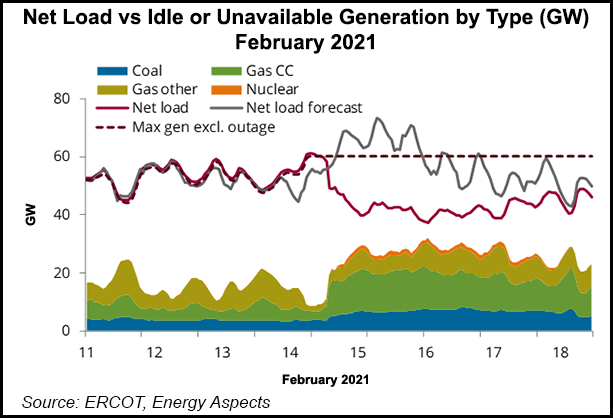 A proposed reorganization would provide relief to Griddy customers unable to pay their electric bills as a result of scarcity pricing imposed in the wholesale power market during the storm.

Griddy on Monday blamed the Electric Reliability Council of Texas (ERCOT), the independent system operator that manages the flow of electricity to 90% of the state, an estimated 26 million-plus customers. Griddy said ERCOT was responsible for the “financial devastation” stemming from the storm.

Griddy CEO Michael Fallquist said ERCOT “made a bad situation worse” by leaving the scarcity pricing in effect “long after firm load shed instructions had stopped. Our customers paid 300 times more than the normal price for electricity during this period.”

While most retail electricity consumers are shielded from fluctuations in the wholesale power price, Griddy gives customers access to real-time wholesale prices, allowing them to monitor and adjust their electricity usage.

“Prior to Winter Storm Uri, Griddy was a thriving business with more than 29,000 customers who saved more than $17 million dollars since 2017,” Fallquist said. “The actions of ERCOT destroyed our business and caused financial harm” to Griddy customers.

According to Griddy, “Prior to the unprecedented market events that resulted in prices staying at $9,000/MWh for 87.5 hours, the real-time electricity price had only reached that level for a total of three hours since 2015.”

Griddy management cited a letter to PUCT from independent power market monitor Potomac Economics Ltd. It read, “ERCOT’s failure to remove the price cap in accordance with the intent of the PUCT price order was ‘inappropriate pricing intervention’ that resulted in $16 billion in additional costs.”

Texas Attorney General Ken Paxton announced March 1 he was suing Griddy. He accused the REP of passing “skyrocketing energy costs to customers with little to no warning, resulting in consumers paying hundreds or even thousands of dollars each day for electricity.”

“We built Griddy to improve an antiquated industry by giving our customers access to wholesale pricing, real-time data and the ability to help balance the grid while lowering their own bills,” said Craig. He added that the Griddy model “would have worked in February 2021, had the grid not failed and the regulators not intervened. No retail energy provider or consumer should have to forecast and protect against such extreme and unforeseeable circumstances.

“We firmly believe in our model but, in order for it to be successful, the grid has to function properly, and prices have to be set by market forces. The actions of ERCOT caused our customers to unnecessarily suffer and caused irreparable harm to our business.”

Griddy is not the only Texas REP to file for bankruptcy because of Uri. Waco-based Brazos Electric Power Cooperative also is seeking Chapter 11 protection, blaming “excessively high invoices” from ERCOT amid the cold weather event.

Texas legislators have unveiled a series of bills in recent days to correct the failures that caused February’s crisis. One bill would prohibit REPs such as Griddy from offering wholesale-indexed products to consumers.

The “most significant” bill proposed so far is one that would direct PUCT to initiate a rulemaking for weatherizing electrical systems, according to analysts at ClearView Energy Partners LLC.

In a note to clients, the ClearView team indicated that legislative proposals requiring PUCT to retroactively reprice wholesale markets during the storm period are likely to be introduced over the coming days and weeks.

“We remain skeptical that the state would coalesce behind some of the other reform proposals discussed in committee hearings, such as the creation of a capacity market or interconnection with other grids,” analysts said.

In related news, Texas Gov. Greg Abbott said Tuesday he had accepted the resignation of PUCT’s Arthur D’Andrea, who was the only remaining commissioner still serving after the other commissioners resigned following the February crisis.

Although renewable, nuclear and fossil generation all experienced outages during Uri, natural gas-fired plants are the leading source of power generation in ERCOT. Gas facilities reported the most capacity knocked offline as wellhead freeze-offs, power plant malfunctions and surging demand across much of the country led to scarcity of the molecule.

“The remainder stemmed from onsite issues such as frozen equipment and severe frequency reductions, which accounted for 5.9 GW and 1.8 GW, respectively.”

The wellhead freeze-offs “were exacerbated by power outages to production equipment as oil and gas infrastructure was not considered critical…by most electricity distribution companies,” Energy Aspects researchers said. “We estimate that if oil and gas wells had not lost power, 1.6 GW (0.3 Bcf/d) of gas plants could have operated on Feb. 15.”

U.S. natural gas production plunged to daily lows of 70 Bcf/d on Feb. 16-17 at the peak of the cold snap, according to analysis by IHS Market. Production then sharply rebounded to close out the final five days of the month at above 91.5 Bcf/d.

“Outages that lasted for more than four days across ERCOT…resulted from a combination of near-record cold weather and underperformance of all generation types, especially natural gas and coal, as well as reduced supply of gas,” the Energy Aspects team said.