A push to revamp allowed natural gas flaring in Texas oilfields is underway, with potential changes coming as soon as this fall. 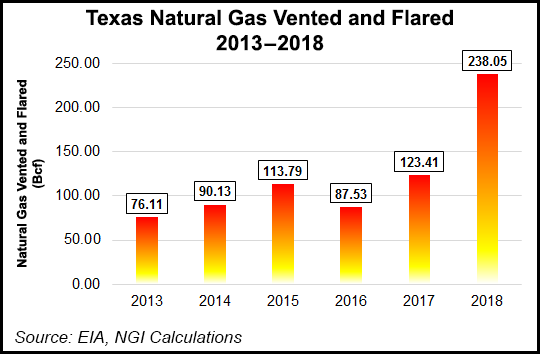 The Railroad Commission of Texas (RRC) on Tuesday heard from oil and gas executives about how to curb flaring, with an industry coalition issuing recommendations on best practices. Covid-19 has crushed energy demand and reduced activity across the state, particularly in the Permian Basin and Eagle Ford Shale, and some analysts expect flaring to decline sharply in the second half of the year.

Texas needs to have policies to “drastically reduce” flaring because investors want more information on how E&Ps are dealing with climate change, Christian said.

The chairman has directed RRC staff to consider whether flaring limits could be implemented as soon as this fall.

“I am very concerned by the rate of flaring in Texas,” Christian said during the webcast meeting. “We cannot continue to waste this much natural gas and allow the practice of flaring to tarnish the reputation of our state’s thriving energy sector to the general public and investors on Wall Street.”

Commissioner Ryan Sitton, however, expressed concerns about the financial burden of requiring E&Ps to reduce flaring. “When somebody says ”by 2025 we need to simply do away with flaring altogether,’ the question is, do we ignore economics?” he asked.

Determining how to improve RRC data “will be a priority,” said Commissioner Christi Craddick.

The RRC last year granted about 7,000 exceptions for flaring, 27% more than in 2018, as a lack of gas infrastructure particularly in the Permian led some E&Ps drilling for oil to burn off the gas. In one case, however, the RRC last summer voted 2-1 to exempt Dallas-based Exco Operating Co. LP from flaring at some wells in the Eagle Ford Shale even though the wells were connected to a Williams pipeline.

Christian, who was the lone dissenter to Exco’s flaring exemption, told NGI’s Shale Daily last year that he considered flaring to be a “critical part of the well construction process,” but he had a “duty to my constituents to prevent waste and believe that if an operator has the ability to transport their gas to market, they should. I am aware of the economic reasons to flare, but if an operator is going to make money on the aggregate after selling their oil, it does not seem in our long-term best interest to flare the gas.”

E&P executives at the hearing Tuesday shared their concerns about flaring, and many are working on ways to reduce it. Parsley Energy Inc.’s Stephanie Reed, vice president, said the Permian pure-play has reduced flaring to 1% this year from 3% in 2019, even after acquiring Jagged Peak Energy Inc., which was flaring more than 20% of its gas production in 2019.

Parsley planned out its oil drilling program and invested in more gas infrastructure, Reed said, as “we recognize that it is our responsibility to minimize emissions.”

The Texas Methane and Flaring Coalition also provided the RRC with detailed recommendations on collecting more data and improving the system to limit flaring permits, while not calling for a ban. More technology also was recommended to cut down on the emissions.

“To further our goal of ending routine flaring and minimizing methane emissions, the coalition has worked to improve workable requirements at the regulatory level,” it said. However, voluntary efforts led by industry “typically drive the most significant and lowest-cost solutions.”

Under RRC’s Statewide Rule 32, gas may be flared while a well is drilled and for up to 10 days after it is completed. Beyond the 10-day period, the commission requires operators to obtain exceptions for specific situations and circumstances, such as a lack of infrastructure or for safety reasons.

Because there may be situations when flaring is necessary, “it is essential that all of these options are available to operators as this will lead to a more workable situation which accomplishes the goal of reduced flaring,” the coalition said.

The Texas Oil and Gas Association (TXOGA) leads the coalition with six other industry trade associations and 40 E&Ps.

“Operations are different and operators are different, but these steps will lead to reduced flaring,” said TXOGA President Todd Staples. “Continued innovation and technology implementation will enable job and economic growth and further the industry’s leadership role in the stewardship of Texas’ natural resources and environment.”

Still, the Environmental Defense Fund (EDF) and other environmental groups voiced skepticism about how Texas E&Ps plan to move forward. A recent EDF survey found that in the Permian, more than 10% of the flaring involved venting raw methane into the atmosphere, in part because of malfunctions.

The EDF called on the commission to set a firm goal to end routine flaring by 2025.

“Fundamentally, the flaring problem is an incentive problem,” the EDF’s Colin Leyden, director of regulatory and legislative affairs, told the commissioners. “The economics of the business are built around the liquids, with dry gas often treated as a waste product. Too often, flaring is the cheapest option…

“Operators in this state have sent 1 Tcf of natural gas up in smoke since 2013, enough to meet the yearly needs of every home in Texas three times over. The unnecessary waste and pollution from routine flaring is an affront to the values we all hold true. That’s why you hear everyone from mineral owners, investors and environmentalists, to oil and gas companies themselves, calling for an end to flaring.”

According to a recent report by the Institute for Energy Economics and Financial Analysis (IEEFA), operators working in the Permian flared about 238.1 Bcf in 2018. Cross referencing the commodity prices on days when gas was flared, IEEFA estimated that Permian E&Ps burned a record $749.9 million of gas, nearly double the value flared in 2017.

“Flaring is a gratuitous display of oversupply with detrimental consequences for the environment and is, simultaneously, an impediment to the growth requirements of the Texas economy,” IEEFA’s researchers wrote.