With about a month to go in the regular legislative session, Texas lawmakers are again inching their way toward changing up the Railroad Commission of Texas (RRC), including its name, or maybe not.

Two bills based on recommendations made late last year by the Texas Sunset Advisory Commission (see Daily GPI, Nov. 20, 2012) are being considered. State Rep. Dennis Bonnen’s (R-Angleton) HB 2166 and state Sen. Robert Nichols’ (R-Jacksonville) SB 212 were identical when filed. HB 2166 was gutted in the House Energy Resources Committee, where it was pending Friday. SB 212 was voted out of the Senate Committee on Natural Resources intact on Wednesday.

The senate bill would change the name of the RRC to the Texas Energy Resources Commission. However, some lawmakers and others during committee meetings have expressed a preference for dropping the “Resources” from the new name, and the old name is favored by others in a nod to history and preserving continuity.

But the legislation would impose other reforms on the RRC. For instance, it would restrict the ability of the three commissioners to receive campaign contributions from parties with contested cases before the RRC. It also would limit their ability to seek another office while they are sitting on the commission, requiring that they resign if they run for another office more than 18 months before the end of their current RRC term.

The RRC underwent its previous Sunset review in 2011, but the legislation spawned by that review, which included a name change and other reforms, failed to pass (see Daily GPI, May 27, 2011; April 15, 2011). 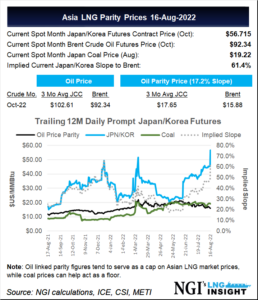 India, Pakistan and Bangladesh are looking to buy LNG in an extremely tight market as top Asian buyers Japan and South Korea have come out to cover their winter requirements. “While global markets have been focused on Europe and the supply dynamics there, the unintended consequences of energy sanctions on Ukraine are weighing heavily on…