At its peak, Hurricane Harvey knocked out more than 10,000 MW of electricity generating capacity in the Texas grid, while relatively cool temperatures across most of the state also reduced natural gas demand. 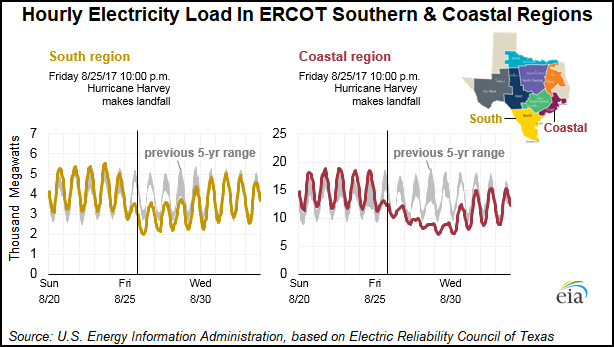 Harvey, which first trampled communities in South Texas at landfall Aug. 25 and then flooded the Greater Houston area as it stalled on the Gulf Coast, caused substantial electricity outages, as power plants and transmission infrastructure were affected by high winds and significant flooding, the Energy Information Administration (EIA) noted Wednesday.

The aftermath is still being felt nearly three weeks later, as communities and businesses slowly return to business.

Electricity demand in the Texas grid, which is overseen mostly by the Electric Reliability Council of Texas (ERCOT), was lower than usual for the time of year “mainly because of the customer outages in storm-affected areas in South Texas and along the Gulf Coast and cooler temperatures across much of the state,” EIA said.

In many parts of Texas, maximum temperatures in the week before Harvey were trending in the 90s to 100s on a daily basis. In the week after making landfall, temperatures fell into the 70s and 80s.

Harvey forced offshore and onshore operators in the Eagle Ford Shale area to shut-in. Total natural gas production dropping ahead of and in the aftermath by about 2.4 Bcf/d, including around 1.3 Bcf/d from offshore areas 1.1 Bcf/d from onshore. The bulk of the production declines are concentrated in the Eagle Ford of South Texas, but extend into the Gulf of Mexico (GOM) and onshore Louisiana. Texas volumes are down about 0.98 Bcf/d from last week, with about 0.73 Bcf/d of the declines occurring in South Texas, Genscape said.

“Despite the significant amount of generator outages, ERCOT was able to meet total electricity demand in part because of the lower levels of demand,” EIA said.

However, EIA said Tuesday in its Short-Term Energy Outlook that Harvey’s long-term impact has upended forecasts.

“At the time of publication, continuing uncertainty exists regarding the timeline for the return to normal operations for a broad range of upstream production, refining, pipeline, and terminal and distribution infrastructure,” EIA said. “The severity and duration of these outages create additional uncertainty about the path of energy prices in the coming weeks and months.”