A water desalination plant in Texas has been outfitted with a promising technology developed at the Massachusetts Institute of Technology (MIT) and is being expanded to process up to 12,000 barrels per day of produced water from oil and gas drilling. 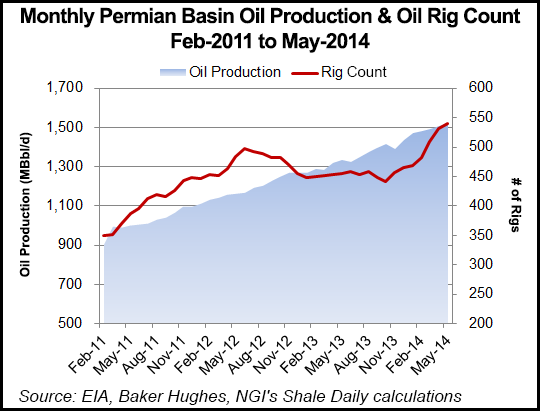 The Permian Basin plant in Midland uses a technology called carrier gas extraction (CGE) — a process involving humidification, dehumidification and desalination. It was developed by Gradiant, an MIT spin-out based in Woburn, MA, with offices in Dallas and a regional presence in Midland, TX.

Gradiant CEO Anurag Bajpayee told NGI’s Shale Daily the CGE process begins by pre-treating produced water to remove oil and grease residue, and any suspended solid particles. The water is then heated and sprayed into a porous material with a large surface area directly contacting it with a carrier gas. In the process, the carrier gas, which is dry air for the oil field application, gets saturated with pure water vapor from the brine.

“The air containing the water vapor is then sent through a bubble column, where there are basically shallow pools of pure water through which this air bubbles,” Bajpayee said Wednesday. “In the process there’s rapid mixing, which cools the humid air and condenses the water back out that the air had picked up, thus creating more fresh water.

“The multi-stage bubble column itself is in fact a new type of heat exchanger. It’s a heat and mass exchanger because it’s also cooling the air down and condensing the water vapor. In this process, heat of condensation is picked up by the incoming produced water. So we recover a lot of the energy that we had given to the heated water keeping the energy consumption to a minimum.”

Bajpayee said Gradiant has a contract with a large independent exploration and production (E&P) operator that is supplying the wastewater to be treated. He said expansion of the Midland plant is expected by the end of August, after which the facility would be able to accommodate more wastewater.

The facility currently may process 5,000 barrels/d of produced water. The product of the plant is desalinated fresh water but the output quality can be optimized based on requirement such that the cost per barrel of water treated is comparable with that of disposal of produced water and fresh water sourcing.

“Right now [the operator] has literally tens of thousands of barrels [of wastewater] in that field,” Bajpayee said, adding that the recycled water could be used for hydraulic fracturing (fracking) operations. “In the State of Texas at least, there is so much fresh water requirement for fracking and completion operations that it can all go back for reuse with the same customer that’s giving us the produced water in the first place.

MIT mechanical engineering professor John Lienhard, who heads the university’s Center for Clean Water and Clean Energy, where the technology was developed, told NGI’s Shale Daily the technology is a potential game changer in places like West Texas, where water is scarce.

“This technology has the key advantages of being very robust and of not needing new materials/membranes/fluids to be engineered in order for it to function properly,” Lienhard said Wednesday. “It also has cost advantages relative to incumbent technologies based on mechanical compressors.

“I think that Gradiant’s system has the potential to relieve a lot of the environment concerns associated with the disposal and use of water in oil and gas operations, particularly around unconventional production,” which uses fracking.