The Texas upstream oil and natural gas economy achieved its cyclical peak last February and then contracted for 10 straight months, according to the statistics issued Tuesday by the Texas Alliance of Energy Producers (TAEP). 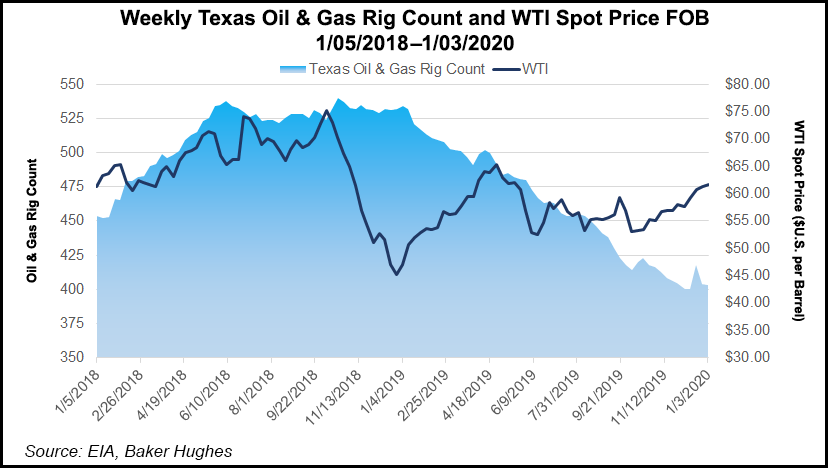 The group’s Texas Petro Index (TPI), calculated using a comprehensive group of exploration and production (E&P) factors with 1995 as the base year, finished 2019 at 193.6, down 9.1% year/year. From the February peak through December, the index lost 9.4% of its value.

“The TPI was actually first knocked off its growth track in the fourth quarter of 2018 with sharp declines in crude oil prices, but then recovered in early 2019 before embarking on a sustained decline for the balance of the year,” said TAEP economist Karr Ingham, who created the index.

Statewide, energy employment also was off from 2018.

However, “extraction” jobs, comprised of people on the payrolls of related E&P operating and producing companies, “continued to increase through year-end…” The sharpest employment slump was in the “support activities” sub-sector, which includes oilfield services and drilling companies.

“Unlike the previous two contractions, crude oil prices actually stabilized in 2019, helping to sustain higher levels of E&P activity than would otherwise be the case in a sharply declining price environment, and this helped to sustain industry employment on the operating/producing side of the industry employment ledger,” said Ingham.

For example, in 2008 and 2009, oil prices peaked then fell by more than 70% over an eight-month period. During 2014, oil prices hit their zenith in June and then began a 20-month reversal, leading to an estimated 80% decline in terms of daily prices.

“It was simply a year of stable $53-54 oil, and while that’s obviously not the recipe for industry expansion, one can easily imagine a scenario much worse because we’ve seen it the past two downturns.”

Activity levels had increased steadily through October 2018, as oil prices climbed to above $67 on average after reaching above $70 earlier in that month.

“Oil prices in 2019 were effectively $15-20 lower compared to those peaks, and that will always push the rig count lower along with permits, completion and industry employment,” Ingham said.

Other factors weighed on activity levels last year as well, most notably the associated gas growth from the Permian Basin in particular, which only increased more as operators struggled to find solutions.

“In some cases, that simply meant the crude oil wells were never drilled in the first place, pushing activity levels yet further downward,” Ingham said.

The statewide rig count averaged 463 in 2019, off about 10% year/year. Last month’s average rig count of 406 was down by more than 23% from about 531 rigs working the fields in December 2018. The number of drilling permits issued in Texas last year also declined by more than 12% year/year, with oil well completions off by about 18%.

“At the heart of the issue are petroleum markets that are simply well supplied, negating the need for higher prices that would in turn push activity levels upward,” said Ingham. “Even as prices, the rig count and well completions have declined, production has continued to increase.”

Texas oil production was up by around 15% last year, which followed a 26% increase in 2018 from 2017. Oil production continued to set records in 2019 too, surpassing the 5 million b/d mark in July and exceeding 1.85 billion bbl for the year.

According to Ingham, Texas operators supplied about 41% of U.S. oil production last year, with daily production at the end of 2019 comprising about 42% of total domestic production.

“Declining prices and activity levels will surely affect Texas production, and in fact have already done so by slowing the rate of growth in statewide crude oil production,” Ingham said.

“But will production peak in the near term and decline by a significant degree, which is the implied outcome necessary to move crude oil prices higher? Recent history says ”no.’”

“Current conditions are not nearly so severe, and $50-plus crude oil pricing suggests the maintenance of high levels of production for the foreseeable future. That means Texas and U.S. consumers will continue to be the beneficiary of plentiful, affordable energy.”

The efficiencies achieved by the upstream oil and gas industry in Texas have led to record production with fewer employees and rigs required.

“The implications of this changing scenario are altering the connection between the industry and the statewide economy,” according to Ingham. He said that connection is still strong, as the upstream economy “remains an economy-moving component of the broader statewide economy, and that will not change anytime soon.”