Natural gas flaring from the Texas portion of the Permian Basin is likely to increase in the coming years but the industry may be able to eliminate most of the routine emissions at little cost, according to a new analysis. 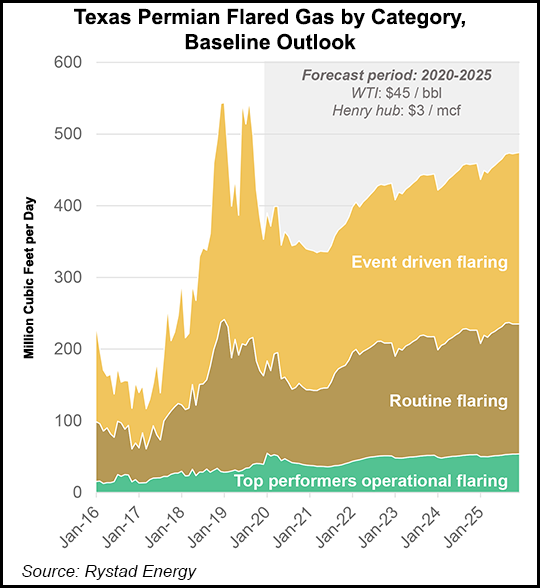 The Rystad Energy analysis, commissioned by the Environmental Defense Fund, found that the flaring is “persistent and likely to increase” as production rebounds. Eliminating the routine flaring, researchers said, could be a cost-effective measure with a nudge by the Railroad Commission of Texas (RRC).

“For example, if Texas were to adopt a 98% gas capture policy, Rystad found that about 84% of routine flaring volumes and 50% of total flared volumes in the basin could be mitigated without cost.

“Not only is routine flaring the cheapest type of flaring for operators to eliminate, it would create significant value for the resource as a whole.”

Exploration and production (E&P) companies could “realize an additional $400 million in wellhead value by 2025 if they were required to capture 98% of the gas they produce.”

Gas capture requirements offer operators “a degree of flexibility while establishing enforceable, concrete targets,” according to the researchers. Updated rules issued by the RRC in November require E&Ps working in the Texas oilfields to show why they need permission to flare or vent natural gas.

While flaring and venting gas is limited under the state’s rules, the RRC routinely has allowed exceptions.

“The truth is that the majority of routine flaring comes from a relatively small number of leases,” researchers said.

More than half of the Permian’s oil-producing leases had a flaring intensity below 2% from 2015 through 2019. The “top performers” already have achieved 0.4% flaring intensities, but they “are doing so at a competitive disadvantage to laggards that flare at much higher rates,” researchers said.

Flaring volumes last year slumped sharply because of the loss of energy demand related to Covid-19. Production levels are expected to accelerate as demand returns, with flaring and venting forecast to climb.

In its baseline flaring outlook, Rystad estimated that a West Texas Intermediate oil price of $45/bbl and an average Henry Hub natural gas price of $3/MMBtu would lead to about 340 new wells ramping up each month in the Texas Permian.