Clayton Williams Energy Inc. (CWEI) is tweaking its Eagle Ford Shale fracking operations and experimenting with downspacing. In the Delaware Basin, three of its recent wells ran into trouble, and the Midland, TX-based independent said it is monitoring the pullback in oil prices as it considers plans for next year. 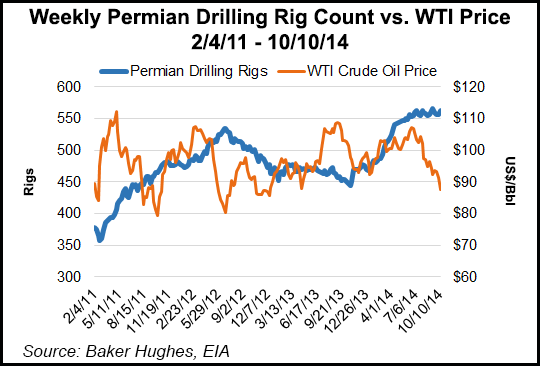 For now, CWEI said it plans to continue drilling at its current pace for the rest of this year. Fourth quarter production is expected to average between 16,600 and 17,000 boe/d.

The company’s Eagle Ford acreage (175,000 acres, net) is on its legacy Austin Chalk block in Burleson, Robertson and Lee counties, TX. It has 22 horizontal wells in the area that have been on production for 30 or more days. The peak 30-day production rate has averaged 518 boe/d (96% oil). Six additional wells have been on production for less than 30 days or are in various stages of completion, and three wells are currently being drilled. Typical drilling and completion costs in the area range from $5 million to $6 million per well for CWEI.

The company also has two Wolfcamp C horizontal wells in Reeves County that have been on production for 30 or more days with peak rates averaging 777 boe/d (78% oil; 11% NGLs). One additional Wolfcamp C well is awaiting additional drilling/completion operations, and one is currently being drilled. Depending on lateral length and completion design, the Company’s typical drilling and completion costs in this area range from $6.5 million to $9 million per well.

During the third quarter, two Reeves County wells experienced single-point casing failures in the lateral portions of their wellbores, and another had a casing leak in its vertical portion. A modified frack is to be used to complete one of the wells while another well’s lateral will have to be re-drilled. A tie-back is planned to resolve the vertical casing leak.

Wunderlich Securities has a “buy” rating on the company and a $144/share price target based on $100/bbl WTI for crude and $4.36/Mcfe at Henry Hub for gas. “We are in the process of revaluing our price assumptions in light of the recent drop in crude prices and expect this to impact CWEI’s NAV negatively,” wrote analyst Irene Haas in a note Friday.