A ruling to require Texas producers to shut-in 20% of their oil output beginning June 1 was tabled until early next month as regulators ponder how to assist the state’s ailing energy industry. 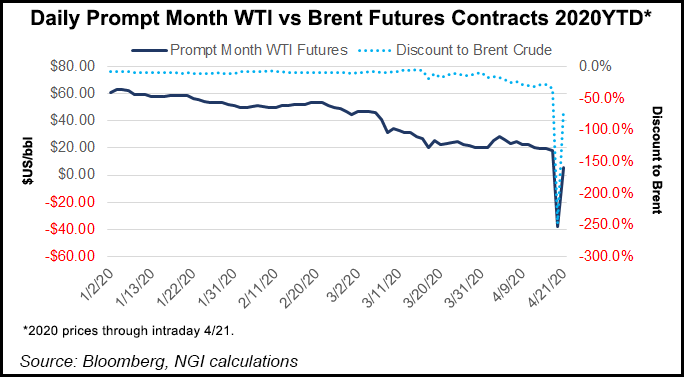 During a hearing Tuesday, the Railroad Commission of Texas (RRC) was expected to rule on whether oil quotas should be mandated at 20% following requests led by Permian Basin pure-plays Pioneer Natural Resources Co. and Parsley Energy Inc.

The RRC held a 10-hour hearing earlier this month to hear from proponents and by opponents, who argued that free markets should dictate whether exploration and production (E&P) companies shutter wells rather than requiring prorationing.

Many E&Ps already are shutting in wells across the Lower 48 as low oil prices have decimated demand, in part because of Covid-19. Storage is nearing the top, and shut-ins began before the bottom fell out on Monday for West Texas Intermediate (WTI) prices.

The three-member RRC, led by Chairman Wayne Christian, was joined by Commissioner Christi Craddick, who each signaled at the previous hearing they were opposed to prorationing. The motion was tabled to ensure a decision would not be stymied by a lawsuit. Commissioner Ryan Sitton has been in favor of prorationing from the start.

Not so fast, Christian said.

“We need to make darn sure when we make the motion that we have the legal grounds to do what’s appropriate,” he said. Added Craddick, “anything we do will likely end up in court.” The commission plans to revisit the issue on May 5 after consultation with the Texas attorney general.

Christian also said he has begun talks with regulators in other oil producing states in North Dakota and Oklahoma, as well as regulators in Canada. He acknowledged there was an “elephant in the room” from the negative May WTI contract. The Covid-19 pandemic is “a dark time for the energy producers in our economy,” adding the RRC “is not taking this issue lightly.”

Under Sitton’s proposal, all E&Ps producing more than 1,000 b/d in Texas would be required to reduce output by 20% beginning June 1. A contingency would require another 4 million b/d of total reductions by other U.S. and Canadian producers, as well as the Organization of the Petroleum Exporting Countries and its allies.

“I don’t believe that inaction on our part is acceptable,” Sitton said, as “taking weeks, even days…to act is itself a choice.”

Neither Craddick nor Christian seconded Sitton’s proposal. Clearly the odd man out at the RRC, Sitton now plans to direct commission staff to prepare an order for consideration at the May hearing.

The Texas Oil & Gas Association, which is opposed to prorationing, said tabling the issue was the correct thing to do.

“We appreciate the commission’s interest to support producers, but proration would make matters worse, not better,” President Todd Staples said. “Producers are acting to reduce production, and the state and federal governments are exploring additional options to assist. We applaud the commissioners for maintaining regulatory certainty, which is essential to economic recovery, and encourage them to focus on recovery not on creating a cartel.”

Pioneer and Parsley’s request for prorationing has been far outweighed by free market proponents. During last week’s marathon hearing, heavyweight E&Ps, particularly those with far-reaching portfolios beyond Texas, were led by ExxonMobil, Chevron Corp. and Occidental Petroleum Corp. However, even other Permian pure-plays, including Diamondback Energy Inc., told the RRC that it favors free markets over mandates.

Whether opinions changed after the WTI rout on Monday is uncertain. However, long-time market observers see little relief for oil prices in the near term.

Former BP plc chief Lord John Browne, who led the supermajor from 1995 to 2007, said during an interview with BBC News U.S. oil prices would remain in the cellar because of the crude oversupply. Browne is a former partner at private equity Riverstone, which co-owns UK-focused E&P Cuadrilla Resources Ltd.

“The prices will be very low, and I think they will remain low and very volatile for some considerable time,” Browne told the BBC. “There is still a lot of oil being produced that is going into storage and not being used. This is very reminiscent of a time in the mid-1980s when exactly the same situation happened — too much supply, too little demand and prices of oil stayed low for 17 years.”

“Some may dismiss Monday’s fall into negative WTI prices as a quirk of the futures market on the last day before a contract ended,” said IHS Markit’s Jim Burkhard, head of oil markets. “But the fact that prices went this low at all reflects brutal market forces that will not disappear with the expiration of a single monthly contract.”

Rystad Energy analysts noted Tuesday that Brent crude has begun “feeling the squeeze” on prices. Oil markets analyst Louise Dickson said any hopes that Monday’s “market carnage would be a one-day story have been quickly extinguished.”

Oil storage shortages “are real and will not be resolved at the current market conditions, even with the agreed OPEC-plus cuts,” she said. “More output curbs are needed, generous ones, in order to see supply and demand balancing again. That will not of course relieve storages, but as demand bounces when some of the lockdowns are over, some supplies could also be sourced from the full-by-then tanks.”

What happened to WTI, Dickson said, “can happen to any traded commodity, if the forces behind the short are aligned.” However, “Brent should be more resilient, given it is made up of multiple crude grades and has natural egress to seaborne markets, and thus can chase global demand in a way that WTI cannot. There are also fewer players with a vested interest in seeing Brent collapse — Saudi and Russian crudes are both unofficially pegged to Brent, for example.”
Meanwhile, an administrative law judge (ALJ) plans to recommend to the Oklahoma Corporation Commission to approve an emergency order declaring oil production may be an “economic waste.”

The ALJ plans to submit the recommendation following a request by producer LPD Energy Co., which, if approved, would require E&Ps to shut-in wells without losing leases. The Oklahoma Energy Producers Alliance (OEPA) filed a separate application asking for regulators to set limits. The LDC request may be considered by the OCC before the end of the month, while the OEPA application is set to be heard on May 11.