The oil and natural gas industry paid Texas $2 billion in royalties in 2018, up 18% year/year, with most of the money directed to fund public schools and higher education. 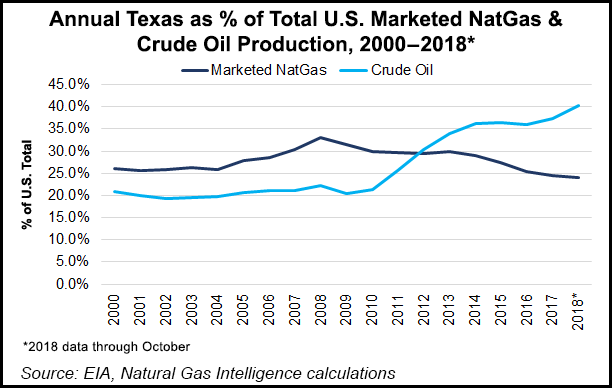 Royalties constitute the “only substantive new capital deposited annually” to the two funds, according to the Texas Oil & Gas Association (TXOGA).

“The Texas Permanent School Fund is the largest educational endowment in the nation because of oil and natural gas royalty revenue,” said TXOGA President Todd Staples. “With a balance of $41.4 billion at the end of fiscal year (FY) 2017, the PSF topped Harvard University’s endowment, worth $39.2 billion.

“It is remarkable that the PSF, seldom recognized outside of Texas, leads the pack among all educational endowments — and all Texans benefit from it.” All of the state’s universities and colleges receive a portion of the PUF, including the systems of The University of Texas and Texas A&M University.

According to the PSF’s annual report for FY2017, distributions are made every year “to pay a portion of educational costs in each school district within the state. During FY2017, the fund distributed about $1.06 billion for education.

“With royalties up 18% in FY2018, we can only expect the balances of these important endowments to grow, providing meaningful support for our public schools and university systems,” Staples said.

“Other business sectors in Texas, such as grazing and land leases, that pay royalties to the state represent just 1/20th of the total,” about $1 million, according to TXOGA.

“The impact of oil and natural gas royalty revenue plays an outsized role in supporting Texas students and in turn, securing our future and our economy,” Staples noted.