The Railroad Commission of Texas (RRC) reported the number of permits issued in June to drill wells in its East Texas District, which includes part of the gassy Haynesville Shale, jumped 200% year/year. 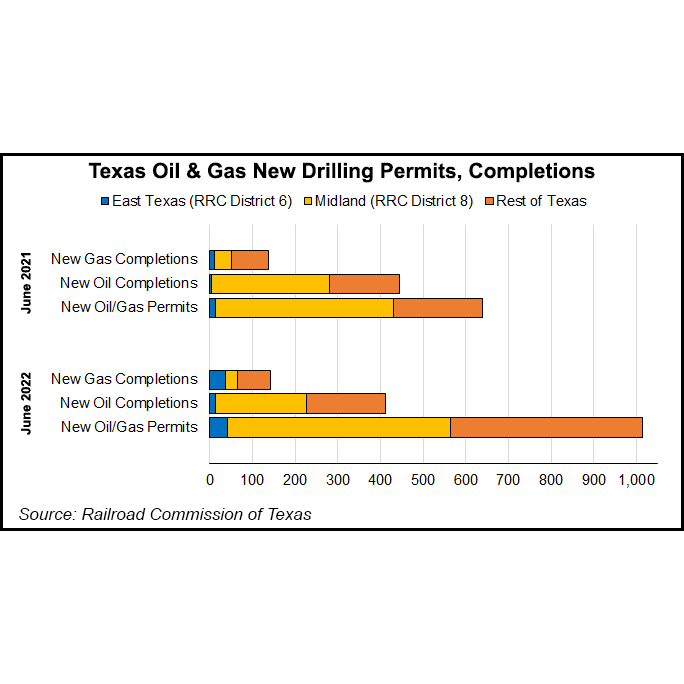 RRC issued 42 permits to drill oil and gas wells in the East Texas area, aka District 6, compared with 14 permits in June 2021.

RRC staff issued 523 permits for oil and gas wells in June in the agency’s Midland District, which includes the oil-rich Permian Basin. The latest monthly drilling permit total for the region, aka District 8, is 26% higher than the year-ago figure.

Earlier this month, Baker Hughes Co. (BKR) reported that year/year rig counts were up 41% in the Haynesville and 47% in the Permian.

Elsewhere, in RRC’s eight other districts, new drilling permits for June were up 115% year/year: 448 compared with 208.

New completions in June across the Midland District totaled 29 for gas wells, down 27.5% year/year, and 213 for oil wells, down 23%, according to the RRC.

Based on well type, 113 of last month’s original drilling permits were for gas wells while 263 were for oil, 726 were for oil or gas, 35 were for injection wells and nine were for other permits, RRC said.