The Texas oil and natural gas industry is poised to find its “cyclical trough” early this year, according to one of the state’s leading industry groups. 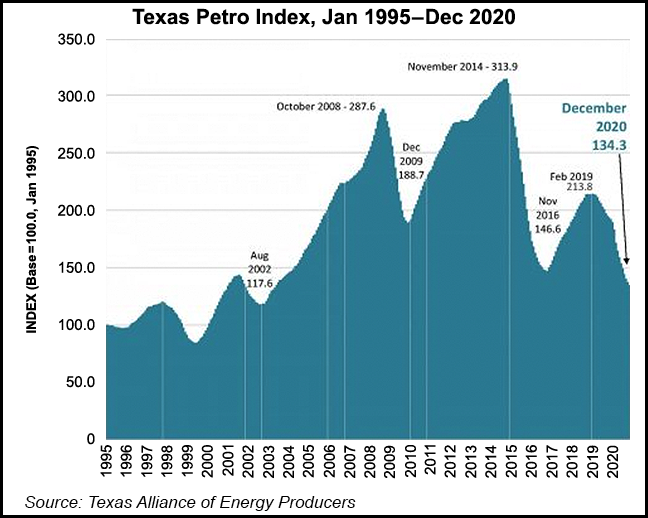 The state’s share of total U.S. oil production had grown to roughly 42% in 2019, and by the end of 2020 its share was up to 44%, according to the Texas Petro Index (TPI) by the Texas Alliance of Energy Producers. Multiple state upstream indicators such as oil prices and rig counts indicate the industry has made it through the worst of the Covid-19 lows.

According to the TPI, a few industry jobs were added back in the final four months of 2020 following the low-employment point in August. Estimates showed that of the 78,000 jobs lost, about 2,300 jobs have been added back to oil and gas company payrolls.

“That the industry is adding jobs is encouraging, pointing to at least somewhat better times ahead in 2021,” said Alliance petroleum economist Karr Ingrahm. “The Texas Petro Index is poised to find its cyclical trough, hopefully in the first quarter 2021, and begin to register a long and steady recovery from the ravages of Covid in 2020.”

“The job loss is devastating,” said Ingham. He noted that the 150,000 estimated upstream jobs remaining in Texas at the end of 2019 was the lowest since 2005, when Texas crude production was only about 20% of production levels in 2019 and early 2020.

“In addition, wages were pushed down sharply for those who remained on oil and gas company payrolls,” he said. “The combined effects of lost jobs and lower industry wages only served to worsen the effects of Covid on the statewide economy, and on local and regional economies with strong ties to oil and gas production.”

The Texas upstream oil and gas economy experienced a contraction of 30% last year as a result of the pandemic and the subsequent decrease in global energy demand, according to the Alliance.

“As these numbers would suggest, the Texas upstream oil and gas economy was already in a state of contraction before the onset of Covid-19 as an economic event in 2020, with the steady decline in 2019,” said Ingham.

The recent demand contraction for global energy was “easily the sharpest demand drop in the shortest amount of time on record,” according to the TPI. In turn, this created the perfect conditions for rapid crude oil price decreases. Further, the brief but catastrophic market share war between Russia and Saudi Arabia made the already untenable market situation drastically worse.

Texas statewide production reached its all-time record of more than 5.4 million b/d of oil in March 2020.  Between March and May, however, output dropped by almost 20% to 1.03 million b/d. Since last May, nearly 407,000 bbl have been added back to daily production, ending the year at an estimated 4.81 million b/d.

Fueled by stubbornly mild weather and an improved supply outlook, North American natural gas prices fell more than $1 from Monday to Wednesday and closed in on the $4.00/MMBtu mark for the first time since early summer. Even as gas prices in Europe continue at record levels, the North American supply/demand and pricing picture has…