The Texas energy sector is making substantial progress to reduce methane emissions, with flared natural gas volumes down by almost three-quarters between June 2019 and May, according to an industry-backed report. 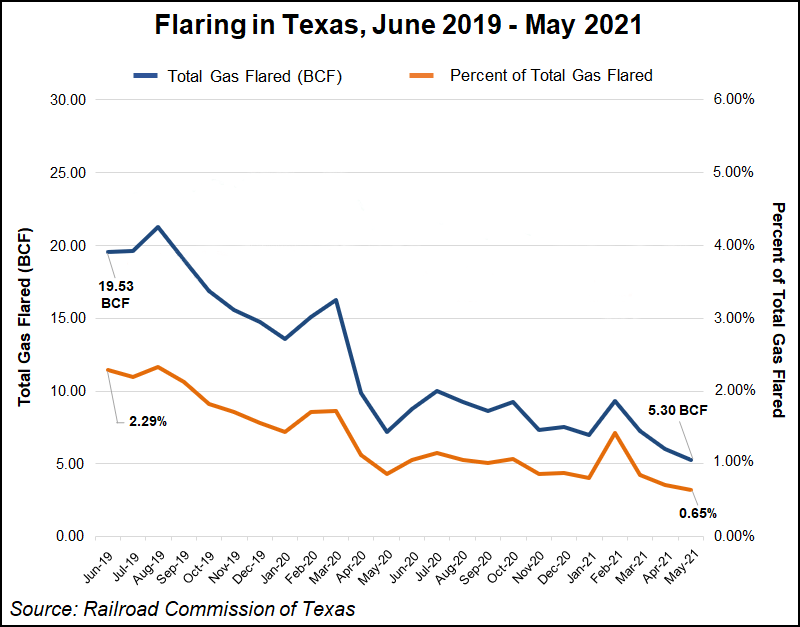 The Texas Methane & Flaring Coalition on Wednesday issued the first edition of its Methane & Emissions Report. The coalition, established in December 2019, includes seven trade associations and more than 40 Texas oil and gas operators.

“In Texas, natural gas that is flared represents less than 1% of all natural gas produced, and innovation and new technologies continue to drive this number down,” the coalition noted.

Earlier this year the industry group said it was working with its oil and gas partners to snuff out flaring in the state by 2030. Flaring has been under more scrutiny by the Railroad Commission of Texas (RRC).

RRC data indicate that between June 2019 and last May, the percentage of gas flared from total gas production in Texas decreased 72%, the coalition noted. During the same period, the gas volumes flared decreased by almost as much, 73%.

Flaring and venting gas are a significant contributor to emissions, particularly in oil-rich basins that include the Permian Basin, according to a recent study by the Clean Air Task Force and Ceres. In the Permian, for example, which Texas shares with New Mexico, venting and flaring contribute an estimated 25% to total greenhouse gas emissions.

The coalition’s members pointed to the progress but said more needed to be done. The Texas Independent Producers & Royalty Owners Association (TIPRO) and the Texas Oil & Gas Association (TXOGA), two of the state’s largest energy groups, said efficiencies are working.

“In Texas, we hold ourselves to a higher standard when it comes to emissions, and that truly shines through in this report,” said TIPRO President Ed Longanecker. “The men and women who work to ensure Texans and the world have reliable, affordable energy necessary for everyday life are focused on innovations to improve our emissions footprint. Those efforts contribute directly to the coalition’s work and the important progress the industry is making.”

TXOGA President Todd Staples said, “Initiatives like the Texas Methane & Flaring Coalition have been bold in their efforts to end routine flaring and reduce methane emissions even further, and data confirms their endeavors are successful.

“The oil and natural gas industry is and will continue to be the cornerstone of a cleaner, stronger, better future with lower emissions and less carbon intensity. Unmatched investment, innovation and collaboration will deliver this future with the energy needed to maintain and improve modern life,” Staples said.

South Texas Energy & Economic Roundtable Advisory Council chair Teddy Carter said the industry’s focus to advance and pioneer technologies “has been and will continue to be the driving force of continued environmental progress. South Texas communities are stronger than ever because of it.”

“Investing in domestic natural gas pipelines would help to make even more headway in reducing emissions,” Cannon said. “Expanding this critical infrastructure is the blueprint for continued environmental progress.”