The Texas oil and gas industry has faced a unique set of challenges this year, but it continues to provide strong economic support and will for decades to come, according to one of the state’s top energy groups. 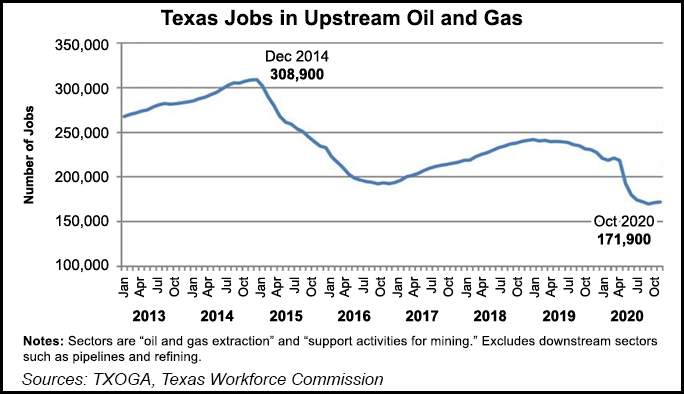 The Texas Independent Producers & Royalty Owners Association (TIPRO) issued its latest report Thursday on employment trends, examining the state’s upstream, midstream and downstream sectors for September and October. The data is used to advance legislative, regulatory, educational and workforce-related initiatives to benefit the industry and the Texas economy.

“Despite an unprecedented array of challenges facing the Texas oil and natural gas industry this year, the sector continued to provide significant economic support to the state and will continue to do so for decades to come,” said TIPRO Chairman Brent Hopkins, who also is CEO of Suemaur Energy.

“As the industry continues to recover, ensuring access to a qualified workforce will be essential to its future, as the industry will have to overcome two significant hurdles from an employment perspective.”

First, he said, the industry this year faced “the combination of an ill-conceived price war followed by the market destruction of the Covid-19 pandemic.” That in turn “has driven a large number of the baby boomer generation out of the industry, many of which will not return, thus expediting the ‘great crew change’ that was already underway.

“Secondly, the perception of a hydrocarbon-free future has driven enrollment at the university level in disciplines critical to our industry to new lows. Just to recover to the levels of production Texas achieved at the end of 2019 will require a lot of additional manpower, and more importantly gray matter.”

TIPRO cited the Current Employment Statistics report from the U.S. Bureau of Labor Statistics, which noted that after six consecutive months of employment decline in the Texas upstream sector, employment rose by around 1,500 jobs in September from August followed by another gain of 600 positions in October over September. There also was a “slight uptick” in the state’s rig count.

During September and October, there were 58,280 total job postings for the Texas oil and natural gas industry, of which 7,917 “were unique,” according to data collected by TIPRO.

“These numbers extended a posting intensity of 7-to-1, meaning that for every seven postings, there was one unique job listing,” it noted. “This was close to the posting intensity for all other occupations and companies in the state (6-to-1), indicating average effort toward hiring for these positions.”

TIPRO also found 26,922 total job postings for the Texas upstream sector from September to October, of which 3,429 were unique with a posting intensity of 8-to-1. This was “higher than the posting intensity for all other occupations and companies in the region (6-to-1), typically indicating that employers may be attempting to hire people.

TIPRO President Ed Longanecker said the analysis also is “intended to identify other challenges facing employers and how we can effectively overcome those issues through collaboration, funding and training at the local and state levels to prepare, attract and retain talent.

“With the right policies in place, Texas can prepare the workforce of the future to allow the continued success of the oil and gas industry and other key sectors in the state that heavily rely on it.”