Following 23 months of consecutive growth, the Texas Petro Index (TPI) reversed in November and December in response to a sharp contraction in oil prices, with uncertainty about the direction of prices in 2019, petroleum economist Karr Ingham said. 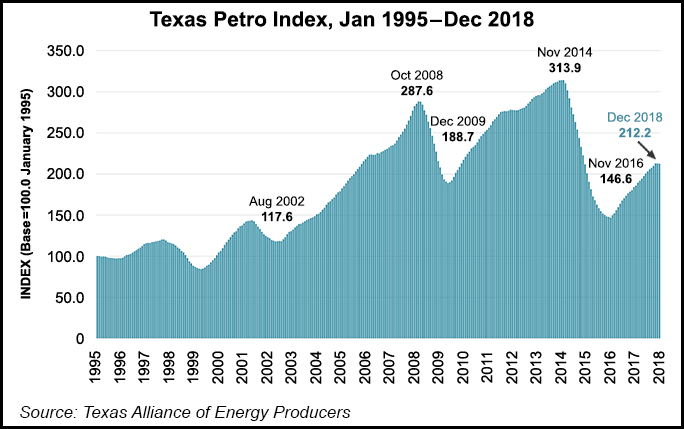 The decline in the TPI may not signal the end of expansion in the Texas upstream oil and gas economy, however.

“It has virtually always been the case that a decline in the Texas Petro Index signaled the onset of a contraction of some magnitude, but that may not be the case this time,” said Ingham, who created the index. He is petroleum economist for the Texas Alliance of Energy Producers (TAEP).

“A series of geopolitical market events may have been the primary culprit in that particular price event, and the market seems to be working through those in early 2019.”

Even as output and exports by members of the Organization of the Petroleum Exporting Countries (OPEC) surged, waivers were granted to several countries vying to purchase Iranian oil ahead of potential sanctions, which led to a “sudden but temporary oversupply, which then sent markets reeling,” Ingham noted.

“As these events play out, Saudi Arabia and OPEC have implemented production cuts anew, crude oil markets have stabilized, and prices have recovered a significant portion of what was lost. Increasing Texas and U.S. production remains of some concern, however, in terms of the price outlook for 2019.”

New records were established for Texas and U.S. crude oil production in 2018, according to published data from the Railroad Commission of Texas, the Energy Information Administration (EIA), and TAEP.

“Texas really flexed its muscle in 2018,” Ingham said, noting that for the year Texas oil production comprised around 40% of total U.S. crude output. “And daily production at year-end topped about 42% of U.S. daily production, and these numbers are on track for Texas to provide 45% of U.S. production by year-end 2019.”

While oil output fell late in the year, Texas natural gas production continued to escalate in 2018, up 9% from 2017 to an estimated 8.6 Tcf, with associated gas from oil drilling comprising roughly 38% of the total. Gas production in December was up 10% year/year at around 788 Bcf, or roughly 25.4 Bcf/d.

“The growth in Texas crude oil production, even in the face of lower prices, rig counts, drilling permits and employment compared to 2014 peak levels, remains the story of the year,” Ingham said. “Crude oil pricing will determine activity levels for most of the components of the TPI, and may alter the rate of growth in statewide production in 2018.

“But Texas production in 2019 will outpace 2018 production levels and climb ever deeper into record territory.”

The TPI finished the year at 212.2 for December, down slightly from 212.4 in November and 212.5 in October. Several components of the index flattened at year’s end, as the rig count and the number of drilling permits issued slowed or declined during the final two months of the year. Combined with the slump in prices, it was enough to knock the TPI off its growth track.

Also off track late in the year was employment.

“Industry employment appeared to decline from October to November, but employment doesn’t generally respond that quickly to price movements,” he noted. “And in fact, employment recovered in December to surpass the October total so we shouldn’t read too much into a one-month trend, which is no trend at all,” he said.

According to Texas Workforce Commission estimates, with revisions by the TAEP, about 238,300 Texans were directly employed last year on upstream payrolls consisting of producers, oilfield service companies and drilling companies.

“That represents an increase of nearly 16% compared to 2018, and the addition of 56,700 jobs over the course of the current expansion dating back to September 2016,” Ingham noted.

The TAEP calculated that the Texas rig count finished the year at 531 on average for December, an increase of 16%-plus from the December 2017 count, but down slightly from 533 in October and November. The state also issued 5.6% more permits last year than in 2017.