The Texas upstream oil and gas economy remained in contraction through the first nine months of the year, with the near-term outlook murky, according to a top state energy group. 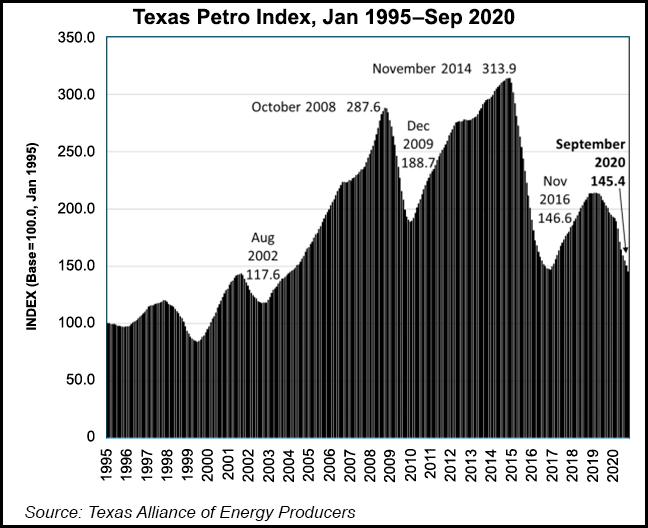 The Texas Alliance of Energy Producers (TAEP), which serves more than 3,000 members, said the Texas Petro Index (TPI) for September indicated the exploration and production (E&P) activity index declined for the 19th straight month, to 145.4 from 150.4 in August. The monthly E&P index also was down by 27.5% year/year.

“The Texas Petro Index shows that the upstream oil and gas economy in Texas was in a state of contraction for virtually all of 2019 and early 2020, even before Covid-19 came along,” said TAEP petroleum economist Karr Ingham, who created the index.

“But the downturn obviously sharpened in March of this year as the rapid demand loss — coupled with a market share fight between Saudi Arabia and Russia — began to cripple oil and gas development activity in the U.S.”

Of the 32% loss since the peak in early 2019, more than 23% has occurred since last February. The April TPI decline was the largest one-month fall in the history of the analysis, the petroleum economist noted.

Oil prices have recovered somewhat since, but “other measures of statewide E&P activity are just now finding their Covid low points, including the rig count, drilling permits and industry employment.”

The upstream industry in fact added a few jobs in September. If those job gains hold, it would be the first increase in the state’s E&P jobs since the onset of the pandemic, “and in fact the first industry employment additions since April 2019.”

The most recent peak in upstream oil and gas jobs was about 228,450 in December 2018. Industry employment generally has declined steadily since then.

From December 2018 through August, “nearly 70,000 direct E&P jobs were lost, including nearly 50,000 just since February of this year,” Ingham noted. “In September, a handful of jobs were added — less than 50, according to the estimates. But that tiny fraction of industry jobs added back hopefully suggests that oil and gas employment in Texas has turned the corner after 21 months of industry job loss.”

The headline oil and gas employment data in Texas suggested that about 700 jobs were added back in September, which would also be the first month of job growth since April 2019, TAEP noted. However, the estimates are not seasonally adjusted, which means the numbers for one month should be properly compared to the same month in the prior year. Jobs data also is not adjusted for changes in trends that may be developing over the course of a given year.

The TPI uses seasonally adjusted and “early benchmarked” industry employment estimates from the Federal Reserve Bank of Dallas to enhance accuracy. The estimates are further adjusted by the TAEP to filter out mining jobs unrelated to oil and gas.

There were 533 rigs working across the state in October 2018, but through last August, 428 of those rigs had been idled. Of the rigs idled, 289 had only been parked since March, the data showed.

The number of drilling permits issued in Texas, which also has declined since late last year, hit bottom in May. Issued permits have improved modestly since. However, the monthly drilling permit totals are the “lowest by far over the entire history” of the TPI, whose data dates to 1994.

“Production increases in recent months in Texas and the U.S. may appear a bit troublesome simply because growing production could easily overwhelm crude oil demand, which has stalled in the third quarter,” said Ingham. “However, I think these increases may be temporary. There is simply not enough new drilling activity to grow production steadily going forward, so crude oil production is likely to flatten or decline, perhaps even beginning with the release of October estimates, and remain lower well into 2021 compared to peak levels of late 2019 and early 2020.”

While the TPI continued to decline, September was considered an important month because it provided signals of the potential recovery in the state’s upstream oil and gas economy.

“Normally, there is very little reason to get excited about the addition of three rigs and 30 industry employees statewide from one month to the next,” said Ingham.  “But when they represent the first increases in over a year and a half, and on the heels of the worst demand contraction on record thanks to Covid, the numbers are very exciting because hopefully they signal the beginning of the end of this nasty downturn.”

The Railroad Commission of Texas issued 5,032 original drilling permits in the first nine months of the year, “a decline of nearly 44% compared to the total through September 2019,” the index indicated.

Also of note are the job losses, according to the index.

ExxonMobil in October announced it would lay off nearly 14,000 people, including around 1,900 in the United States.

“Unfortunately, most of those cuts are expected to come from its management workforce in Houston,” Ingham said. “That is just the latest in a rash of similar announcements” from, among others, BP plc, Chevron Corp. and Royal Dutch Shell plc.

The “combined effects” could be to “shed more than 50,000 jobs in total. And they are not the only ones. Oil and gas companies up and down the size spectrum have been eliminating jobs since well before the pandemic set in this year.”

The announced job losses are global, and not all would be from the United States. The U.S. jobs lost also would not all be from Texas, “though a majority of them probably will,” he said.

“It was already the case that upstream oil and gas employment in Texas and nationally was never again going to reach its all-time peak from late 2014. Covid and its after effects will only exacerbate this phenomenon by crimping energy demand going forward for some time relative to where it would be absent the onset of the global pandemic.”

The oil and gas industry “is clearly under stress in 2020 and that will continue to be the case in 2021” Ingham said. “Even before Covid, fewer employees were needed to produce record and growing volumes of crude oil. That less crude oil will be demanded relative to pre-Covid levels bodes yet worse for employment in the oil and gas producing, drilling and oilfield service sectors.”

The “tiny number of upstream jobs” added in September were the first since April 2019, Ingham noted. “Have we reached a trough in industry employment? Time will tell.”