Preliminary data from the Railroad Commission of Texas (RRC) show that both crude oil and natural gas production in the Lone Star State climbed during June. 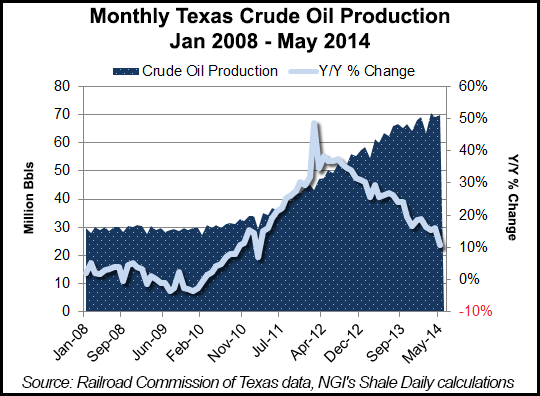 But the final official Texas crude oil production figure will likely be considerably less than that 76.95 million bbl calculated figure, according to Patrick Rau, NGI director of strategy and research. “Crude oil production for March, April, and May 2014 came in at between 69.0 and 70.4 million bbl. The high end of that range, which occurred in March, is the only time total production has topped 70 million bbl in Texas in any month since January 2008,” he said. “Moreover, monthly crude oil production measured on a year-over-year percentage basis has been falling steadily since posting a 48.5% y/y gain in February 2012. By comparison, May 2014 production was up just 10.4% y/y. The June 2014 estimated 76.95 production figure would represent a 23.3% y/y gain, which would be a sudden and vast departure from the recent downward trend.”

In the last 12 months, total reported production was 802 million bbl of oil and 7.9 Tcf of natural gas.