The Railroad Commission of Texas (RRC) on Tuesday turned back a motion that would have required the state’s producers to reduce oil output by 20%. 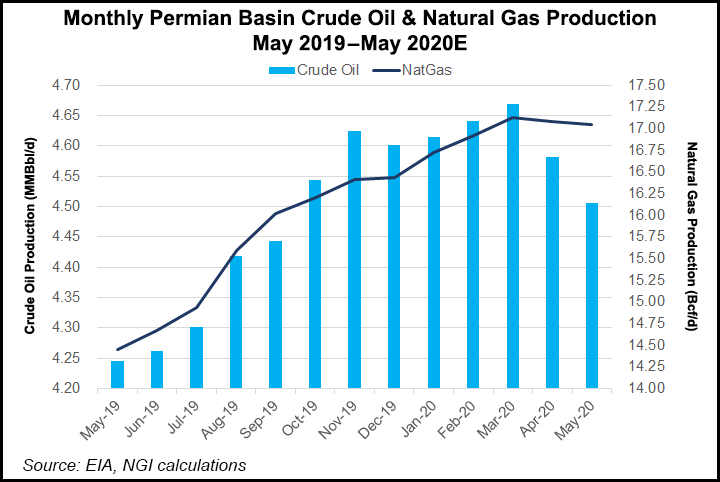 Chairman Wayne Christian and Commissioner Christi Craddick voted against the proposed prorationing, while Commissioner Ryan Sitton, who had pushed to mandate the quotas, was opposed.
“We received thousands of comments…in this tremendously important time in the industry,” Christian said. “Whether for or against, Texans care about getting our once thriving energy sector back on top.”

However, “I do not believe proration is the magic bullet to save the industry.”

The RRC held a marathon 10-hour hearing in April to consider the curtailments, initially requested by Permian Basin producers Pioneer Natural Resources Co. and Parsley Energy Inc. Pros and cons were offered by exploration and production (E&P) companies and other energy groups, both large and small.

Christian, who long signaled he was opposed to quotas, urged the free markets be allowed to work as the Covid-19 pandemic will come to an end and put “people back on the road and in the skies.”

In 1950, Texas controlled more than 20% of the world’s oil supply; today it controls roughly 5%, Christian noted. Mandating quotas to require E&Ps to reduce oil output would not have a significant impact on global oil supplies. In addition, the E&P industry has stepped up as Covid-19 spread and oil demand has plummeted.

ExxonMobil has shut-in 100,000 b/d within the Permian for the foreseeable future. Permian pure-play Concho Resources Inc. has shut-in about 5% of its output. ConocoPhillips, which produces 70,000 b/d in the Permian, is cutting back across its North American plays with an overall reduction of 230,000 boe/d net.

E&Ps should determine for themselves what level of production is economical, said Christian.

In addition, Texas could end up the Lone Ranger if it were to mandate quotas, the chairman said. Since the start of the pandemic, he’s been in “regular contact” with North Dakota’s chief oil and gas regulator, Lynn Helms, to see how that state is dealing with a pullback in the prolific Bakken Shale. Christian also has discussed measures with regulators in Canada and other states. At this time, none plan to put quotas on oil output.

Why should Texas do what other states will not?

“I cannot agree to take this wrong action because it could make things worse,” Christian said. “The cold, hard truth is that the price of oil is not going to stabilize until the pandemic ends…”

He said he was willing to bet on the energy industry’s resurgence. In every time of peril for the country, Texas and for the U.S. oil and gas industry, “100% of time…we come out stronger, richer, more successful and better off than the time before. You can roll the dice on this. It won’t be some dern model with predetermined results.”

Craddick said she echoed Christian’s remarks. The “little guy” in the state “is very important for this agency….Keeping the industry and the jobs will continue to be a real focus…along with following the rules too.”

Sitton, in voting to oppose the measure, said the RRC had not done what Pioneer and Parsley had requested: calculate how much oil “waste” is produced. The commission had never determined “whether prorationing would prevent waste, or examine a mechanism about how to do things from a waste perspective…In the end, maybe proration is not the right answer…”

As market demand returns, Sitton said he feared Texas would never be able to produce at the levels before the pandemic began. Some experts are calculating world energy demand beyond the pandemic may be 5-10 million b/d less than it was in February.

Most of that production loss would come out of the United States, Sitton said. “And we will sit here in two ior three yeras and wonder why has the U.S. lost out in the Covid-10 environment…”

The Texas Oil & Gas Association (TXOGA) was opposed to the prorationing measure, and President Todd Staples heralded the RRC’s action against quotas, an approach that “would have made matters worse. The market is a much better arbiter of production than artificial government mandates.”

The commission may, however, adopt solutions to help operators weather this economic crisis, Staples said. As a member of the RRC’s Blue Ribbon Task Force for Oil Economic Recovery, Staples is working with other industry leaders to recommend regulatory, operational, legal and tax solutions that could allow the state’s E&Ps “to recover within the context of the free market.”

The RRC adopted some of the task force recommendations, which Staples said would be “meaningful to maintain jobs for employees and survival for employers.”