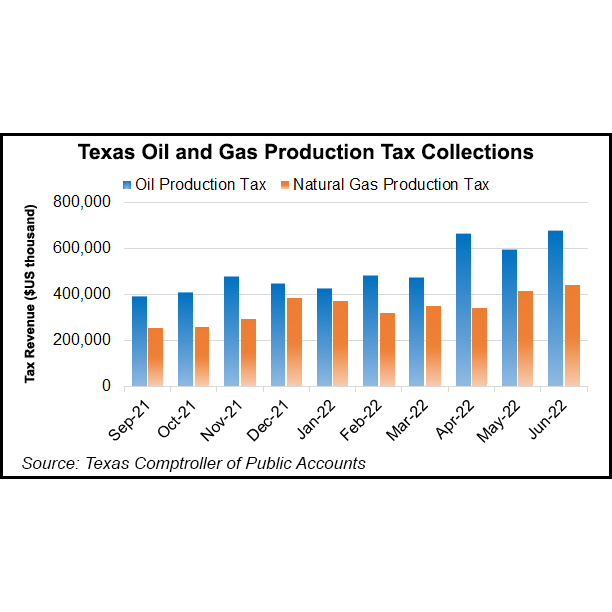 The Lone Star State’s latest natural gas production tax take beats the previous record for the levy, set in May, by 6.3%.

Also hitting an all-time high was the state’s oil production tax, which generated $679 million in June – an 87% year/year increase.

“In addition to paying record-breaking tax revenue which funds our schools, roads, first responders and more, Texas’ oil and gas industry is our economy’s lifeblood supporting roughly one-third of our state’s economy and paying an average salary of $130,000,” said the Railroad Commission of Texas’ Chairman Wayne Christian.

According to the Texas Comptroller’s office, a 7.5% tax based on market value is levied on natural gas and is primarily paid by the producer. In the case of the state’s oil production tax, the first purchaser of crude oil pays a 4.6 production tax on the oil’s market value, the agency said.

“All Texans benefit from a robust oil and natural gas industry that provides hundreds of thousands of good-paying jobs and pays billions towards our state’s economy, essential services and public education whether you live in the oil patch or not,” said TXOGA President Todd Staples.

In its latest Drilling Productivity Report, the Energy Information Administration predicted that the Haynesville and Permian would add 226 MMcf/d and 165 MMcf/d, respectively, of gas production from June to July.

The most recent data from Baker Hughes Co. (BKR) show 41% and 47% year/year rig count increases for the Haynesville and Permian, respectively.