Upstream oil and gas employment in Texas gained 4,300 jobs in March, which brought the statewide headcount to 184,700, the Texas Independent Producers and Royalty Owners (TIPRO) reported earlier this month. 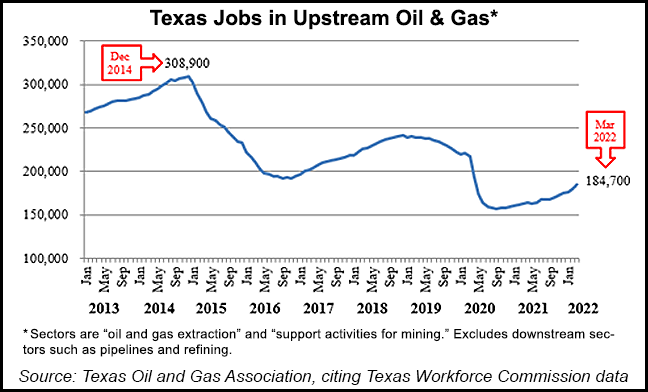 The top region for oil and gas industry employment is in Houston, which –as of the end of last month– had added 1,500 upstream jobs to reach 64,500 direct positions, TIPRO said. Houston metro upstream employment in March had 5,300 more jobs than a year ago, including 2,100 more E&P-related and 3,200 more OFS positions.

Separately, the Texas Oil and Gas Association (TXOGA) said the state’s upstream sector added 27,700 jobs through March, or an average of 1,539 jobs per month, since falling to a pandemic low in September 2020.

“The Texas oil and natural gas industry has proven resilient over the years and continued job growth in the upstream sector benefits every American and our environment,” said TXOGA President Todd Staples.

The trade group examined job listings across 14 industry sectors. The top category in March was once again support activities for oil and gas operations with 3,167 postings. Crude petroleum E&P and petroleum refineries were the next highest at 1,512 and 1,040 listings, respectively.

With 3,895 total unique oil and gas job postings, TIPRO concurred that Houston was the top city for March listings. Permian hub Midland was second at 1,256, followed by neighboring Odessa with 583.

According to TIPRO, the top three companies based on unique job postings in March were Baker Hughes Co. (637), Weatherford International plc (494) and Halliburton Co. (488).

TIPRO President Ed Longanecker predicted that “domestic production will continue to increase in the coming months.” However, he added that operators continue to face constraints to growth potential such as “workforce shortages, higher material costs, and an uncertain regulatory environment.

“Our industry needs more than a temporary green light from policy leaders in Washington to make the long-term investments necessary to achieve sustained energy security for our country and allies abroad,” he said.