Texas crude oil and natural gas production posted double-digit percentage losses year/year in October as the state continued to grapple with weakened demand and a soft price environment, according to the Railroad Commission of Texas (RRC). 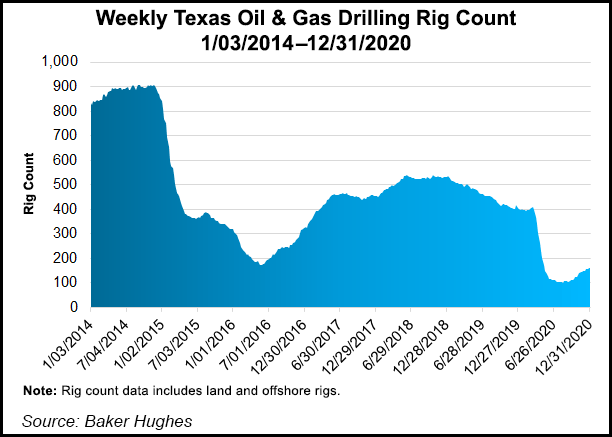 From November 2019 to October 2020, total Texas reported production was 10.4 Tcf of total gas and 1.5 billion bbl of crude oil, according to the RRC.

Despite the steep decline in output, the Permian Basin continued to be a bright spot in the state. Seven of the top 10 natural gas producing counties were in the West Texas portion of basin, which also sprawls across southeastern New Mexico. The list included Reeves, Midland, Culberson, Loving, Tarrant, Martin and Upton counties in the Permian, and Karnes and Webb counties in the Eagle Ford Shale. Panola County in the Haynesville Shale also ranked in the top tier.

Nine of the top 10 oil producing counties also were located in the Permian, with La Salle County in the Eagle Ford rounding out the list.

Upstream activity in Texas has been on a steady decline since 2019, but Covid-19 and the oil price war between Saudi Arabia and Russia further pressured oil and gas development, not only in Texas but across the United States.

Texas Alliance of Energy Producers petroleum economist Karr Ingham said in November that after nearly 70,000 direct exploration and production jobs were lost between December 2018 and August 2020, a handful of jobs were added in September. “…That tiny fraction of industry jobs added back hopefully suggests that oil and gas employment in Texas has turned the corner after 21 months of industry job loss.”Meanwhile, the latest rig data shows two more natural gas and one oil rig being added to the U.S. stack for the week ending Wednesday (Dec. 23). Baker Hughes said the Haynesville Shale turned in a strong week of growth, adding three rigs to bring the total to 43. The Permian, however, dropped a rig from its total. The combined U.S. tally finished the week more than 450 units below the 805 rigs active at this time last year.