Texas regulators are considering a change to policy that could allow the state’s producers to curtail oil output in light of the epic decline in crude pricing. 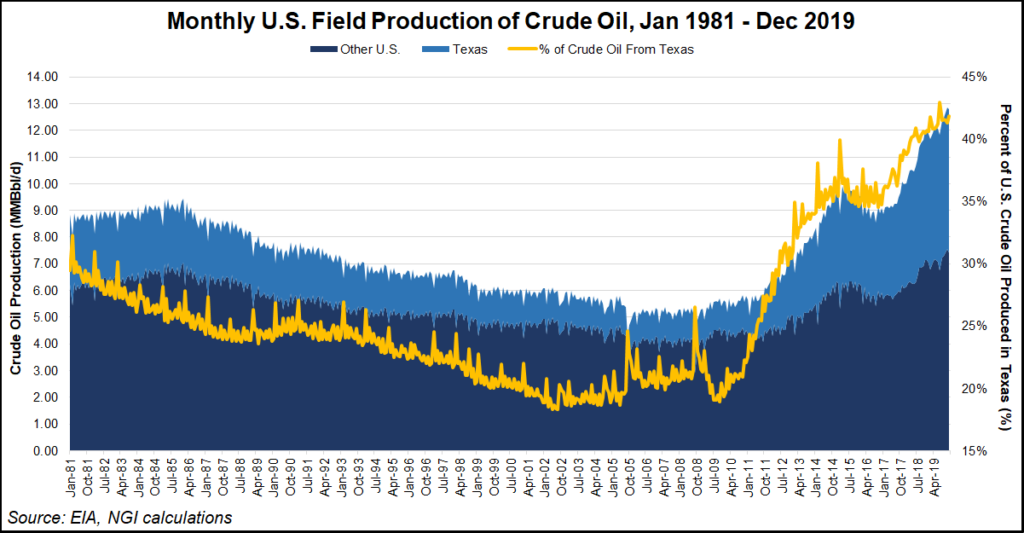 The Railroad Commission of Texas (RRC) has not proposed a formal change in prorationing oil production yet for exploration and production (E&P) operators, a spokesperson for Chairman Wayne Christian told NGI’s Shale Daily.

“A couple of Texas producers have inquired into the feasibility of the Railroad Commission prorationing production,” said Travis McCormick. “No formal change in policy has been proposed. Staff is looking into what that change in policy would entail from a practical standpoint at the agency.”

The proposal, which the RRC has not done since 1972, comes as West Texas Intermediate (WTI) prices remained below $30/bbl early Friday even after rising by double-digits a day before.

The E&P, midstream and oifield services sectors are reducing capital budgets, laying down rigs and cutting dividends, with some executive teams voluntarily reducing their salaries through the rest of the year.

The RRC also is mulling the action as the Trump administration prepares to buy up to 30 million bbl by the end of June for the Strategic Petroleum Reserve (SPR). President Trump on Thursday also hinted during a press briefing that he is seeking “medium ground” in the price war between the Saudi-led Organization of the Petroleum Exporting Countries (OPEC) and producing ally Russia.

“I spoke with numerous people that have a lot to do with it,” Trump said during the briefing. “And we have a lot of power over the situation. And we’re trying to find some kind of a medium ground…At the appropriate time I’ll get involved,” but admitted he was a “little bit torn” as the oil price decline would translate into low prices at the gasoline pump for U.S. consumers.

Rystad Energy’s Per Magnus Nysveen, head of analysis, said buying oil for the SPR would be a “very constructive measure” to help some domestic E&Ps “avoid collapse amid the international price war.

According to Rystad, Texas oil production to date this year had been increasing by around 50,000 bbl a month, and completions activity was on the rebound before the price crash.

“The country’s oil prices are at the moment risking to collapse completely due to massive demand destruction, as American commuters work from home and flights are canceled throughout the country. Production cuts could only help protect breakeven points and maintain the profitability of operations.”

Rystad’s Artem Abramov, head of shale research, said the SPR build could include draining about 500,000 b/d of Permian Basin sour crude production, as well as around 300,000 b/d of sour grades produced in East Texas, Louisiana and Mississippi.

“This means that there will be reduced supply of heavier grades for domestic refineries, which will ultimately require more imports of right quality,” Abramov said. “The decision provides absolutely some support for overall balances, but not necessarily a lot of help for domestic light oil producers.”

If the RRC were to allow production to be prorationed, particularly from the Permian, the No. 1 oil play in the country, “we will be in a completely different market environment,” Abramov said.

“I hardly see RRC implementing statewide production allowable rules for thousands of individual producers in a short time frame. In the medium-term, statewide regulation might reduce global market volatility, but will also reduce the investor interest and slow down the learning curve.

“Though one might argue that regulation in Texas could trigger more activity in New Mexico,” which shares the Permian and by itself is one of the country’s top oil producers.

Curtailing crude in Texas could do more than make room for the continued flood of OPEC-plus crude onto global markets, according to ClearView Energy Partners LLC. Reducing crude output in Texas “could also create space for crude oil production from New Mexico and North Dakota.”

The proposal “comes with a practical component,” according to the ClearView team. “Unlike private companies colluding to restrict output or set prices, government regulators can legally restrict the production of resources they oversee. Even so, we would suggest that commissioners in Austin may not want to jump the gun as long as diplomats in Washington are negotiating a stand-down with Saudi Crown Prince Mohammed bin Salman.

“Even if the U.S.-Saudi talks fall short, Texas regulators might also want to find a way to coordinate their actions with peer regulators in neighboring producer states (failure to do so would result in a de facto wealth transfer out of the Lone Star state).”

As to what the Trump administration’s intervention in the price war could mean, Rystad’s Bjornar Tonhaugen, head of oil markets, said the administration appeared to be “speaking with two tongues when it comes to oil prices and protecting its own interests.”

The United States “suddenly wants to interfere because oil prices are ”too low’ from the perspective of the U.S. shale oil industry,” Tonhaugen said. “But in the short term, low prices act as a tax rate cut for consumers when filling up their motor fuel tanks.”

As the damage to demand from the coronavirus pandemic and the price war begins to settle, the United States weighing into the supply debate could help in the dispute, he said.

“However, the market must remember that the tsunami of demand losses from the coronavirus will likely be four-to-five times as large in the second quarter than the flood of oil coming from OPEC-plus producers,” Tonhaugen said, “with oil prices likely having to cascade further down, despite the recent bout of optimism” displayed in WTI oil prices on Thursday after Trump said he could mediate.