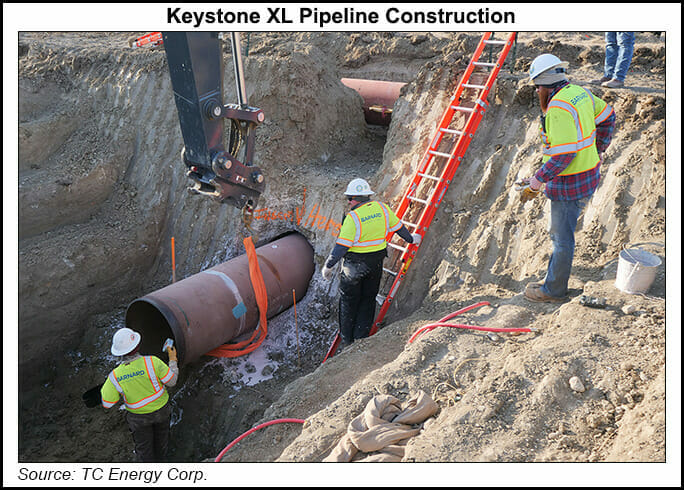 Upon taking office Jan. 20, President Biden issued an executive order (EO) rescinding the approval granted by President Trump for a critical 1.2-mile section of the pipeline crossing the Canada-Montana border.

“Since his first day in office, President Biden has made it his mission to undo all the progress of the previous administration, with complete disregard for the constitutional limits on his power,” said Texas Attorney General (AG) Ken Paxton on Wednesday upon announcing the lawsuit. Revoking the KXL permit “is not only unlawful but will also devastate the livelihoods of thousands of workers, their families, and their communities.”

Biden said when issuing the EO that approval of the KXL “would undermine U.S. climate leadership by undercutting the credibility and influence of the United States in urging other countries to take ambitious climate action.”

However, construction of the section is “effectively complete,” plaintiffs said in the complaint filed Wednesday in the U.S. District Court for the Southern District of Texas.

KXL is the fourth phase of TC Energy Corp.’s existing pipeline system in Canada and the United States. If completed, KXL would have capacity to deliver 830,000 b/d of Alberta oilsands from Hardisty, AB, to Steele City, NE. From there it would link with TC’s existing pipelines to reach refineries along the Gulf Coast.

The lawsuit argues that the Constitution gives legislators, not the Executive Branch, power to regulate interstate and international commerce. The complaint cites multiple studies showing that “the pipeline would have a negligible impact on the climate but significant impact on the economy and American energy independence.”

Biden also has paused oil and gas leasing on federal property and reentered the United States into the 2015 United Nations climate accord, aka the Paris Agreement. It is part of a larger plan to put the U.S. economy on a path to carbon neutrality by 2050.

Paxton said Wednesday the Democratic administration “continues to tout imaginary green energy jobs, without any recognition that their actions in the real world will make it impossible for hard working Americans to put food on the table.”

Biden and his cabinet have trumpeted the job-creating potential of decarbonizing the energy sector. However, some energy and construction trade groups have expressed skepticism about the quality of jobs in renewable energy versus oil and gas, and dismay at the revocation of the KXL permit.

“The power to regulate foreign and interstate commerce belongs to Congress — not the president,” Knudsen said. “This is another example of Joe Biden overstepping his constitutional role to the detriment of Montanans. There is not even a perceived environmental benefit to his actions. His attempt to cancel the Keystone XL Pipeline is an empty virtue signal to his wealthy coastal elite donors. It shows Biden’s contempt for rural communities in Montana and other states along the pipeline’s path that would benefit from and support the project.”

The plaintiffs argue that the states through which the pipeline would travel stand to miss out on “tens of millions of dollars in tax revenue” from construction and operation of the pipeline, highlighting that the cancellation eliminates about 3,700 construction jobs in Montana alone that would have garnered some $127 million in employment earnings.

The consultancy expects oilsands production growth to continue over the next five years, “but the pace of that growth may be heavily moderated by the outlook for infrastructure development in Western Canada,” said Coombs.

KXL is not the only crude pipeline facing an uncertain future.

Energy Transfer LP’s Dakota Access Pipeline was dealt a blow in late January as federal judges upheld a previous ruling vacating a crucial federal permit issued to the 1,172-mile pipeline that transports oil from the Bakken Shale to refineries on the Gulf Coast and in the Midwest.