Texas oil and natural gas activity rallied again in April, marking the fifth straight month of improvement as the industry continues to put the bust behind it, according to the Texas Petro Index (TPI), a barometer of upstream health. 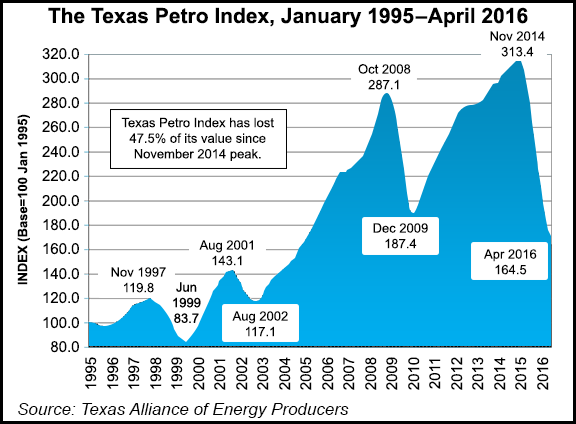 The TPI in April climbed to 164.8, marking its first year-over-year increase in 27 months, said economist Karr Ingham, who developed and maintains the index for the Texas Alliance of Energy Producers.

Components of the TPI that were up sharply in April included wellhead prices for crude oil and natural gas, the number of operating drilling rigs, well-permitting activity, and the value of Texas-produced oil and gas. Upstream oil and gas employment registered its first year-over-year increase since February 2015. Texas oil production was up more than 2% compared with April 2016.

“Texas producers are responding to higher wellhead prices that have resulted from coordinated efforts by OPEC, Russia, and others to curtail oil production,” Ingham said. “But in large part, production growth in Texas and the U.S. is keeping a lid on crude oil prices, which continues to frustrate parties to that agreement.” OPEC, the Organization of the Petroleum Exporting Countries, agreed in May to extend its production cuts to next March.

Ingham said the volume of crude oil being exported from the United States — about 1.3 million b/d — is only slightly less than the volume of crude the curtailment agreement has been able to remove from global markets. “Producers in Texas and across the U.S. will gladly take the market share given up by nations that attempt to manage oil markets and prices by centralized decisions to manipulate production.”

A composite index based upon a comprehensive group of upstream economic indicators, the Texas Petro Index in April was 164.8, up from 160.4 in March and a slight 0.3% higher compared with the April 2016 TPI of 164.3. Before the recent economic downturn, the TPI peaked at a record 313.5 in November 2014, which marked the zenith of an economic expansion that began in December 2009, when the TPI stood at 187.4.

Natural gas output surpassed 651.8 Bcf, a year-over-year decline of about 4.5%. With natural gas prices in April averaging $2.95/Mcf, the value of Texas-produced gas increased about 44.1% to about $1.92 billion.

“Upstream oil and gas companies have added more than 12,000 jobs in Texas in the past six months, providing growth momentum to the state economy rather than a drag as was the case for the better part of 2015 and 2016,” Ingham said.