Executives in the energy breadbasket of the country are forecasting Henry Hub natural gas prices to average $4.06/MMBtu at the end of 2022, according to the latest quarterly survey by the Federal Reserve Bank of Dallas. 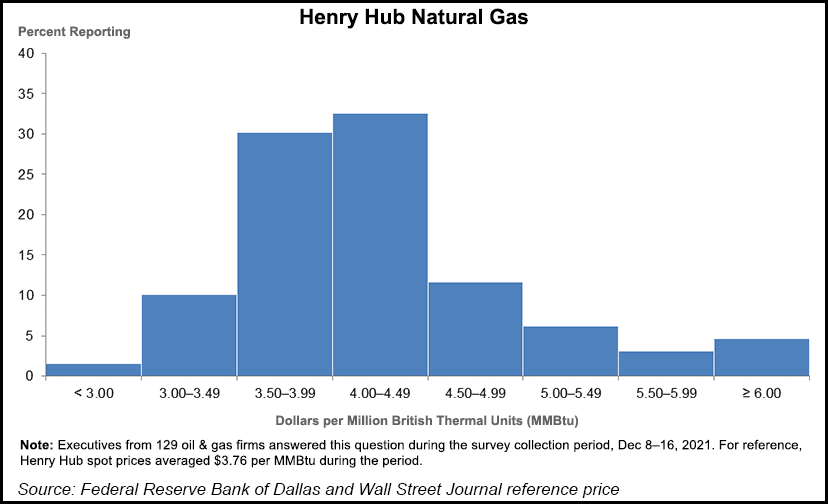 The Dallas Fed, as it is known, every three months surveys exploration and production (E&P) companies and oilfield services (OFS) firms headquartered in the Eleventh District, which encompasses Texas, Northern Louisiana and southern New Mexico. For the latest survey, 134 executives responded, including 90 E&Ps and 44 OFS firms.

The survey, conducted Dec. 8-16, queried executives about capital expenditures (capex) plans and commodity prices, among other things. They also were asked for their outlook on prices for goods and services. Overall, the region’s oil and gas sector continued to grow in the final three months, executives said.

Is Henry Hub Predicted To Strengthen?

For West Texas Intermediate (WTI) oil, respondents predicted a year-end 2022 price would average $75/bbl, with a range of $50 to $125. WTI spot averaged $71 during the survey collection period.

“The oil production index moved up from 10.7 in the third quarter to 19.1 in the fourth quarter,” according to the survey. “Similarly, the natural gas production index advanced seven points to 26.1.”

Along with rising output, costs also increased sharply for the third straight quarter.

Among OFS firms, “the index for input costs increased from 60.8 to 69.8 – a record high and suggestive of significant cost pressures,” said researchers. “Only one of the 44 responding OFS firms reported lower input costs this quarter.

“Among E&P firms, the index for finding and development costs advanced from 33.0 in the third quarter to 44.9 in the fourth. Additionally, the index for lease operating expenses also increased, from 29.4 to 42.0. Both of these indexes reached their highest readings in the survey’s five-year history.”

One E&P executive who responded to the survey said the industry “is working quite hard to bring oil and gas supplies affordably and sustainably in the transitioning energy landscape. The E&P industry needs bright individuals who know energy to change energy.”

Another exploration executive said the portfolio is being hedged “with a nod to invest in solar and tree farms. It is not a significant portion of our budget but is a learning opportunity.”

The primary goal for 2022, said one E&P executive, is to expand production while “simultaneously seeking divestment opportunities based on higher values.”

E&P executives also were queried about their firms’ primary goals in the new year. Given eight potential goals and asked to select the priority, 49% said “grow production.” Another 15% said “maintain production,’ while 13% prioritized reducing debt.

OFS operators are seeing improvements across the board, but the pace of growth in some areas has slowed. According to the survey, the equipment utilization index edged up sequentially from 47.8 in the third quarter to 51.1. The operating margin index remained positive, but it declined from 21.8 to 11.6. The index of prices received for services also remained positive, but it too fell from 42.2 to 30.3.

Asked to forecast how much the cost of their primary services could increase in 2022, the average response by OFS executives was 8.5%, with the median at 10%.

“Forty-five percent of executives identified increasing demand for service or product as the main factor that will influence the change in their firm’s selling price for next year,” researchers said. “Twenty-six percent said other input costs (besides labor), and 24% said labor costs. Five percent chose ‘other.’

Said one OFS executive, “Oil services, and in particular seismic data providers, are still largely in survival mode. Like most in the business, we expect that the lack of capital investment will drive supply stagnation, which will ultimately drive commodity pricing higher, which will create opportunities for those who do survive.”

Meanwhile, labor market indicators continued to expand in the final three months of 2021.

“The aggregate employment index posted a fourth consecutive positive reading, though it edged down from 14.0 to 11.9,” the Dallas Fed researchers noted.

Employment growth is being driven primarily by the OFS sector, with the employment index at 22.7 for OFS firms versus 6.7 for E&Ps. The aggregate employee hours index was nearly flat at 18.0. However, the aggregate wages and benefits index moved higher, from 30.3 to 36.6, which was a record high.

“Six-month outlooks improved, with the index remaining positive but declining from 58.9 last quarter to 53.2 in the fourth quarter,” researchers said. “The outlook uncertainty index fell to minus 1.5, with the near-zero reading indicating that uncertainty is relatively unchanged compared with the prior quarter.”