Not exporting U.S. crude oil is leaving billions of dollars on the table to be scooped up by Saudi Arabia and Russia, oil and gas interests said at a Texas House joint committee hearing Monday where lawmakers considered resolutions urging Washington to set U.S. oil free and hasten export approvals for liquefied natural gas (LNG). 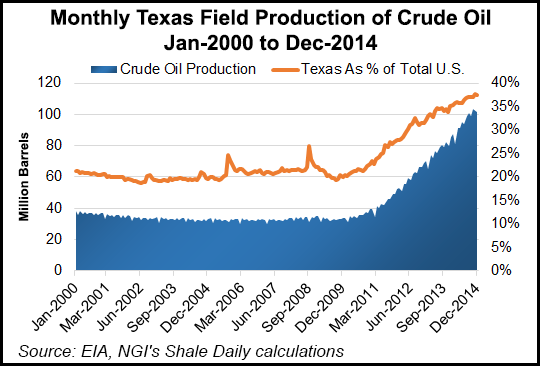 Craddick was joined by RRC co-commissioners David Porter and Ryan Sitton. “Not being able to export into the international oil market with every other country in the world makes us subject to volatile OPEC prices,” Porter said. “Currently, WTI crude is valued at around $50 a barrel, while Brent prices are roughly $60. That’s a 20% spread. With Texas producing about three million b/d…that’s about a billion dollar difference each month for our economy.”

Sitton described a vision of U.S. domination of global energy markets. Besides eliminating the crude oil export ban, Sitton would also revamp or eliminate the Jones Act, which requires that shipments from one U.S. port to another be carried on U.S. constructed, flagged and crewed tankers.

Also testifying was Helen Currie, Senior economics for producer ConocoPhillips, another proponent of lifting the ban on crude exports. She told the panel that she’s skeptical of the ability of U.S. refiners to adequately respond to the abundance of light crude coming out of domestic shale plays as they historically have been configured to process imported heavy crude. Further, she said, condensate, produced in abundance in the Eagle Ford Shale, is not an economic feedstock for U.S. refiners. Lifting the ban on crude exports would allow U.S. production to travel to the global refineries for which it is best suited, Currie said.

The hearing was held by the House International Trade and Governmental Affairs Committee, and the House Energy Committee.

It was focused on HCR 57, which urges the U.S. Congress to end the ban on crude oil exports, and HCR 63, which calls for quicker federal approvals of LNG exports.

Multiple producers and oil/gas trade associations said they support the measures but did not provide in-person testimony. One environmental group and one consumer group sent word to the committees that they oppose exports, but they did not send a representative to testify. Also opposing exports and filing written testimony was Jim Greenwood, vice president of government affairs for major refiner Valero. His written comments seemed to anticipate remarks by Currie about refiners ability to step up the challenge of shale oil output.

“Let me assure you that we are pleased to be buying significantly more domestic crude,” Greenwood wrote. “This drilling boom has reduced U.S. crude imports from 66% of U.S. refinery inputs in 2007 to about 45% in refinery inputs in 2014. Despite this significant increase in U.S. production, there is still not enough domestic oil to supply our refineries. In short, U.S. refiners will always need to import crude oil.

“However, there is a gross misconception that the existing refining configurations are ill-suited to absorb more light sweet crude. In reality, refiners have plenty of room to accommodate new, domestic supplies of light crude oil, with additional capacity to further grow U.S. production.”